The promo launched today ahead of the film's release on May 18. Trolli, Deadpool

Deadpool 2 opens in just over one week, and its titular smartass anti-hero is already inescapable. In the last couple of weeks alone, he could be seen starring in odd Celine Dion music videos and announcing his new job as creative director for a certain tequila brand. He even appeared in mock ads during Lebanon’s recent election.

As the latest chapter in its marketing onslaught, the Marvel property announced a partnership with Trolli, maker of gummy candies. The two brands have come together in a mashup of the brand’s “Weirdly Awesome” identity and the quirky hero to create Sour Brite Tiny Hands, a new line of snacks.

Trolli’s agency of record, Periscope, led the campaign. The Minneapolis indie shop handled everything from creating the videos and out-of-home work to designing our hero’s package.

The work alternately mimics and mocks fashion advertising with faux-risque copy and imagery. 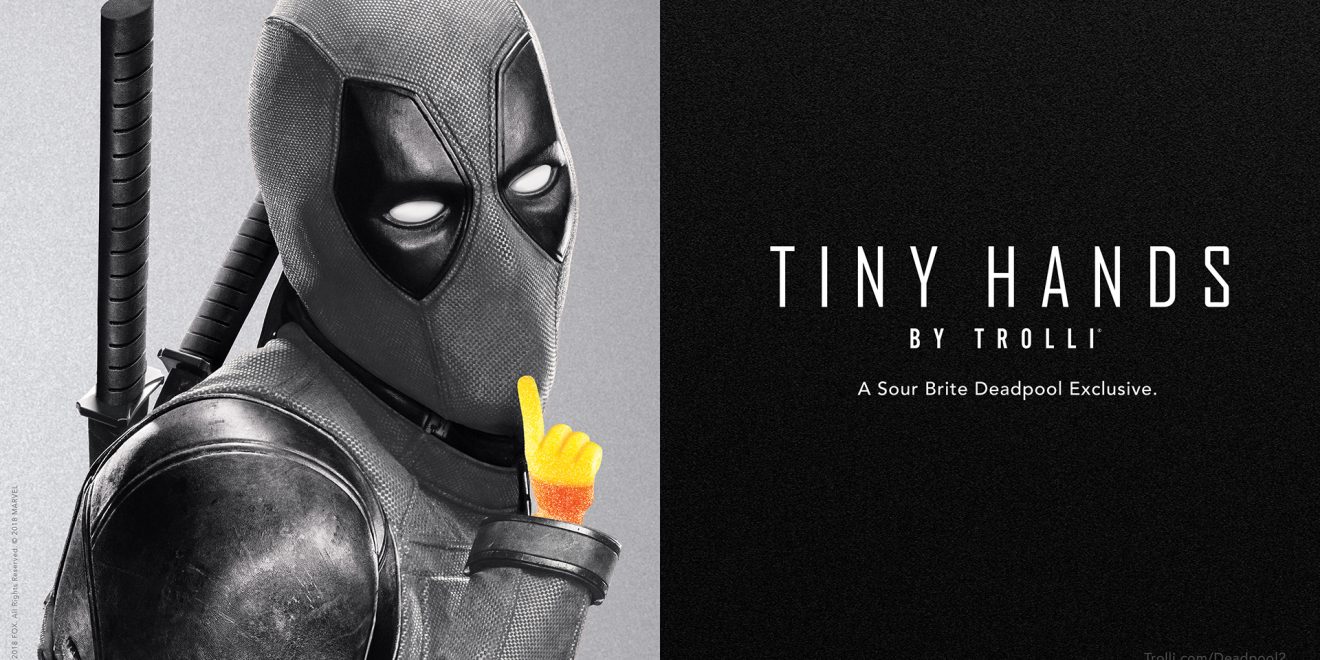 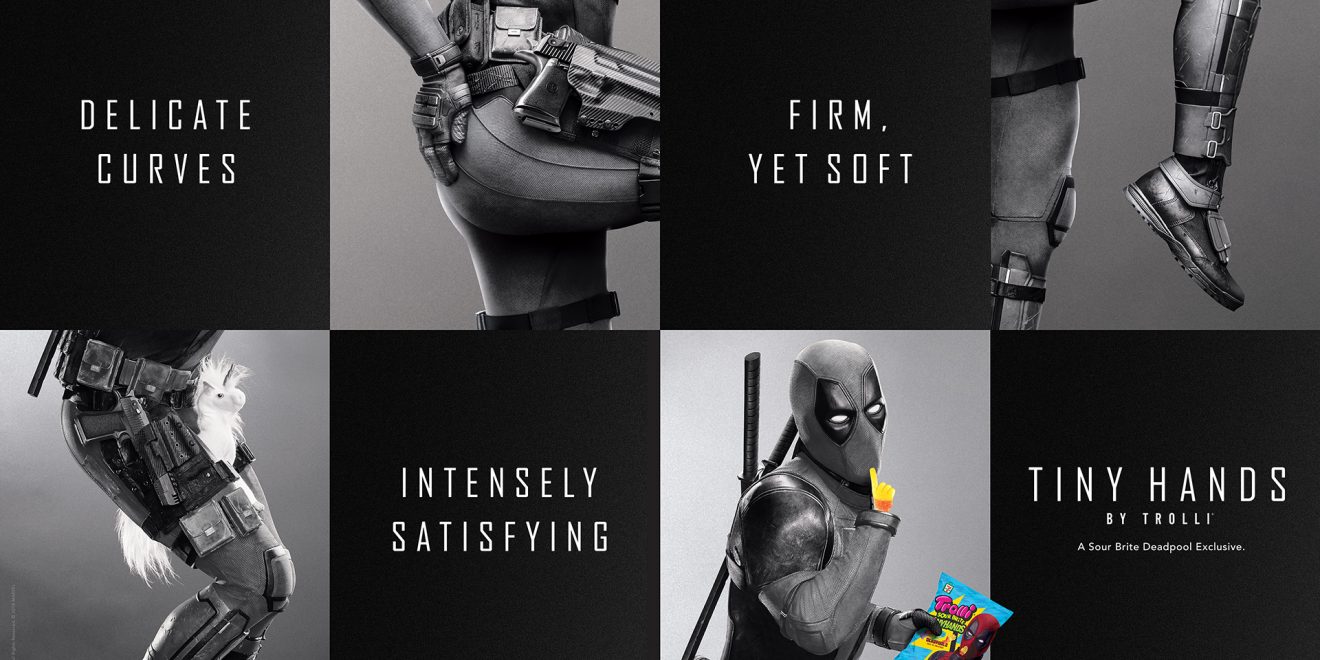 Fans will probably know that the small hands theme refers to a scene in the original film and the many memes it spawned.

The jokes practically write themselves. 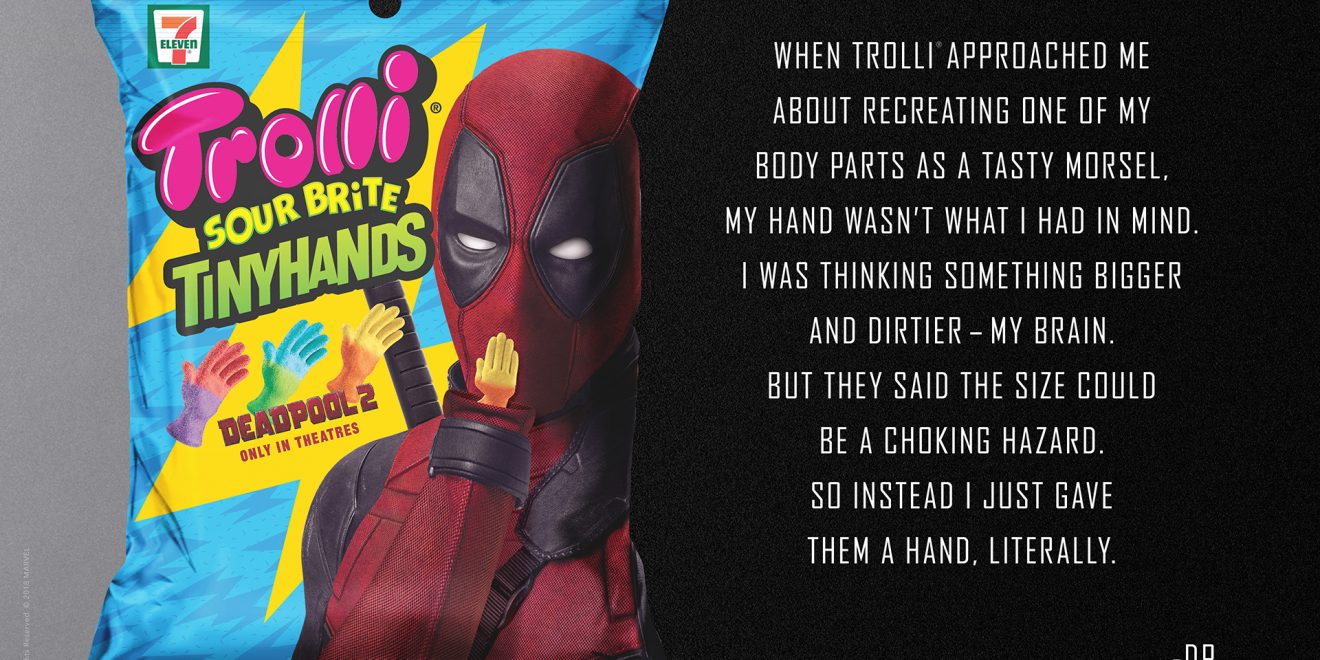 According to Trolli senior brand manager Allison Wyrwicz, everyone involved in the project knew from its early stages that “this cross-collaboration had to be something more than a traditional license agreement.”

Periscope CCO Peter Nicholson called it “a great creative challenge, because Trolli and Deadpool both have really unique voices.”

Creative director Dustin Joyce added, “I like to think of the creative work as a ‘tiny’ middle finger to traditional, predictable advertising. Trolli and Deadpool both thrive on being the anti-mainstream versions of their respective categories.”

Today in New York’s Times Square, passersby and Deadpool superfans alike are encouraged to take a #PackagePose as part of an activation that includes a sweepstakes and photo contest whose winners will be chosen via a “Tinder-syle interface” and “displayed (tastefully) online.”

If you're going to strike a #PackagePose, you've got to do it in #TimesSquare. Take a photo on the Broadway Plaza between 46th & 47th Sts with @Trolli_USA for the chance to be up on the big screen w/ #Deadpool. #TinyHands pic.twitter.com/qI9ZiR33LV

But the effort doesn’t just tie the Trolli and Deadpool brands together. For yet another bit of brilliant brand symmetry, these tiny little snacks will be available exclusively at your neighborhood 7-Eleven.