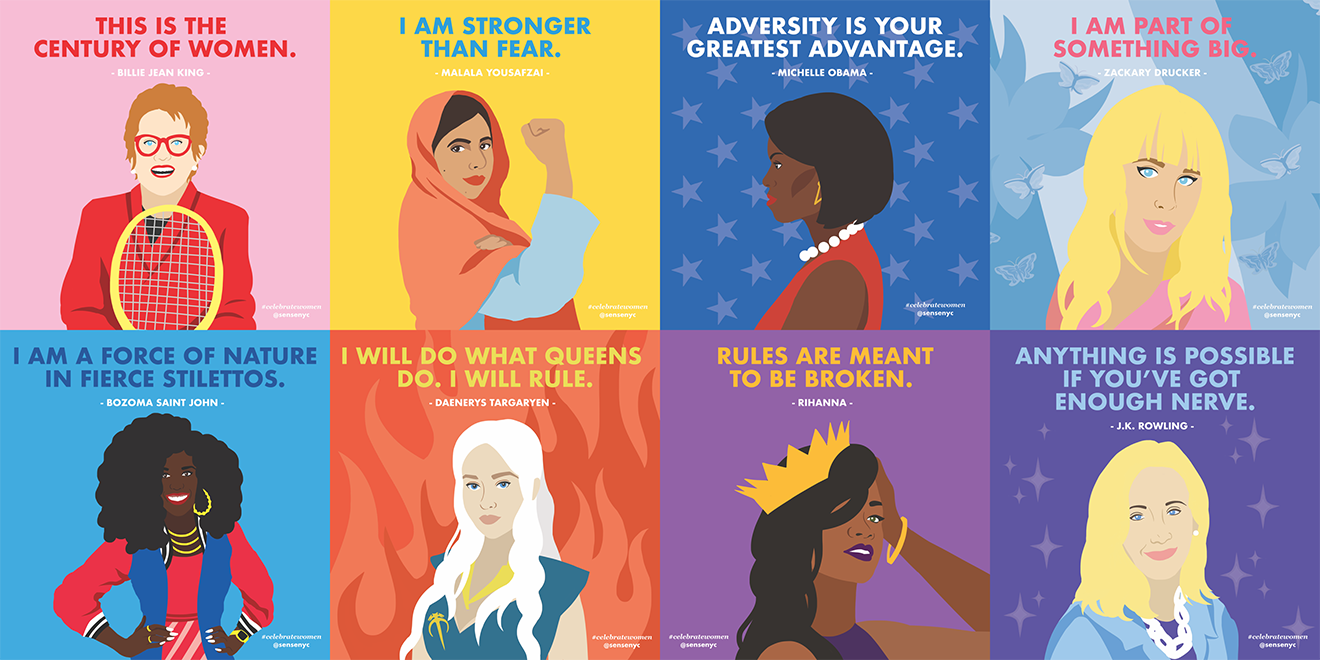 Agencies of all sizes made a point of recognizing International Women’s Day today as movements like #MeToo and #TimesUp increasingly move from the entertainment and media worlds to the ad industry.

Some agencies, including the New York office of creative shop Stink Studios, encouraged female employees to stay at home to show their male counterparts how critical their role is, while many kept things simple.

Grey partnered with nonprofit Catalyst to project the Venus symbol on buildings around the world, and Droga5 was so impressed that it gave a shoutout on Instagram.

BBDO New York launched “It’s Time to Redefine,” a PSA campaign calling for a reconsideration of the negative terms in some of the definitions of the word “woman” and replacing them with words focusing on the roles of individual women.

Ogilvy shared images of prominent female leaders and inspirational thoughts on social media with the hashtags #WomenOfOgilvy and #PressForProgress.

FCB Inferno of London created a set of “Queen Rules” cards that only included pictures of the titular matriarchs.

VML offered a unique take on the classic nonsensical game Mad Libs, distributing cards to its 33 global offices and asking staff to write positive messages to its female employees.

Minneapolis’ Colle McVoy hung a series of inspirational quotes by its female leaders on the walls of its office, where they will remain throughout Women’s History Month. The agency also created a montage on YouTube of the employees who contributed with their quotes and, in some cases, the people who inspired them.

Global creative agency B-Reel overhauled its website for International Women’s Day. Users who visited B-Reel.com today found not the usual list of campaigns and clients, but a prompt to donate to Women for Women International, which helps women in countries affected by conflict. Those who donate are encouraged to make their fund out in the name of a woman they admire and then send out a custom-made card to tell her.

The report reveals the buying habits and motivations of millennial women, calling them “purchasing powerhouses” while chipping away at some age-old stereotypes and noting that women control or influence 85 percent of the overall U.S. spending power.

A darker project from WPP-owned Brazilian shop F.biz uses the faces of accused harassers like Harvey Weinstein and convicted child molester Larry Nassar to promote local women’s rights group the Maria da Penha Institute. The copy cleverly turns “W.O.,” a Brazilian slang phrase meaning “winning because of the impossibility of a competition,” into “W.O.man” to show that offenders lose when women speak out.

Despite all the inspiring work, some issues remained. At The Guardian’s Changing Media Summit, Cindy Gallop called out WPP for its 14 percent median gender pay gap and the fact that the company continues to employ former JWT CEO Gustavo Martinez as the harassment lawsuit against him proceeds.

@kitten_mouse lindsay.rittenhouse@adweek.com Lindsay Rittenhouse is a staff writer at Adweek, where she specializes in covering the world of agencies and their clients.
@PatrickCoffee patrick.coffee@adweek.com Patrick Coffee is a senior editor for Adweek.