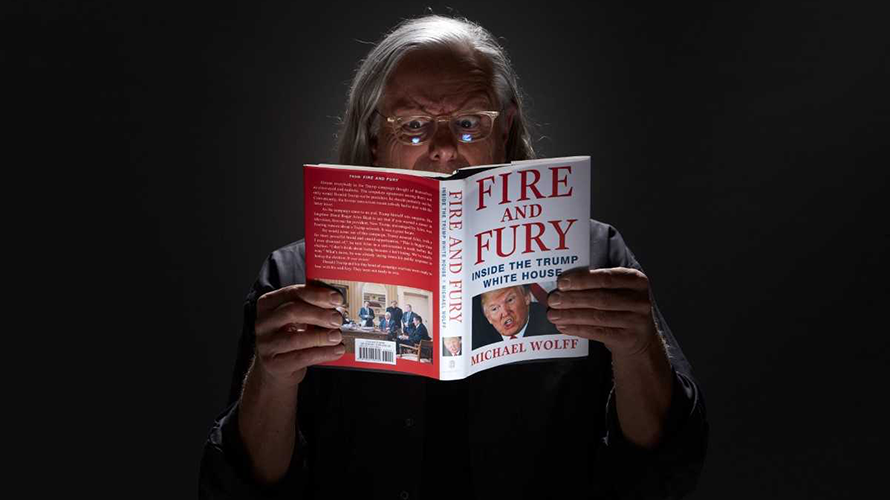 On first glance, Jeff Goodby and Michael Wolff might seem like polar opposites: one is the stoic creative director behind “Got Milk?” while the other is a journalistic firebrand happy to torch almost everything he touches.

But the two have more in common than one might think. Goodby was a reporter before he went into advertising, and Wolff spent a brief stint as the editorial director of a certain industry trade publication.

The two will take the stage together on the first day of this year’s Cannes Lions Festival to discuss Wolff’s smash hit “Fire and Fury: Inside the Trump White House.” Adweek spoke to both men in a preview of the event and the topics they plan to discuss.

Goodby—who has never been a Trump fan—sees advertising playing a key role in our unsteady media landscape. And while Wolff thinks journalism will ultimately outlive social platforms, he’s not so generous when discussing the Trump administration … or the ad industry.

Adweek: How has the response to your book so far differed from what you expected?
Michael Wolff: I’m a writer, so I expect a book to be treated as a book, rather than a political event. On the other hand, becoming a political event sure sold a lot of books.

To what degree did reporting from inside the White House for “Fire and Fury” differ from your past experiences in journalism?
It’s not that different. You keep your mouth shut and your eyes open. And you try not to be noticed too much. And you try to find some point of sympathy with your subject, because if you don’t care about them nobody else will. Probably my breakthrough perception about reporting on the White House was that I was able to ignore all the distance that we assume separates it from ordinary life.

How is this White House different from its predecessors? And what comes next for our country?
In some sense that’s the point, it bears no resemblance to any that came before it. It is not just managerially impaired at a historic level, but it is in service to a president who is temperamentally, verbally, morally, professionally and intellectually at odds with any president before. What comes next? I think Trump goes, but it will be bloody.

Jeff, as someone with a journalism background, what did you think reading the book? How would you deal with an assignment like that one?
Jeff Goodby: I admired the book a lot. More than any other reporter to date, Michael found a way to use his access to the White House to bring us a fresh meat smattering of snapshots that will affect the way we all see this administration from here on out. Hey, I can write quickly, but he brought us the news at a ridiculous, public service rate. This is an athletic writing effort. And by the way, if only 80 percent of it proves to be strictly borne out, holy Jesus Mary mother of God.

Did “Fire and Fury” change your impressions of Trump at all?
Jeff Goodby: Actually, it gave me more faith in some of the characters around the president. Perhaps a few of them will stick around and make a difference. OK, probably not. But while the book didn’t really change the rather shallow person I thought DJT was, it made me wonder whether a president could act in this totally willful, surface-skimming manner and somehow succeed in ways that the policy wonks haven’t.

Jeff Goodby: Social media is a form of journalism, but a dangerous one. It brings us an avalanche of first-hand reporting every day, yet our ability to judge the worthiness of our sources seems to constantly degrade. Will we stop discriminating? Will we accept “truth” instead of truth? I hope not. The future of journalism relies upon our ability to question shiny object news and find sources we can reliably trust.

How do you see advertising playing a role in that equation?
Michael Wolff: Advertising’s problem—one of its problems—is its diminished role in media, and, for that matter, American life. It’s a bit player. Even though social media is overwhelmingly ad-supported, there are so many advertisers none have any clout or meaning. That’s contributing to the power vacuum in social media that’s increasingly turning it into a social pariah. Anyway, I wouldn’t bet on advertising figuring out how to reclaim a significant role in the developing media world.

Jeff Goodby: Advertising will, of course, pay for it all, but in new and ingenious ways. Stopping the big corporate need for recognition, awareness and love is like blocking water with your feet—it ain’t going to happen. At the bottom of capitalism will always be the possibility of changing someone’s mind. And despite the new avenues of media, the best way to do that is still a big, sticky, shareable, gooey, pizza-cheese-pull of an idea.

Goodby and Wolff will hit the Cannes Lions Lumiere Theater stage at 11 a.m. on Monday, June 18.