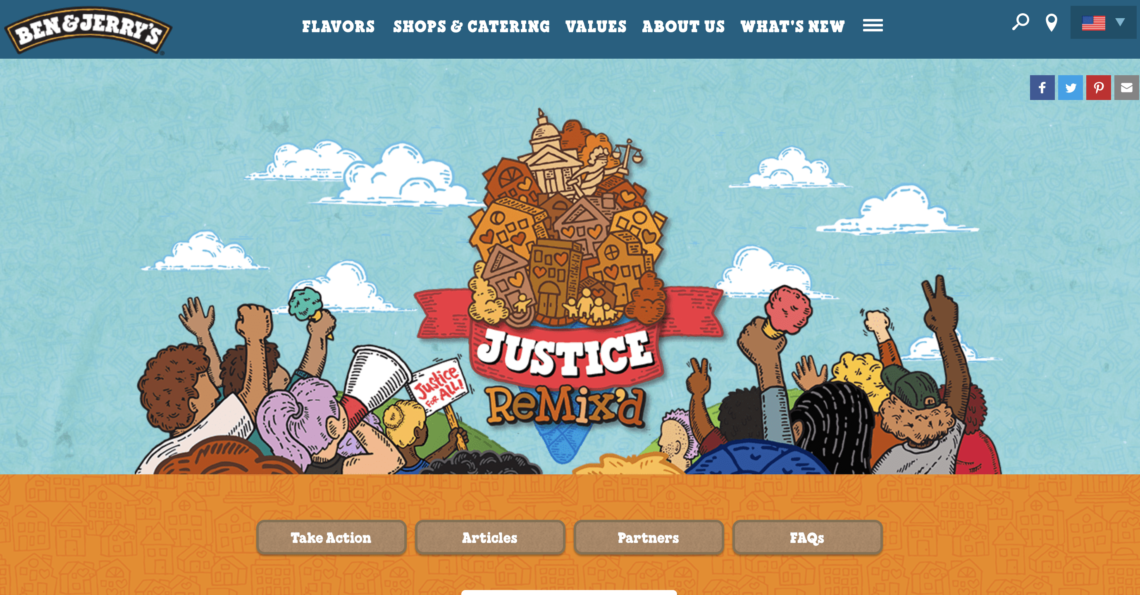 Get Louder recently collaborated with Ben & Jerry’s on the brand's Justice ReMix’d movement, which is focused on criminal justice reform. Get Louder

Cashmere, a Los Angeles agency specializing in marketing to multicultural millennials, is starting a division called “Get Louder” that will focus on helping brands craft and amplify their social good initiatives.

The venture is a partnership with Render, a firm founded by Dr. Rob “Biko” Baker that provides digital strategy and content creation services to social cause organizations. Earlier in his career, Baker served as executive director of the League of Young Voters, a nonprofit youth civic advocacy organization. Since founding Render in 2016, he’s worked clients including the Campaign for Black Male Achievement and Sankofa.org, a social justice organization founded by Harry Belafonte.

Together, Cashmere and Render will help not only brands, but also political campaigns and community organizations “tell powerful stories that impact social change” with the goal of reaching millennials and Gen Z.

Cashmere—which has worked on marketing for movies including Get Out and Black Panther in addition to campaigns for brands such as Adidas and Tanqueray—believes it’s uniquely positioned to help brands engage with and mobilize these demographics.

“[We’re] an agency that’s focused on culture, especially the culture of young people of color, [so] it’s essential that we have an understanding of what’s most important in their world,” said Ryan Ford, evp and chief creative officer at Cashmere. “ … As marketers who not only understand this space, but are members of these communities, it’s our responsibility to have a positive impact in these areas.”

Cashmere and Render have already kicked off their Get Louder partnership via a collaboration with Ben & Jerry’s, which involved providing strategic consulting to the ice cream brand’s Justice ReMix’d movement focused on criminal justice reform.

According to Get Louder, it also soft-launched last fall during the 2018 U.S. midterm elections by collaborating with organizations including NextGen America, the Haas Institute for a Fair and Inclusive Society at UC Berkeley and Woke Vote to drive voters to the polls for Alabama’s historic election.

While this partnership is technically new, Cashmere has been working with Baker for quite some time on a number of politically focused efforts. For instance, in 2015, the two worked with Snoop Dogg and other celebrities on a PSA called “Unload Your 401k,” which encouraged viewers to ensure that their retirement portfolios don’t invest in guns.

“Most political or social impact campaigns don’t use culture or art to inspire non-traditional voters. They’re communicating without using culturally nuanced and informed strategies to get people involved,” said Ford. “They’re also not talking about the things that are important, and Get Louder takes the opposite approach. We’ll speak to the important things that our audience cares about in an informed manner, because we’re already doing it every single day when we work across our other brand initiatives.”

While Get Louder hasn’t shared how exactly it will be involved with the Brown and Black Forums of America in the lead up to the election—or what, if any, other brand partnerships are in the works—Baker said the main goal of the division is to “increase millennial and Gen Z engagement” through political education, social cause activism for brands and civic initiatives.

“Get Louder provides a vehicle to mobilize these very important demographics to be more than consumers,” Baker said. “They can be the change agents and leaders to steer our country in a much better place. We’ve been doing it for years; now it’s time to bring it to scale. There’s too much at stake.”