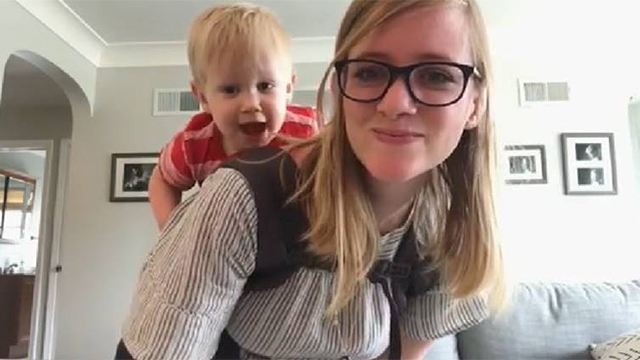 Sarah Latz with Henry on her back.

With a big smile and a baby carrier strapped to her back, FCB Chicago senior copywriter Sarah Latz says she’s ready for the 2018 Cannes Lions Festival.

Typically, the essentials for Cannes include sunscreen (apply frequently), your portfolio (lots of bigwigs to impress) and aspirin (for the morning hangovers). But the most important item on Latz’s list is her 1-year-old son, Henry.

After winning the #FCBSocialEye competition in which junior employees vied for a ticket to Cannes, Latz is going to the festival this year as the IPG network’s first “working parent correspondent.” In that role, Latz—and Henry—will be covering a range of topics around culture and inclusion while connecting with other parents in the advertising world.

After watching Latz’s adorable #FCBSocialEye video entry in which Henry helps his mom explain why they should be on a plane to France (as much as a 1-year-old can), it’s clear why they won.

Henry even rehearsed his lion’s roar.

The purpose of the initiative is not just to remind the biggest names in advertising how cute one little boy can be. Latz said she wants to “normalize” working parents in the industry, especially at a giant festival like Cannes. Travel unquestionably comes with the job, and Latz said no one should have to choose between their career and their family.

It’s especially important for her message to reach women, Latz said, because a majority of adwomen don’t think they can stay in the industry once they have a child. She admitted she was part of that group until FCB showed her she can both have a family and a thriving career at the same time.

“I have support from my immediate leadership; that’s the biggest thing,” Latz told Adweek. “I just do my best every day and keep plugging along, and truthfully, I love it.”

She added, “You can still go to Cannes if you have kids.”

Brandon Cooke, FCB’s global chief communications officer, said that when the agency saw Latz’s “authentic and compelling” #FCBSocialEye entry, “it was a no brainer … we thought, why wouldn’t we support this?”

“We love this idea,” Cooke added. “Obviously, Sarah had an incredible submission and we are looking to support it year after year.”

He said events like Cannes typically exclude parents, especially new ones, who can’t commit to working around the clock (or flying across the Atlantic) when they have young children to care for.

Cooke also said FCB will work with Latz to coordinate a schedule at the festival that works for her and Henry and that, every year going forward, the agency will deploy a working parent correspondent until the idea of kids coming to Cannes is normalized “somewhere down the road.”

Both men and women can apply.