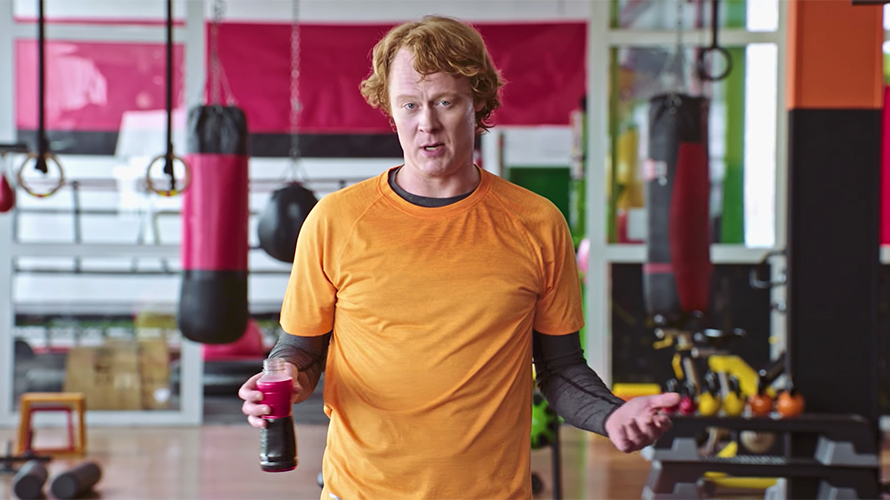 Vitaminwater active's "sorta-fit sportsguy" is a relatable gym character for "the rest of us." vitaminwater

For the national launch of vitaminwater active, which was released regionally last year, the Coca-Cola brand wanted to let audiences know the sports drink is not just for fitness fanatics. The brand turned to Los Angeles independent agency Zambezi for a personification of its positioning as “a sports drink for the rest of us.”

Zambezi’s campaign centers around a 30-second spot starring a “sorta-fit spokesguy” working out at the gym but, you know, not taking it too seriously.

So what does “sorta-fit” mean?

Well, he works out, but you won’t find him taking his shirt off anytime soon. And while he may lift weights, he doesn’t check himself out in the mirror while doing so.

The spot’s most relatable line may be its kicker, in which he admits he just skips the gym altogether when it’s tough to find a parking spot.

“Our sorta-fit guy shows people they can exercise at a pace that works for them without taking themselves or their workouts too seriously,” Zambezi associate creative director, copywriter Tal Wagman said in a statement. “Vitaminwater active is the sports drink for the rest of us. Or said another way, it’s for anyone who wants to comfortably dip his or her toe into the fitness pool. And of course, the pool is filled with vitaminwater active.”

In addition to the spot, which is the first of a series with more to follow later in the year, the campaign also includes point-of-sale elements, OOH ads around gyms, parks, hiking and running paths in major cities and experiential marketing targeting gym-goers in high-traffic fitness locations.

“The sports drink category has traditionally focused on athletes at the top of their game, those we’re ‘supposed’ to aspire to be,” The Coca-Cola Company senior IMC manager Alex Ames said in a statement. “Vitaminwater active is the sports drink for those of us working to improve our fitness level without taking it to a level of obsession.”

Music Supervision: Wolf at the Door