Before June 15, 2020, there were no nondiscrimination protections for LGBTQ people in these states. Movement Advancement Project

Who Should Lead Discussions on Racial Justice, Diversity and Inclusion?

What makes for a meaningful discussion about racism? One person, via emailed, called out longtime D&I advocate Cindy Gallop and Zeitguide CEO Brad Grossman ahead of a discussion about racism because the Zoom session didn’t include a Black panelist. His criticism sparked a debate, which Gallop addressed, explaining that Black people should not have to carry the burden of educating colleagues on racism.

While the Black leaders we spoke to for this story agreed that non-Black people can carry the torch and educate others on systematic racism, they also pointed out that no discussion is complete without the Black perspective.

Go inside the topic: Julianna Akuamoah, of Arnold + Havas Media Boston, puts it best, “Black voices matter. Invite us and let us decide if we want to join. Or better yet, sit in on the panels that we’ve created.”

It’s No Longer Legal to Fire Someone for Being LGBTQ, Supreme Court Rules

In a landmark decision for LGBTQ rights, the Supreme Court ruled Monday that it is illegal to fire someone for their gender identity and sexual orientation. For the advertising world, that means that employees in states without prior protections are now protected by federal nondiscrimination laws for the first time. The decision was a reassuring step for many in the industry after the Trump administration removed LGBTQ people from nondiscrimination protections in healthcare last week.

Read more: LGBTQ advocates and companies across the industry are lauding the decision as “an incredibly victory.”

Even as Gyms Reopen, the Pandemic Will Still Impact How and Why Consumers Exercise

Fitness brands including Orangetheory and Planet Fitness have had to get creative in quarantine, developing virtual solutions such as livestreamed workouts and online content to get families moving. As gyms reopen, many will return seeking social connection, but expanding digital and hybrid models even after lockdowns lift lends the industry an opportunity for expansion. “If you’re trying to build a digital business, now is the time to step on the gas because now everyone is a potential customer,” says Allen Adamson, co-founder of Metaforce and professor at NYU Stern.

Analysis: We talked to experts about what that looks like for the fitness sector.

As the coronavirus spread, so did unsubstantiated conspiracy theories about 5G, including one that that wireless waves from towers compromised immune systems and led to more Covid-19 infections. By May, arsonists had burned dozens of towers across the world because of these fears. The FCC recently warned that these evidence-less fears could hinder the rollout of service and hurt the U.S.’s position in the international 5G race.

For Adweek Pro Subscribers: Twitter and major carriers have been taking measures to combat misinformation and reassure the public.

Dive deeper with an Adweek Pro Subscription, your key to the inside scoop on the marketing and advertising trends and reporting that guide the world’s top brands.

True or not, a common excuse for a lack of diversity among agencies is that professionals of color can be hard to find. Copywriter Chelsea Curry and motion designer Martin Warszawski of Swift teamed up with freelance art director Stephanie Yun-Ju Mitchell to develop a hack to solve the problem: On Google or LinkedIn, users can search for terms like “copywriter” and “art director” along with c0ffe3, a stylized version of the word “coffee.” Talent who have put the term on their websites, portfolios and profiles will appear.

Here’s How Marketers Customize Advertisements Just for You

In our latest episode of How S#it Works, Suraj Gandhi, svp and global head of the Addressable Content Engine at UM Studios, explains addressable creative, which enables brands to tailor their messaging to the specific audiences for whom it’s most relevant. Watch below:

Ad of the Day: Harlow Monroe Is a Transgender Woman With an Unlikely Dream in Short Film for Diesel

Quote of the Day 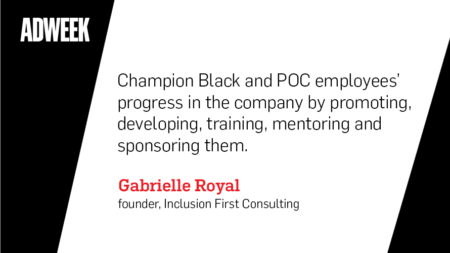 In a new Voice piece, Gabrielle Royal, founder and principal consultant of Inclusion First Consulting, offers four ways companies can uplift Black voices in celebration of Juneteenth and beyond.

More of the Latest