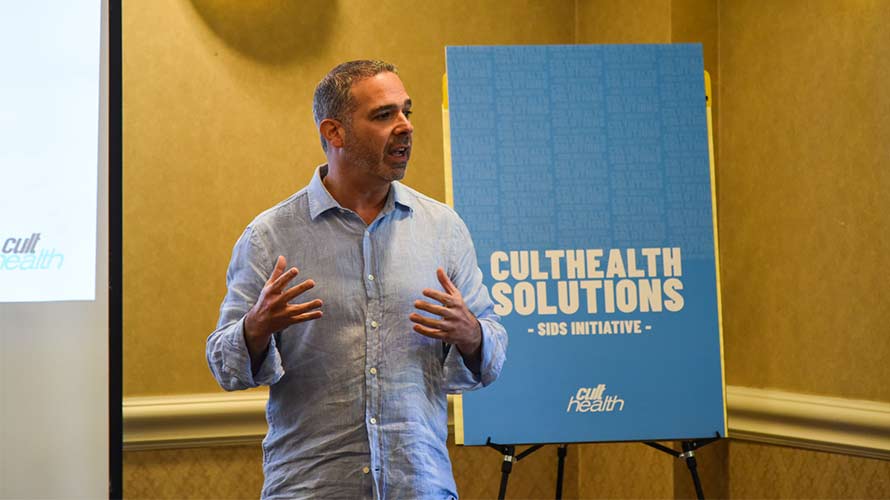 It’s not unusual for agencies to spend time working on passion projects for causes outside of typical client work. An agency completely shutting down billings and devoting all of its employees to working towards such a project, however, is unique.

CultHealth, a healthcare-focused subsidiary of Cult360, did just that this week. Beginning on Wednesday, the team shifted its focus to coming up with ways to fight Sudden Infant Death Syndrome (SIDS) in one specific market.

It all started when agency co-founder Jeff Rothstein learned that a number of educational initiatives in the 1990s led to a decrease in deaths from SIDS, which then leveled out and have recently started to trend back upward. Rothstein wanted to do something to help combat the disease and decided to approach the problem with a very specific brief.

Rothstein said the agency has a “great group of creative talent who really wanted to have additional opportunities to do good and meaningful things.”

“We can educate people. We can figure out how break through all the noise the clutter and create behavioral change to change save lives,” he said.

CultHealth reached out to Alison Jacobson, CEO of national SIDS nonprofit First Candle, and Harvard professor of pediatrics Dr. Richard Goldstein, who also leads the SIDS research program at Boston Children’s Hospital. Jacobson and Goldstein briefed the agency and educated them on the issues surrounding SIDS.

"We can educate people. We can figure out how break through all the noise the clutter and create behavioral change to change save lives."

As a smaller agency, CultHealth didn’t want to attempt to address the issue on a national scale, Rothstein explained. Narrowing their focus on a single market allows them to “become part of the community, leverage different channels within it and proving we can [make] a measurable difference,” he said.

The agency singled out the New Haven, Connecticut area for a number of reasons: Connecticut has one of the higher rates of SIDS in the country, and New Haven has both a high population of African Americans—who are disproportionately affected by SIDS—and one of the best medical communities in the country.

The agency “completely supported” and “rallied” around the idea, he added, deciding to approach it with a “hackathon-type model.”

“The entire agency is on this. We’ve closed our agency,” Rothstein said. “Everyone from creative teams [to] account teams, finance teams, operations teams [and] project mangers” is working on the project, he added.

Starting on Wednesday morning, the agency divided its staff into teams to brainstorm concepts to reduce the risk of SIDS in the New Haven community. The cutoff deadline was 1:00 p.m., which was followed by rehearsals in front of agency partners.

The judging panel will pick a winning concept for the agency to execute, primarily on the criteria of an idea that can extend across multiple channels, including “parents in their homes,” “doctors and nurses in maternity wards of hospitals” and daycare centers, according to Rothstein.

He said the idea could be a creative or social media campaign, an educational campaign, a product innovation or any combination of these. He gave the example of sleep environment, which is one of the “core risks” for SIDS; an area of focus could be “creating sleep environments for infants” that reduce risk, based on guidelines by the American Association of Pediatrics—namely, parents putting babies to sleep on their backs, in cribs free of “anything soft or plush … that could lead to accidental suffocation.”

“There are a lot of cultural factors that go into the types of environments that babies sleep in,” he added. “We’re up against some pretty strong headwinds in terms of changing culture and getting people to feel comfortable with putting their baby to sleep in a very bare crib.”

Each was asked to identify specific metrics along with their proposal that can track progress. Once a concept is selected, the agency will work on bringing it to life in the coming months, most likely aiming for an execution timed around SIDS Awareness Month in October.

As an advertising agency, CultHealth couldn’t help but brand the approach for the initiative, settling on CultHealth Solutions. Response from agency employees and clients alike has been overwhelmingly positive, according to Rothstein.

“We, of course, sent out notification in advance to all of our clients” letting them know the agency would be focusing on the initiative, he said, “and their response was so overwhelmingly positive and supportive”—so much so that the agency broadcasted the final presentation on Facebook live at their request.

In light of the positive response, the agency plans to pursue similar projects in the future. Of course, shutting down the agency every week isn’t exactly doable, but Rothstein envisions pursuing one or two CultHealth Solutions projects annually.