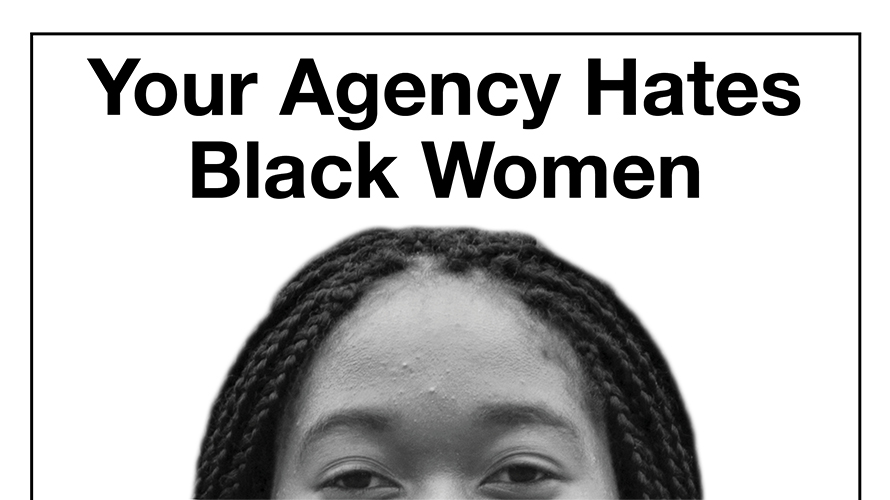 The ad industry is abuzz over a cover letter posted on Facebook this week that opens with a line sure to make any talent scout do a double take: “Your Agency Hates Black Women.”

Aspiring junior copywriter and recent Fashion Institute of Technology graduate Alysia Lewis shared the post in a Facebook job group. She followed her remarkable opening salvo by using the recent Pepsi Kendall Jenner controversy as a symbol of the ad industry’s seeming inability to avoid shooting itself in the foot.

In a concise summary of every creative’s worst nightmare, Lewis wrote, “You don’t think it’ll happen to you. But one day you and your team will be sitting and brainstorming and someone will say: ‘Why don’t we use ‘finna’ in this headline?’ And it will all come crashing down.”

The post essentially doubles as an ad for Lewis herself. It also lightly scolds agencies for their history as “echo chamber[s] of ass patting and cigar smoking,” includes confessions like, “I won’t be bright-eyed because I’m already dead inside,” and details the ways in which Lewis’s talents can benefit the company that hires her.

Most ad agency job applications don’t get noticed by recruiters, much less trade journals. Some rare exceptions have included an account services intern’s cover letter starring a Lego version of herself, and Wunderman DC chief creative officer Tuesday Poliak’s decision to turn her application into a series of wallets customized to appeal to creative directors.

Adweek spoke to Lewis about the note, her ambitions and what Jenner exposed about today’s agencies.

Adweek: So your ad, if we can call it that, is getting a lot of attention in the agency recruiting world. What were you thinking would happen when you posted it?
Alysia Lewis: I wasn’t going to post it at all. I made it to be my cover letter because my resume is kind of boring and I don’t have much copywriting work. Then I sat on it for a week, applied for a few jobs and thought, maybe if I post it on Facebook it will get a little attention.

Well, it definitely worked. The headline itself is very…
Provocative?

That’s the word I was going to use! Was it aimed at “generic white male” creative directors or talent scouts?
Agencies are very white, but I didn’t mean to tell them, “You’re a terrible person.” It’s more of a joke like, you’re awful, sure, but you’d be 10 percent less awful if you hired me. 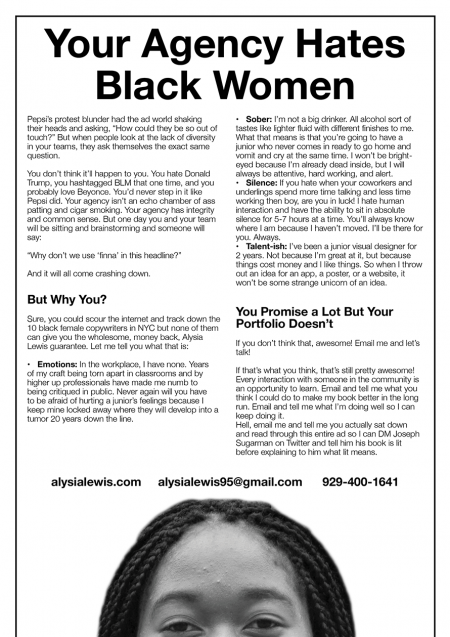 Ha! It then opens with an aside about the Kendall Jenner Pepsi fiasco, which felt very appropriate.
When that happened, the first place I read about it was a gossip site, because that’s what I do with my life. Then it was a conversation for like two weeks. My classmates wondered, who could possibly be so shielded and tone deaf to think this was a good idea? Agencies think they’re doing something so great, but it turns into a laughingstock that you can’t get away from. Nobody ever wants to think they’re racist; that’s a white person’s greatest fear. And I didn’t put it out there to make anyone feel too badly about themselves. Everything I do is twofold, and I put in a layer of humor. That’s kind of who I am.

You also included a line about tracking down “the 10 black female copywriters in New York City.” Was that based on anything in particular?
I don’t think that advertising, from what I’ve seen, is something that black women get into. I was the only black person who graduated from my [advertising design] program at FIT. Everyone was in fashion design or the business of fashion.

You describe yourself in very self-deprecating terms. Are you playing a character or is this just you?
I am a generally sarcastic, deadpan person … my mother says she can’t tell when I’m being sarcastic. But I’m just trying to make the most boring employee you will ever have sound more interesting. In my current job [at the Queens Library] I sit in the back of the production room in silence, listening to ABBA for six hours at a time. And I’m OK with that! I don’t like to hang out with people, I like to sit in my room and do puzzles. How do you spin that?

So when you wrote in the Facebook post that you are a “Junior CW looking for a home and to make you feel bad about your taste in Disco,” that was for real?
Yes, I love disco. I wasn’t joking about that.

You’re working as a designer but you want to be a copywriter. Can you explain that a little bit?
When I talk about being a designer people say, ‘She’s trying to be a jack of all trades and master of none.’ But this is a job, not a career, and graphic design is not something I plan on sticking with. Copywriting is what I went to school for, and it’s what I enjoy.

On that note, what inspired you to write a cover letter in this way?
I need a job. I went into post-grad, postmortem panic almost immediately [after graduation]. I changed out of my heels and thought, oh God, I wasted my life, my dad was right. He asked me how long it takes to become a lawyer and I thought … I need to get some interviews.

Did you have any specific inspiration?
I thought maybe this was a sign to work on my portfolio. I Googled the best books to read, and Joseph Sugarman’s Adweek Copywriting Handbook was first on the list. It wasn’t particularly sexy as it was mostly really long copy ads. But he said that he’s created companies … and made millions of dollars, and I thought, that’s what I need. So I wrote it based on his guidelines: You need a really good headline and then write stuff that makes them keep reading. His big thing is the slippery slope, where the headline brings you close to the edge, and then every sentence pushes you closer and closer until you slide down and decide you want to buy something.

And in this case, that something is you!
I’m planning to DM him to say, ‘Your book is lit.’

So what has the response been like since you posted the letter two days ago?
It’s a little overwhelming. I’ve heard from a couple of recruiters, a couple of other juniors and others just saying, you’re doing a really great job, keep it up. I’ve been sending thank you notes, and I have something like five phone interviews scheduled and several calls to visit agency offices. The next three weeks are booked up … so many people have been offering to talk.

Have you been on any interviews yet?
Not yet. Again, I didn’t really expect such a strong response because I didn’t think the letter was very original. Of course a copywriter would write an ad with lots of copy about themselves if they wanted a job! I like to keep a full day open for interviews because I’m a very nervous person, and I need an entire day to prepare.

Are there any agencies or creative directors you’d like to work with?
I’ve harassed Anomaly’s HR person, and they’ve already taken me on a tour. I’m a really big fan. But I feel like a bad creative because I don’t pay much attention to agencies.