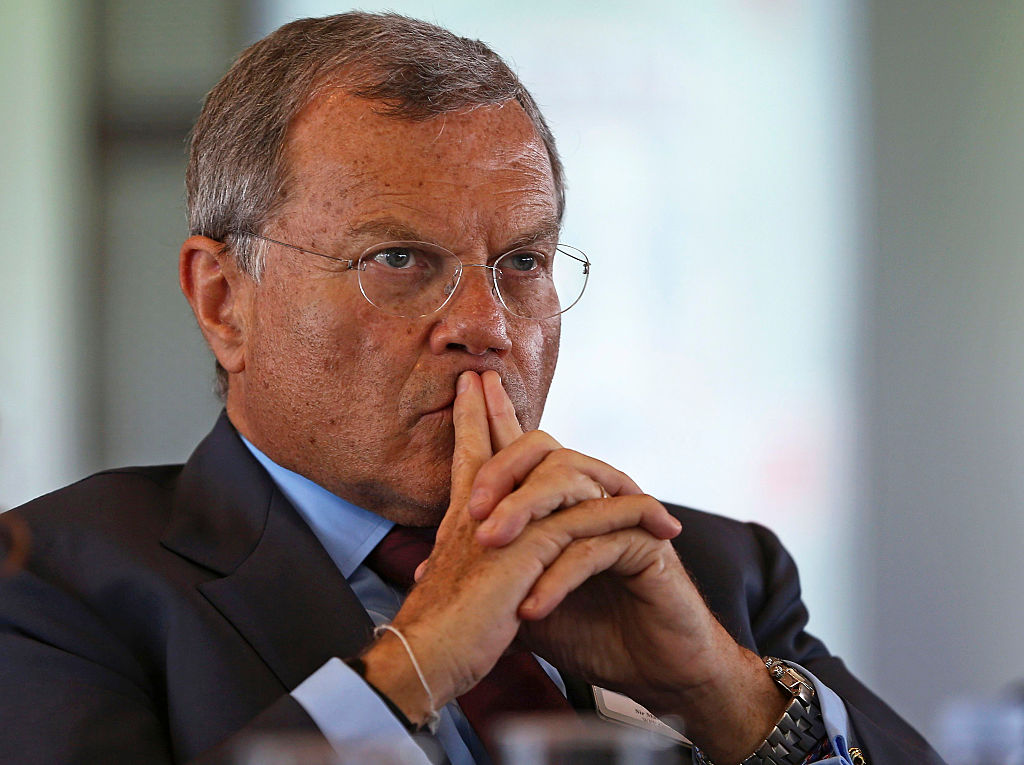 WPP suffered its worst stock drop (14 percent) in nearly two decades, it announced today during an earnings call in which CEO Martin Sorrell bluntly admitted that 2017 was “not a pretty year” for the world’s largest holding group.

The global business failed to meet even analysts’ most conservative predictions for growth, and WPP’s presentation called 2018 “slow to start” with like-for-like revenue flat. The market’s response was so dramatic that it affected the stock prices of competitors Omnicom, Publicis and IPG.

Sales for WPP were particularly weak in China and North America last year, with total revenue down 4.4. percent and 2.5 percent for the year, respectively. The U.K. served as the report’s lone bright spot, with revenue rising 4.9 percent in the group’s second-largest market.

The reasons for the drop are deceptively simple. Big spenders like P&G and Unilever have very publicly announced budget cuts to eliminate waste, while advertising continues its ongoing pivot to digital as more and more consumers make their purchases online. GroupM futures director Adam Smith noted that ecommerce sales are rising faster than internet usage rates, a trend he attributed to “flexitarians” and “picky millennials” avoiding both big brands and traditional brick-and-mortar retailers. 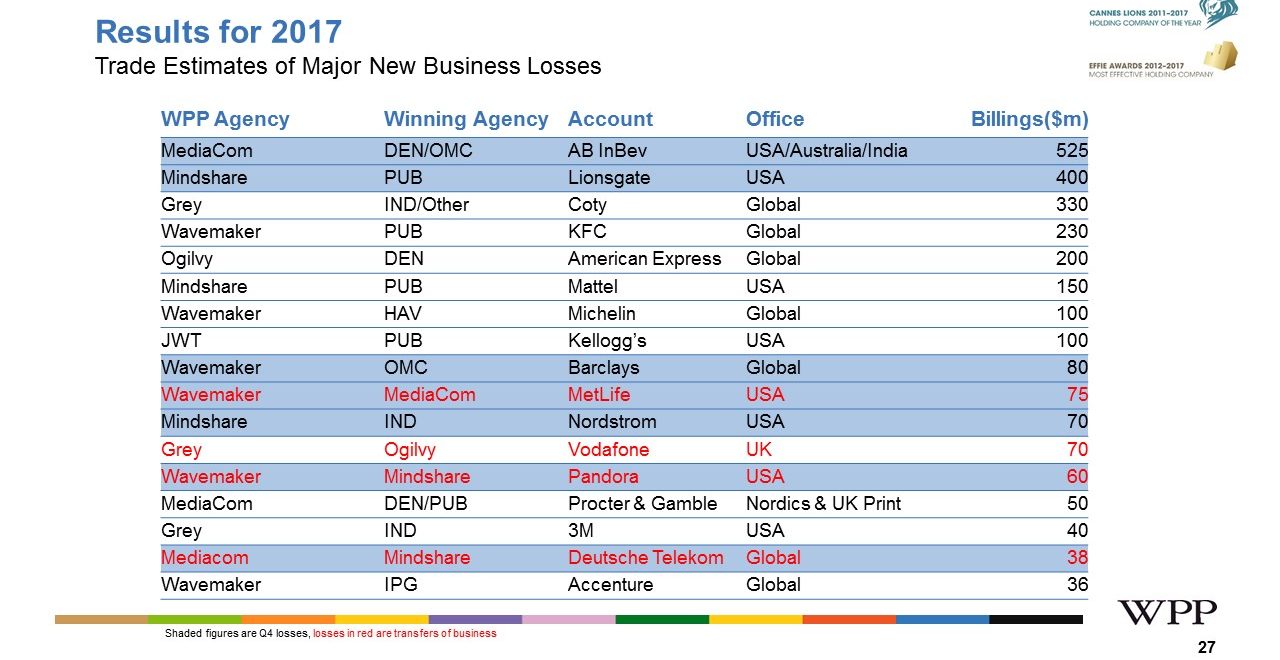 “Our financial model has changed in light of what’s happened in the past year,” Sorrell said on the call, adding that WPP is “heavily involved in digital strategy and disruption with clients.”

A major element of that change is addressing the problem of clients “increasingly in-housing their activities,” as Sorrell put it, by hiring teams to handle tasks, like content production and programmatic ad buying, that once made up a significant proportion of ad agencies’ profits.

A potential solution comes in the form of WPP platforms like GroupM’s Xaxis for buying and Hogarth, the production division that recently announced new global partnerships with Ogilvy and Grey. Sorrell claimed Hogarth has tripled its revenues over the past four years, saying, “There is a misunderstanding; we do collaborate with clients on building in-house facilities.”

WPP also heavily hinted at plans to consolidate more of its agencies this year only days after announcing it would combine PR firms Burson-Marsteller and Cohn & Wolfe to create Burson Cohn & Wolfe. That news followed 2017’s merger of MEC and Maxus, which created Wavemaker, and January’s decision to create Superunion from five consultancies and design agencies.

The group refers to this trend as “horizontalizing.” 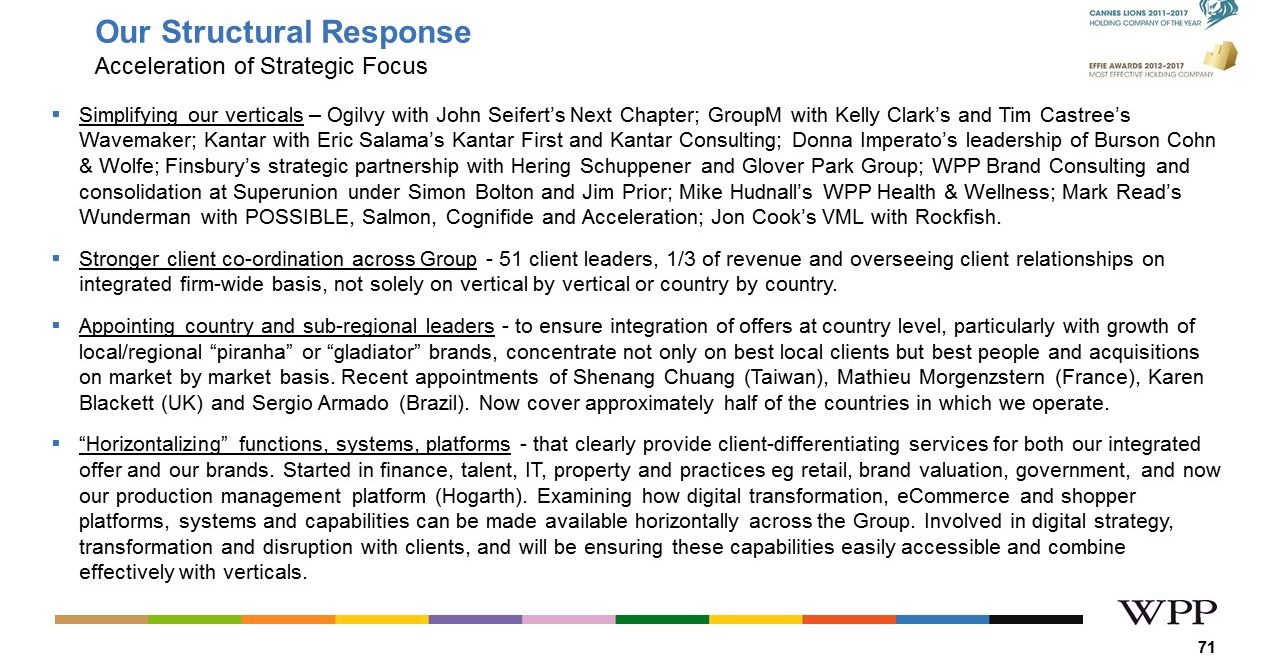 Analysts at Barclays were skeptical, however. The firm’s report argues that WPP is not going as far as competitors, including Publicis and Havas, to streamline its business, stating, “This seems to be more of the same but faster as opposed to a more radical rethink.”

The highly cited Brian Wieser of Pivotal Research Group offered a contrary take, upgrading WPP’s status to buy and arguing that traders have overreacted to the results.

“We’re mindful that the results reinforce a negative narrative towards agencies in general and WPP in particular,” Wieser’s report read. “However, we think that between the conservatism embedded in current year expectations and our view that relatively normal growth trends will eventually resume—although probably not until 2019 for WPP, let alone the industry.

Sorrell once again downplayed the common narrative that consultancies like Deloitte and Accenture are encroaching on his company’s turf, describing it as “fake news” in a slide that showed WPP winning a majority of pitches in which it faced off against such companies. 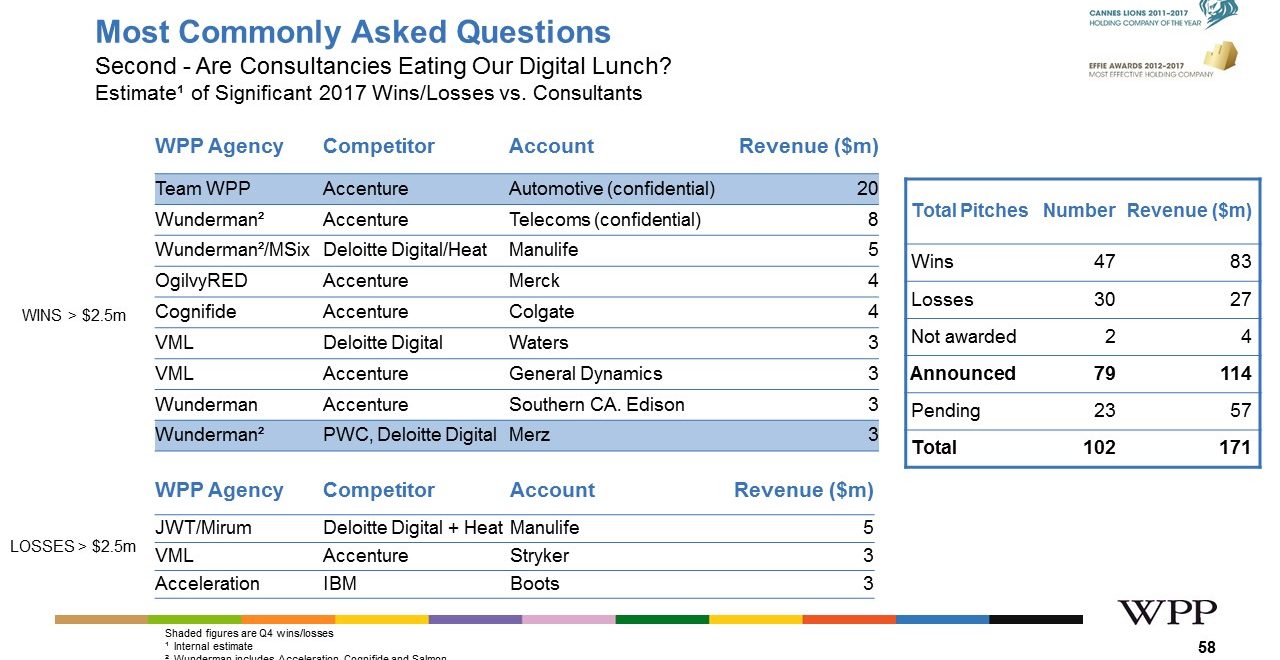 He said consultancies are “trying to invade the digital space” by advising clients on how to reduce their budgets. WPP believes that it will have “more in-house consultancy opportunities,” seeing them as growth opportunities rather than threats.

This statement is in keeping with changes at media agencies, which have been forced to re-examine their business models by relying less on sales as a source of revenue.

Despite the somewhat varied analyses, there is no doubt that today’s results leave WPP in a defensive position for the time being.