Super Bowl is basically advertising’s Christmas. (Although, so is actual Christmas.) These two iconic moments in the adland calendar are when the industry goes all out. However, these two occasions seem to have different rules to the rest of advertising. Christmas ads seem to compete on schmaltz, charm and story. Super Bowl ads compete on pure entertainment. All other advertising competes on ideas. 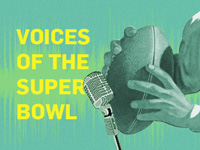 While the main point I’m meandering my way toward applies to both Super Bowl and Christmas advertising, it is Super Bowl season, so let’s forget about Christmas for a moment.

All too often, Super Bowl advertising chooses entertainment over ideas: famous people, music, script humor and so on. And while I love Super Bowl humor (so much so that it should take out a restraining order on me), entertainment alone will never be as powerful as a true idea delivered in an entertaining way.

Here are a few spots that I think had that perfect balance.

A perfect idea. Despite the NFL having access to arguably the greatest talent you could hope for on game day, they chose a simple idea to make the point that America loves football. They took a fact about how much the game can influence relationships and even the population and executed it perfectly.

Just as with all other advertising, the idea should be tight on the product, benefit and strategy. If you find yourself unable to explain the idea without mentioning the Hollywood star, track or a script gag, you probably don’t have an idea.

Snickers “You’re Not You When You’re Hungry”

The idea that you’re a little out of character when you’re are hungry is such a strong concept that it went on to become the brand platform for the next decade. Snickers added star quality, but they had an idea first, one that could have worked with almost any talent. But I am glad they got Betty White.

Marketers and advertisers need to appease a cast of hundreds: multiple CEOs get involved, the legal dept goes into overdrive, talent agents get demanding, the NFL has their say and so does the network. It’s hard to shepherd a good idea through this gantlet. It can be far easier to sell a spot based on star’s name, a track everyone knows or a joke, but it could also do the product or brand a disservice. It takes great leaders on the agency and client sides to decide on the idea before the executional glitter gets applied. But it will be worth it.

No stars, no music, no glitter. Just a perfect human truth that was executed to perfection.

The examples above didn’t simply ride the coattails of a star-studded cast, the year’s top song or even just a gag. They had ideas. And because of that, these spots and their brands will not be forgotten any time soon.

While Skittles’ “Taste the Rainbow” campaign is admittedly one that allows for audacious levels of flexibility, the ideas at the heart of both of these campaigns were so bold they garnered Super Bowl-levels of attention without Skittles ever buying official Super Bowl media. That’s a feat.

Max McKeon is a creative director at Colenso BBDO.