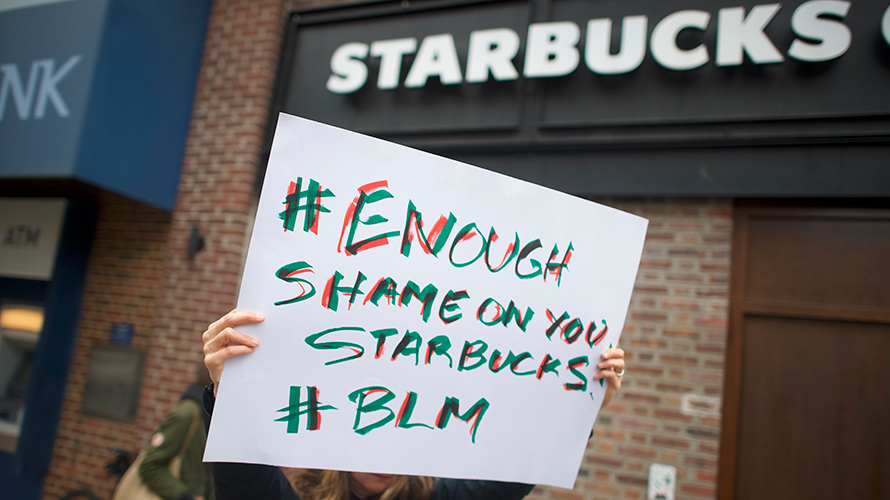 After the police were called on two black men waiting in a Starbucks, people took to protesting the brand. Getty Images

Social isn’t what it used to be. It’s no longer an organic community building tool; it’s a hyper-targeted and performance-driven paid media channel. However, its power to influence and impact businesses has never been stronger. It’s capable of creating breakout brands, huge valuations and inciting societal change. But like all technology, it’s a two-sided coin.

In recent times, we’ve seen the rise of brand boycott campaigns. They can have near immediate and disastrous consequences. In business, like life, some problems cannot be predicted. But steps can be taken to prevent them, minimize their impact and turn them into positives. Here are five ways to avoid and handle a brand snub.

Know who you are

It’s amazing how many brands lack a clear purpose, and that’s bad business. If you stand for everything, you stand for nothing—and in an era, where brand trust is a hard sell, lacking identity makes you vulnerable. That’s why brands like Patagonia can sue the president and produce provocative campaigns like Bears Ears and still grow the bottom line. They’re outspoken yet consistent, focused and decidedly not for everyone. Some level of negative sentiment is expected. Having purpose not only helps your business stand out, but it also allows you to be bold and see things like #BoycottPatagonia coming.

According to the Wantedness study, nearly 89 percent of Gen Z says they’re only loyal to brands that share their values. Today, brands are people, and people are brands. Customers expect them to have a conscience, be transparent, real, friendly, helpful and make them feel extraordinarily special.

Pepsi infamously messed up with its Kendall Jenner ad because it came across as super out of touch. Conversely, Taco Bell has had years of positive sales growth, fueled in part by their ability to innovate and be culturally relevant and customer-centric. A key part of their social strategy has been to “only post things that a fan would.” They keep it real and get results.

Don’t fight the internet—you’ll lose. Address the issue through social video and speak to customers, but tangible action is the only way out. Starbucks, one of the most revered brands of the last decade, is a good example.

If you stand for everything, you stand for nothing—and in an era, where brand trust is a hard sell, lacking identity makes you vulnerable.

After a video of two black men being arrested in a Philadelphia Starbucks went viral, #BoycottStarbucks spread like wildfire. In response, CEO Kevin Johnson apologized online and on TV, but then took it further. He visited the men and city officials. Most importantly, he announced that they would be shutting down their company-owned stores on the afternoon of May 29 to put all their employees through bias training. The incident didn’t negatively impact national sales, proof that quick and decisive operational change is the right move. Action, not words, changes hearts and minds.

Use the internet as your focus group

Don’t rely entirely on your legal and PR teams. Get feedback and insights from digital tools.

There are a few ways to do this. One is to turn to Facebook. It’s a powerful and affordable testing platform. Buy targeted and segmented media, run a handful of different messages and get a read on which solution resonates. Facebook even offers products to allow for controlled pre-testing. Second, you can utilize AI and machine learning. A service like Unanimous AI can use a mix of human and machine intelligence to help brands with concept testing and predictive analysis. If they can predict the Kentucky Derby, they can probably help you determine the right response. Lastly, use survey vendors such as Research Now to soft seed your message with customers. Time is of the essence when you’re being trolled, but it’s fast and easy to take a pulse in digital.

People don’t want brands to sit on the fence. For niche players, it’s a little bit easier. Take an irreverent one, like Cards Against Humanity did. Last fall, they purchased land near the Mexican border to prevent Trump from building a wall. A genius idea, in my opinion, but also expected from a company like them. On the other end, there’s Dick’s Sporting Goods, a mass retail company in a challenged category, who decided to ban assault weapons and raise the minimum age for a customer to buy a firearm after the Parkland shooting. That took guts, and I would argue is their best ad of all time, but it was not without consequences. While the majority of sentiment was positive, sales slumped following the announcement. But looking at it in the short-term is a mistake—the company expects to capture the lost revenue in other places. More importantly, they gave people a new, compelling and value-based reason to choose them.

There are unfortunately no knockout punches when it comes to handling boycott movements. But if I could sum it up in just a few words, make sure that your brand has a soul. Soul sells.