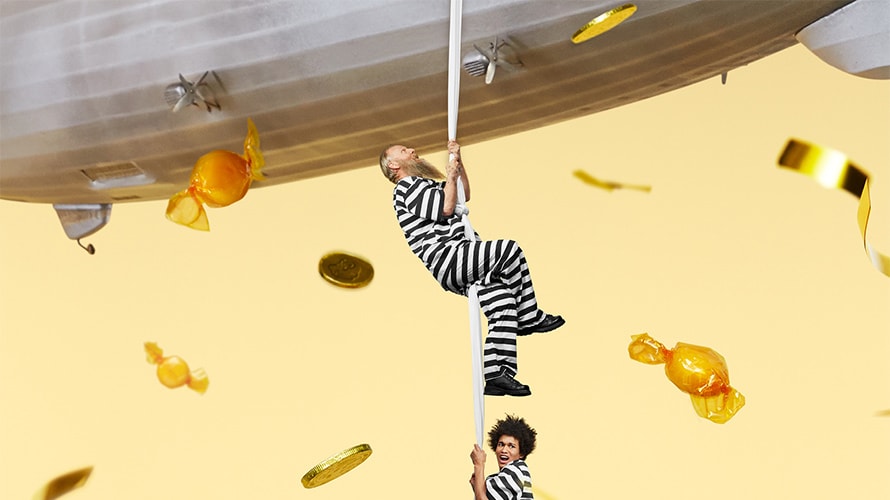 JailBlimp was just one of the names Mailchimp called attention to in their spot.

As the old adage says, “Laughter is the best medicine.” That’s why humor is a great ingredient to bring any marketing campaign to life. When done right, sprinkling a bit of comedy into your content makes it more engaging and shareable.

Here are six brands that have tapped into their inner John Mulaney and injected some humor into their marketing campaigns.

The beauty of humor is that it speaks to your audience, and there’s likely no other brand that accomplished that better than Dollar Shave Club, which has produced consistently hilarious viral videos and commercials.

The brand’s first YouTube video, “Our Blades Are F*cking Great,” which launched the brand, has now been viewed more than 26 million times since 2012. What makes it work is that it’s fun and edgy, and it doesn’t take itself too seriously. After all, the video features the brand’s CEO riding a forklift and dancing with a bear.

You may recall Oreo’s fancy footwork during the 2013 Super Bowl. It’s been lauded as one of the best examples of real-time marketing.

Power out? No problem. pic.twitter.com/dnQ7pOgC

When a power outage struck during the game’s third quarter, the cookie’s social media team jumped at the moment and tweeted an ad that read “Power out? No problem.” The tweet featured a dimly lit image with a lone Oreo and the caption, “You can still dunk in the dark.”

We’ve seen all sorts of bathroom-related humor, but Charmin has managed to use it to their advantage. And it works because, after all, they sell toilet paper.

Shout out to the person who, when I walked into the restroom, warned, "Stay out of the last one...it's not good." #EnjoyTheGo #smellsomethingsaysomething

The brand has successfully integrated humor into its voice on social media through a balance of toilet jokes and simple, relatable content because not everyone likes bathroom humor. They also often pair their jokes up with fun vignettes and polls to further engage their audience, which is, well, everyone. But, if there’s anything we can take away from Charmin’s use of humor, it’s the need to always tie it back to your brand, which they do quite well.

Who says comedians are the only ones that effectively use self-deprecating humor? Consider Mailchimp’s “Did you mean, Mailchimp?” campaign in 2017.

The email marketing platform collaborated with Droga5 to launch a campaign that capitalized on people’s mispronunciations of the brand’s name. The campaign centered around variations of the name, including KaleLimp, FailChips, JailBlimp and MailShrimp. But the best part is that each of them had their own fake products and websites that ultimately linked back to Mailchimp.

Triggering a strong emotion or catching your audience by surprise is all you need to engage them through humor. And that’s something that outdoor retailer Moosejaw has nailed by using social media to let its personality shine through.

Of all the days of the week, Monday is somehow my 8th favorite.

It’s one of many tongue-in-cheek posts that you’ll find on the brand’s social media platforms. It’s also the kind of thing that engages audiences by being witty and relatable. Because, let’s face it, everyone hates Mondays.

MoonPie may be known for its graham cracker cookie concoctions, but it’s also one of the sassiest brands on Twitter. Just like Charmin and Moosejaw, MoonPie is one of those brands that also incorporates humor into its voice. A brief scroll through the brand’s Twitter channel will expose you to an array of incredibly bizarre tweets and one-liners. But more importantly, it works. It’s funny and doesn’t cross any lines. It sounds more like you’re talking to a friend than a brand.

And that’s precisely why humor, when used properly, works for brands: It’s personal and engaging. When done right, consumers even forget that it’s marketing.

But when done wrong, it’s a PR nightmare. Remember that you don’t need to be funny all the time. You just need to be authentic. That’s enough to keep people hooked.

Samuel Dunsiger is a freelance writer for Adweek.