As Americans prepare to celebrate Memorial Day weekend, a Harris Poll released earlier this week contained a discouraging finding: Only a little more than half (55%) of us know what Memorial Day is actually about. Some people tend to confuse it with Veterans Day, which is on Nov. 11. (For the record, then: Veterans Day salutes all Americans who’ve served in the U.S. armed forces, but Memorial Day honors those who have died while doing so.)

This weekend, millions of people attending commemorative events are likely to see, on button holes and jacket lapels, a “papaver rhoeas”—or red poppy. And though few Americans may think of it this way, the poppy flower is very much a brand—not one designed to encourage shopping, but one that signifies, in manner both understated and unmistakable, the idea of sacrifice.

Just ask Eric Engquist. As the vp for military affinity and sponsorships for USAA, a financial-services firm for veterans, Engquist is always busy on Memorial Day, but this year there’s even more to do. USAA has created a Poppy Wall of Honor that it’s hauled to the National Mall in Washington, D.C. A Plexiglass-enclosed case that’s eight and a half feet tall and 133 feet long, the wall contains over 645,000 poppies—one for each of the men and women who’ve given their lives in service to the country since World War I. The installation opens today and will be on display though Sunday. 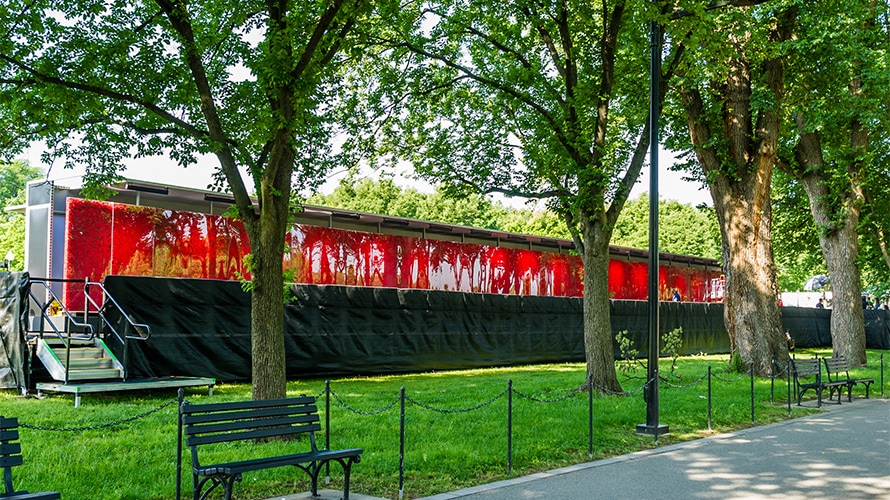 “In 2015, we created a poppy wall for internal use—only to educate our employees about the importance of Memorial Day,” Engquist said. “It was such a moving event that we created this opportunity to take it national.”

Not that the poppy wasn’t national already. Service organizations—notably the VFW and the American Legion—have distributed poppies for nearly a century now. (The flower of red silk is customarily distributed for free, though donations are encouraged to help fund programs that benefit veterans.) In 2017, Congress adopted House Resolution 309, which makes today National Poppy Day.

But the poppy tradition would never have begun without a Canadian soldier poet and two women who fought behind the lines.

The growth of the poppy

As a surgeon in the 1st Field Artillery Brigade, Lt. Col. John McCrae witnessed the worst of what WWI served up, especially during the Second Battle of Ypres, where the Germans used chlorine gas on the Canadians, and artillery shells turned the Belgian forests into fields of corpses and mud. When McCrae noticed how poppies had sprouted on the broken ground where his comrades had been buried, he was deeply moved. Picking up a pen, he wrote a poem titled “In Flanders Fields,” which begins: “In Flanders fields the poppies blow / Between the crosses, row on row.” 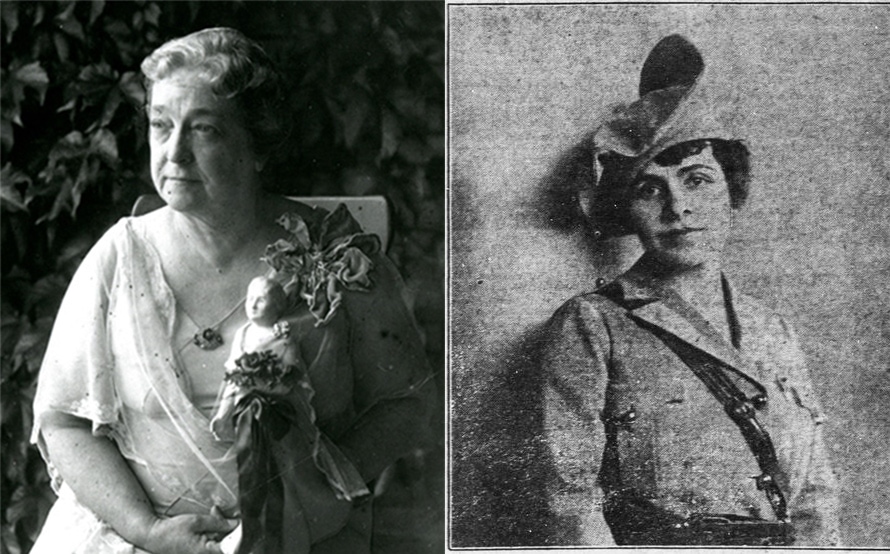 After the London magazine Punch printed it, the poem appeared in publications across the world, including Ladies’ Home Journal, which is where an American woman named Moina Belle Michael found it. A Georgia college professor, Michael encountered the poem in 1918 while attending a YMCA conference in New York. Stirred to action by the verses, she repaired to Wanamaker’s Department Store, where she bought a box of red silk poppies and began selling them to raise funds for veterans.

Michael’s efforts were slow going at first, but she eventually persuaded the American Legion to back the poppy effort, and the group adopted the flower as its symbol of remembrance at its national convention in 1920.

Speaking at that convention was a French war widow named Anna E. Guérin, an advocate for war orphans who had begun her own poppy drive on the other side of the Atlantic. It was Guérin who began the effort to place poppies on the graves of Allied soldiers who had fallen in France. And it was Guérin who, joining forces with Michael, prevailed on a second American service organization, the Veterans of Foreign Wars, to adopt the poppy as its official memorial flower in 1923. The VFW also created the “Buddy Poppy,” silk flowers made by the veterans themselves.

Take a flower, help a veteran

Today, 96 years later, “nothing has changed,” said VFW programs director Lynn W. Rolf III. “Across the country, I have six facilities—hospitalized veterans [who are] either going to be permanently hospitalized or going through a treatment program. We pay them per poppy to assemble them and it gives them a source of income.” Donations for those poppies then return to veterans in the form of services, “so it’s kind of multifaceted how we touch that veteran,” Rolf said. 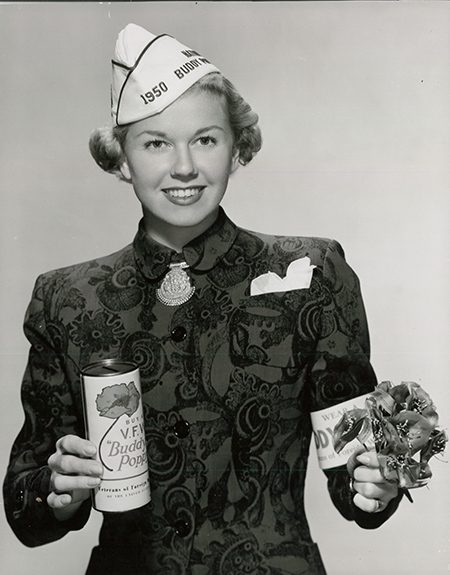 The VFW has long relied on its “Poppy Girls” in its distribution efforts, with local posts choosing an official Poppy Girl each year. In the years after World War II, ladies of the silver screen including Natalie Wood and Jane Wyman signed on as Poppy Girls. The most famous was probably Doris Day, who’d also logged time entertaining the troops overseas. “I did so many USO tours with Bob Hope and Les Brown,” Day told the VFW magazine in 2017 (she died earlier this month.) “[I] was proud to represent our veterans through the Buddy Poppy program.”

The American Legion, too, continues the effort it started 99 years ago. Today the effort is led by the American Legion Auxiliary, the largest women’s patriotic organization, which distributes poppies at public events around the country. The group also runs an online Poppy Shop that sells everything from poppy bracelets to poppy decals to a poppy scarf.

Poppies of the empire

Though Americans might consider the memorial poppy to be their own, the fact is that the flower’s symbolism spans international borders—especially in the United Kingdom, which together with its commonwealth states lost 888,246 men in WWI. In fact, that staggering figure was what inspired artist Paul Cummins to create history’s most sweeping and monumental display of poppies, the field of ceramic flowers installed on the grounds of the Tower of London in 2014. 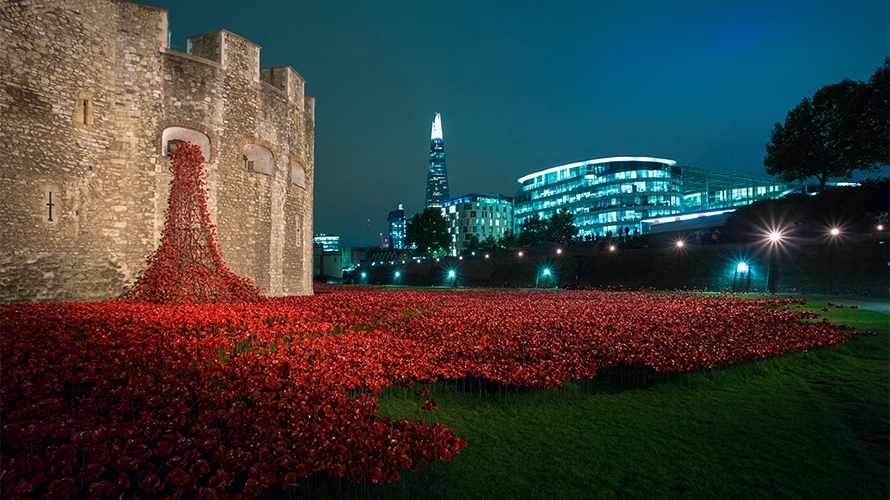 Titled “Blood-Swept Lands and Seas of Red”—a reference to a poem that Cummins found at his local library—the work marked the 100th anniversary of the start of World War I. (America did not enter the conflict until 1917 and, consequently, its loss of life—116,516—was less than Great Britain’s.) The installation drew 5 million visitors.

Initially, Cummins told Adweek, he had considered using roses for his work. “In Victorian times a red rose symbolized sacrifice and memorial and of course we look at poppies as a symbol of remembrance,” he said. “I settled on the poppy due to the close link with remembrance and memory.”

Visitors to Cummins’ installation were deeply affected both by the spectacle and the symbolism behind it—so much so that Britons bought every single poppy in the field, raising £9 million (over $11 million.) For the artist, however, the poppy’s symbolism is dual. “The poignancy of this comes from the fact that poppies will only grow in nutrient rich soil and as we all know, grew in the fields where soldiers fell during the First and Second World War,” he said. “Their blood red color sprang through the fields of the fallen and to me represent the loss of the lives of the soldiers. I have always thought that poppies were a symbol of death but also a symbol of hope rising through afterwards, and I think that’s why so many people resonate with the flower.”

Asked why he thinks the poppy’s symbolism has endured so long in the United States, the VFW’s Rolf explained that it’s a tradition that flows through families, even though the number of active military personnel is far lower than it was in decades past. “In WWI, we had more people affected by conflict, [and] it even grew to WWII,” Rolf said, but “the families and the amount of us going out there with these poppies just carry over generations. I can’t tell you how many times I’ve had a 90-year-old lady or a veteran [say], ‘I can’t wait to give this to my granddaughter and grandson and talk to them about what this meant to me as a kid…’”

The poppy, he said, “is an institution of its own.”