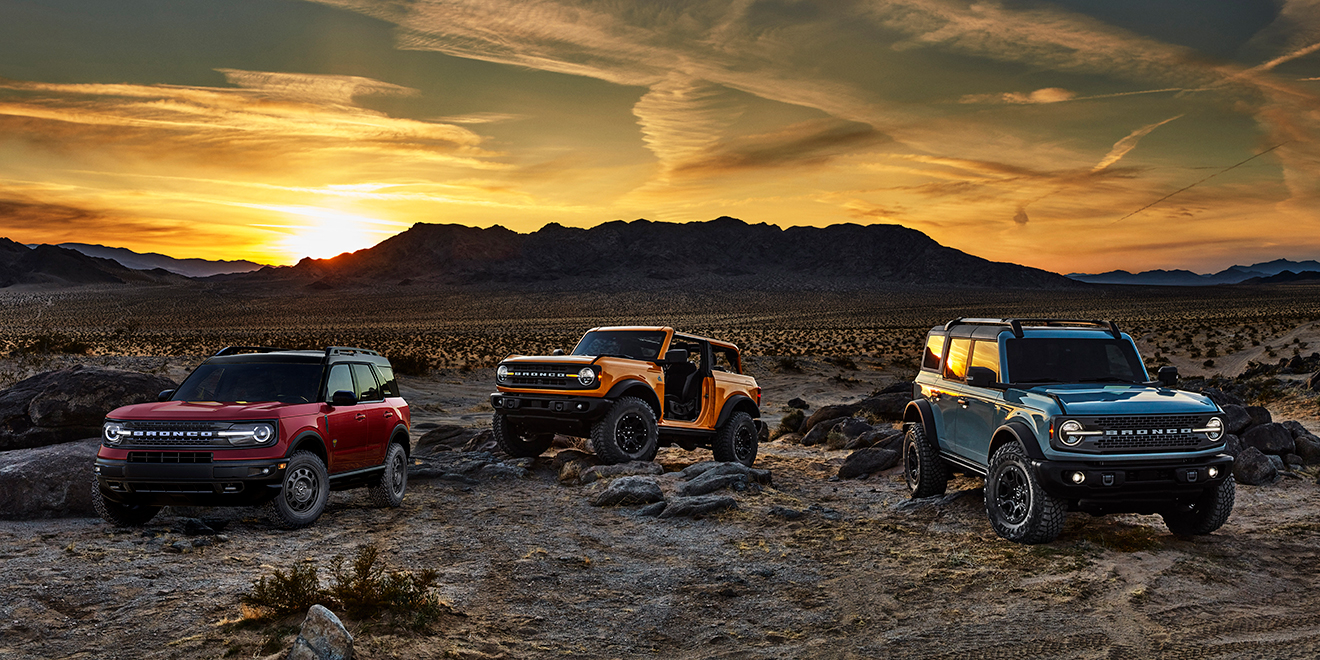 The Bronco may be best remembered as the vehicle from perhaps the most infamous car chase in history: when O.J. Simpson sat in the back of his friend Al Cowlings’ white Bronco pursued by the LAPD down the Santa Ana Freeway in 1994. But now, Ford is hoping to thread the needle, marketing the vehicle to the public while appeasing diehard fans who have continued to follow it since it was taken off the market almost 25 years ago.

Most importantly, Ford is hoping to take away market share from Jeep and its coveted off-road offerings. So far, Ford has made clear this isn’t a nostalgia play or a move toward exclusivity like the brand’s limited-production GT500.

“Our target audience is not someone who wants a retro-restored Bronco—it’s someone who’s looking for innovation,” said Matt VanDyke, director of U.S. marketing at Ford. “There’s a spirit of authenticity that we had to be careful we designed into it, but it has to be forward-thinking. We want to reach a mass audience with this.”

In a partnership with Disney, the Bronco’s reveal took place across ABC, ESPN and National Geographic, with each network running a separate 3-minute ad during the first commercial break after 8 p.m. on Monday.

Although not exactly a surprise to anyone following the industry, it marks the official announcement of three new vehicles under the Bronco brand: two-door and four-door models, and the Bronco Sport. The Bronco’s tagline is “Built Wild.”

Although Ford may never admit it, the company’s newest brand does have one distinct advantage. Broadly speaking, any auto buyer born before 1985 can at least picture a Ford Bronco thanks to the Simpson chase. It’s widely estimated that nearly 95 million people watched the former NFL running back and Hall of Famer’s low-speed chase after being accused of killing ex-wife Nicole Brown Simpson.

“Ford is very happy that everybody already has some idea of what a Ford Bronco is,” said Alexander Edwards, president of the auto consulting firm Strategic Vision. “It was a car chase. A very serious tragedy happened, but that’s not what the Bronco was connected to.”

So far, the Ford brand has stumbled in avoiding Simpson, awkwardly (and harmlessly) announcing the reveal of the Bronco on Simpson’s birthday, before moving it to Monday. Although the brand claims the chase didn’t kill the vehicle—sales had been dwindling, and Ford instead chose to push its new, four-door Explorer SUV—the vehicle was suspiciously discontinued two years after the incident.

“Nostalgia for the Bronco is good, but it’s also nuanced,” said Jessica Caldwell, executive director of insights at Edmunds.com. “You can’t necessarily ignore the elephant in the room.”

Oh, but they’ll try. Instead of letting O.J. eat up the headlines, Ford, in its marketing and prerelease communications, dove into the archives, releasing a brand manifesto for the Bronco. In a teaser video released on Instagram, Ford spokesperson Bryan Cranston says the Bronco is a vehicle that “can look adventure in the eye and give it a firm handshake,” with shots of wild horses and clay red mountains. It’s a shift Ford hopes will redirect attention toward the Bronco’s glory years of the late ’60s and ’70s and the future of the brand—anything but that one incident in the ’90s.

Like everything else in 2020, Ford’s announcement didn’t quite go as planned. The brand was going to reveal the Bronco at the North American Auto Show in Detroit, but the Covid-19 pandemic derailed that.

Monday’s launch is the first time Ford has ever announced a new product during a broadcast. But, it isn’t Ford’s first launch ruined by the pandemic. At the end of June, Ford taped a digital special for the reveal of its new F-150. Instead of looking for a broadcast partner, the release took place on Ford’s owned social channels with the support of paid social advertising.

VanDyke declined to share audience numbers but said the digital release met the brand’s expectations. On YouTube alone, it racked up 485,000 views. The Bronco’s launch will be on YouTube as well and available on Hulu on Tuesday.

“We just don’t want all these to be the same,” VanDyke said. “For this, we went out and pursued a partner that had a platform with scale.” 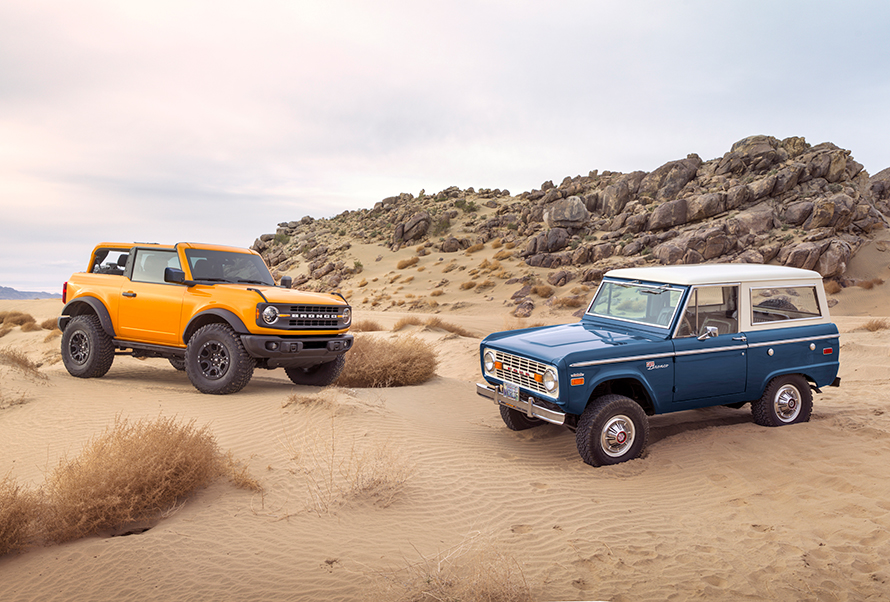 It isn’t yet clear if opting for media buys is cheaper than hitting the now nonexistent convention circuit—”auto shows aren’t a cheap date,” VanDyke joked—but experiential marketing will be vital for Ford as it attempts to establish a sense of community around the Bronco.

The brand is planning on hosting off-roading programs, teaching Bronco owners how to find accessible trails, remove their detachable doors and safely tour any terrain.

“If you look at the off-road vehicle space in the U.S., it’s a much less crowded space,” VanDyke said. “It’s attracting millennials. It’s attracting females. It’s attracting growth audiences. We’re looking at this as an outdoor lifestyle vehicle brand and invite people into it.”

Ford carves its own customer base

Automakers are trying to develop new niches within the SUV space “to carve their own customer base,” Caldwell said. “It’s a joke right now if you think about most SUVs going off-road. It’s reminiscent of when an SUV was an SUV.”

But, will that be enough to lure people away from Jeep? It might not have to. Even though the Bronco is a Wrangler competitor—Jeep sold more than 228,000 Wranglers in 2019—Ford doesn’t have to convert Wrangler fans, just potential Wrangler fans.

Although VanDyke said the Bronco will be available to anyone who wants one, the vehicle should still create a halo effect for the brand.

“If [a consumer] put Ford on a shelf, this has the ability to create attention and interest,” Edwards said. “The launch of the Bronco should sell more F-150s and get people to think about their other products.”

Edwards added that Ford would be “ecstatic” if 10% of Bronco sales came from previous Jeep owners and another 10% came from first-time car buyers. Currently, the Bronco is expected to sell for roughly $30,000, and prospective buyers can reserve one for as little as $100.

Those sales will be important as Ford lost an estimated $2 billion during the first quarter of 2020, and the second quarter might be just as grim. For reference, Jeep’s parent company, Fiat Chrysler, lost $1.8 billion.

“If anyone’s going to do this, Ford has an opportunity,” Edwards said. “There are people who are interested in adventure. They might never go in the mud, but if they had a vehicle that could do that, it might be interesting to them. I think Ford is going to sell an acceptable number of these vehicles.”

This ad aired during CMA Best of Fest on ABC.
@RyanBarwick ryan.barwick@adweek.com Ryan is a brand reporter covering travel, mobility and sports marketing.