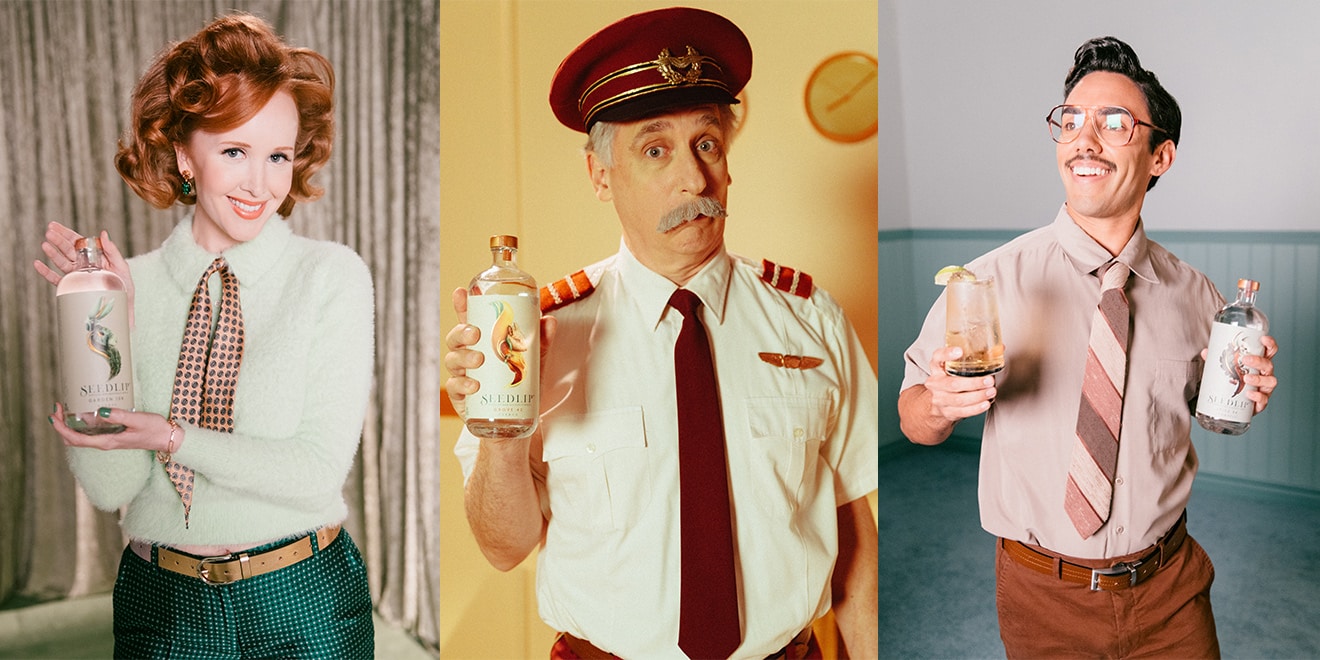 Seedlip's digital campaign targets those who don't drink, do drink and sometimes drink.

An estimated one in five Americans abstain from drinking alcohol during Dry January, but the booze-free lifestyle trend isn’t just limited to the first month of the year.

According to market research firm Nielsen, 66% of U.S. millennials and 47% of all American consumers 21 and older said they reduced their alcohol consumption in 2019, for health-related reasons and to save money. As the sober-curious lifestyle trend is expected to continue growing in 2020, non-alcoholic or “zero-proof” spirit brands are catching on and providing new options for consumers who don’t want to sacrifice a social nightlife.

Seedlip, a brand of distilled alcohol-free spirits, has spearheaded the trend of zero-proof craft cocktails since Ben Branson founded the U.K.-based company in 2015. The brand’s three botanical variants—Spice 94, Garden 108 and Grove 42—are now sold in more than 25 countries around the globe at 7,500 bars, hotels, retailers and restaurants, including around 300 with Michelin stars. Seedlip has seen 124% growth year-over-year and volume growth of more than 270% in 2019, according to the brand.

Diageo acquired a majority shareholding in Seedlip in August, following the brand’s minority investment from the Diageo-backed accelerator program Distill Ventures in 2016. According to a 2019 study Distill Ventures conducted in partnership with Seedlip in the London, Los Angeles and New York markets, 58% of all consumers surveyed were drinking more no- and low-ABV drinks than the previous year; 83% of bar managers in Los Angeles think non-alcoholic cocktails are part of a larger trend; and 55% of venues in the U.K. are either dedicating sections of their menus to alcoholic-free drinks or creating separate menus for them.

To kick off the new decade, Seedlip has launched its first major digital advertising campaign in the U.S. to continue raising consumer awareness of the brand and demonstrate that non-alcoholic booze can be for every type of drinker. Seedlip worked with California-based creative agency Rosewood Creative to create “The Seedlip Social: A Drink for Every Drinker,” which includes three quirky, colorful digital ads that depict three consumers with distinct personality traits who find a common connection in their preference for mocktails.

While Seedlip has been available to purchase in the U.S. for more than a year, Jake Annear, the brand’s U.S. head of digital and ecommerce, said the brand timed its U.S. campaign to Dry January to drive awareness during a month when more American consumers are committing to sober and healthier lifestyles, or evaluating their relationship with alcohol.

“We felt that a campaign that champions all types of drinkers would resonate with consumers, regardless of where they’re at in their acceptance of non-alcoholic cocktails,” Annear said. “Primarily, we want to get people to understand what Seedlip is as a brand and product. We believe our product is one that touts inclusivity and shows people they can have many options during a drinking occasion.”

The ads depict the “can’t drinker,” someone whose circumstances prevent them from consuming alcohol, as Lloyd the pilot, who enjoys a Seedlip and ginger ale. For the “balanced drinker,” who enjoys alcohol in moderation, IT manager and social butterfly Miguel sometimes opts for Seedlip to avoid drinking alcohol every night of the week. And Pearl represents the “doesn’t drinker,” those who choose not to consume alcohol for a variety of reasons; in this case, she doesn’t enjoy the taste of alcohol but still wants a refined cocktail that suits her particular palate.

Seedlip launched the campaign across its social platforms on Jan. 3, and has partnered with Vox Media to roll out the campaign through programmatic, video, custom content and podcast audio reads beginning later this month through the end of March. As part of the Vox Media partnership, Eater will release dry bar-hopping maps of New York and Los Angeles that illustrate spots where Seedlip cocktails are on the menu, such as Eleven Madison Park in New York and Upstairs Bar at the Ace Hotel in Los Angeles.

“The hope is that people’s first experience with the brand will involve having a well-crafted cocktail, so they can understand the value and flavor we’re trying to put forth,” Annear said. As another physical extension of the campaign, Seedlip partnered with Naked Retail Group to launch a temporary pop-up bar in the accessory retailer’s New York store, which will serve cocktails and sell bottles from Jan. 8-March 29.

Seedlip also released a new cocktail book today, and is the presenting sponsor of this year’s SXSW Wellness Expo, where Branson will be a panelist. Annear said the brand plans to push the campaign heavily in the first quarter of 2020, with the possibility of introducing new “Seedlip Social” characters later in the year.

While Seedlip is the most high-profile spirit brand marketing to the sober-curious consumer, a few other DTC non-alcoholic spirit brands, which have all launched in the past two years, are starting to engage with consumers through new product launches and expansions to more grocery stores and bars in the U.S.

Ritual Zero Proof, a Chicago-based distilled spirit alternative, on Monday announced a minority investment from Diageo through Distill Ventures. Launched in fall 2019, the brand has two products, a gin alternative and whiskey alternative, distilled with botanicals to evoke the smell and taste of liquor.

Author Marcus Sakey, who co-founded Ritual with his wife GG and natural foods expert David Crooch, said the idea for the brand came about from experimenting with booze-free cocktail-making in his kitchen while he took a conscious break from alcohol. Sakey said that a driving force behind the sober-curious trend involves consumers who want to drink more consciously, but not give up alcohol entirely. 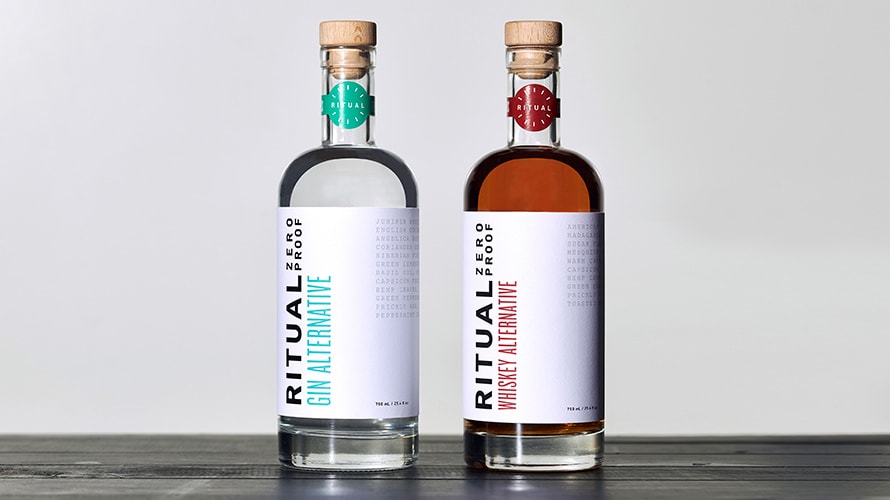 “The way we see it, [Ritual] is not anti-alcohol at all. It’s just adding another tool to your cocktail kit,” Sakey said. “It’s the perfect Tuesday night drink. And it’s the bottle you can reach for if you’re pregnant or training for a marathon.”

While Ritual is currently sold on the brand’s website, Amazon, and at retailers and bars in the Chicago area, Sakey said the Distill Ventures investment will provide a means for an upcoming ad and marketing push; his goal is to see Ritual bottles behind bars and in major grocery store chains in all 50 states and Puerto Rico by the end of 2020. Ritual will also launch its third product, a tequila alternative, in April.

Alcohol-free bars are also starting to gain momentum in London and New York. Redemption Bar, which has three locations in the U.K., specializes in cocktails with plant-based spirits. Getaway, an alcohol-free bar that opened in Greenpoint, Brooklyn in 2019, serves cocktails made with Seedlip and Three Spirit, a U.K.-based brand of stylish bottled “wellness” spirits that cater to semi-sober consumers. Three Spirit was co-founded in 2018 by Tatiana Mercer, a beverage industry professional who is also the co-founder of BarChick, an online platform for finding bars around the world.

Mercer said sober-curious consumers want a sophisticated drink alternative that can “help you go out, socialize and have a good time, which is important for our mental health.” The brand offers three spirits that can be consumed in mixed drinks or on the rocks, made with plants and herbal ingredients specifically tailored to boost one’s mood (the Social Elixir), energize through natural caffeine (Livener) and help people unwind (Nightcap).

Laura Taylor, a former software executive who stopped drinking alcohol five years ago, said her desire to still feel included in social functions and Seedlip’s momentum in Europe both inspired her to launch bottled mocktail brand Mingle Mocktails in 2018. The beverages are currently sold in Northeast and Mid-Atlantic chain grocery stores like Balducci’s, Bed Bath & Beyond and Wegmans, with plans to launch in Whole Foods this spring.

“What’s driving the sober-curious trend, in my mind, is that younger people are drinking less and want healthier alternatives across the board. People who are aging are also drinking less or quitting [due to health reasons],” Taylor said. “There’s an acknowledgement that you can be just as fun and social without alcohol, and live a very full life.”