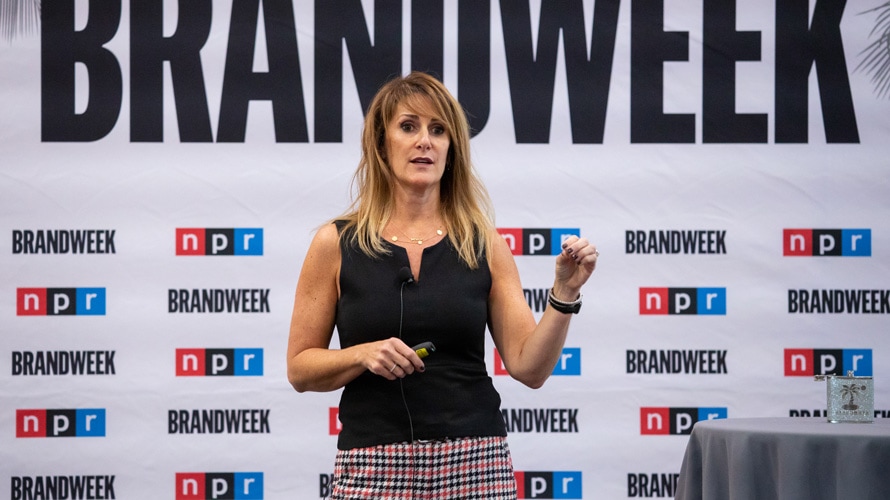 The building blocks of a purpose-driven brand include transparency and authenticity, according to NPR's Meg Goldthwaite. Sean T. Smith for Adweek

PALM SPRINGS, Calif.—National Public Radio exists to entertain its listeners, but also to dive deeper into the news of the day, creating an informed public and showcasing its uncompromising journalists.

So what happens when NPR itself becomes a headline, with a high-level executive accused of sexual harassment and misconduct?

The answer, from NPR’s chief marketing officer Meg Goldthwaite, was to allow its own reporters to cover the internal controversy in painstaking detail. That included interviewing CEO Jarl Mohn on All Things Considered about the allegations against news chief Michael Oreskes, and covering management’s response (or lack thereof) to staffers’ complaints about workplace culture.

“We had to investigate ourselves with the same conviction that we would anyone else,” Goldthwaite said at Adweek’s annual Brandweek summit. “That was absolutely consistent with our brand purpose, which means you have to stick to it on good days and bad days. You can’t peace out on your brand purpose because it gets messy.”

“We were facing a crisis,” Goldthwaite said. “I had to tell my CEO to subject himself to the dogged questions of a reporter, which was not a fun experience for him.”

It was essential, though, if NPR was to maintain its credibility, she said, and the same applies to any company. Marketers must live up to their brand purpose or face the consequences from disillusioned consumers, 48% of whom will complain if they see a disconnect between words and deeds. Meanwhile, 42% will walk away from a brand in the face of an ideological failure, and 21% will never return, Goldthwaite said.

On the other hand, buyers and fans will reward purpose-driven brands, since 78% of Americans believe that companies need to do more than just make money, she said. Two-thirds of consumers are willing to switch to a product from a purpose-led business, and 68% are prepared to sing the praises and publicly share information about those brands.

Walking the walk will help “create a consumer army as passionate about affirming your goal as you are,” Goldthwaite said.

The building blocks of a purpose-driven brand include transparency and authenticity, she said, along with “knowing what you stand for, what you’re fighting for, and what you’re willing to give up in that fight.”

As a nonprofit organization that relies on a mix of public and private funding, NPR doesn’t have the same bottom-line Wall Street pressure as many companies, “but we need to be sustainable,” she said. “In an on-demand world, we need to make certain you demand us.”

Here are Goldthwaite’s four top tips on “the care and feeding” of purpose-driven brands:

1. Define your purpose. “Why does your brand matter? What would audiences lose if you weren’t there?”

3. Live your purpose. “You have to look beyond your own interests to serve the greater good.”

4. Share your purpose. “The fun part is telling everybody about it, but you’ve got to be authentic. If you’re not telling the truth, you could die the death of a billion tweets. Don’t declare it unless you’re ready to do it.”