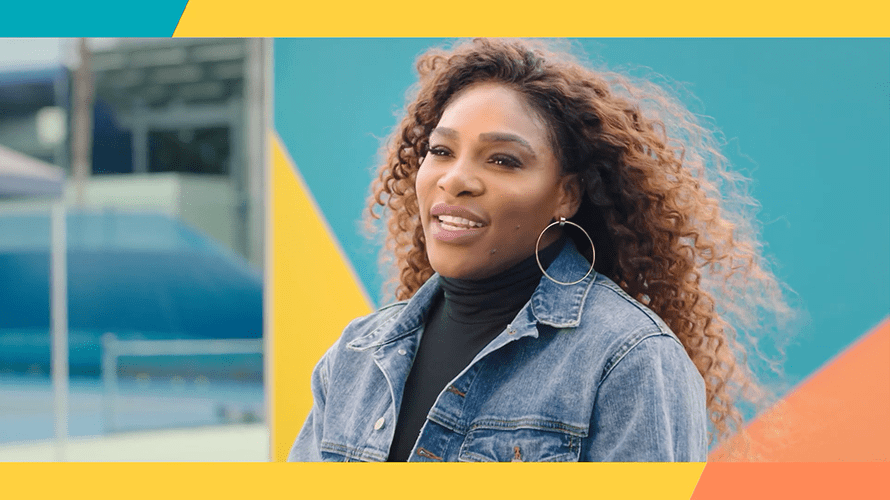 Serena Williams will star in Bumble's first Super Bowl ad, which will debut during the first half of the game. Bumble

After recently unveiling a campaign with newest global advisor Serena Williams called “The Ball Is in Her Court,” Bumble has revealed that the first spot in the campaign will debut during the first half of the Super Bowl, which will mark the five-year-old company’s first appearance in the Big Game.

The brand would not confirm the length of the spot or in what quarter it will air.

The ad will showcase the rise of Williams, not just as a professional tennis star but as an entrepreneur, role model, wife and mother. The spot was created by a predominantly female team of creatives at Bumble’s lead agency, FlyteVu, and WPP’s VMLY&R (formed through the recent merger of VML and Y&R). It was directed by A.V. Rockwell, a screenwriter and director from Queens, New York, whose work addresses such issues as race and systematic oppression and has garnered awards including a Clio for The Gospel, a short film she directed for singer/songwriter Alicia Keys.

A teaser spot (below) has Williams discussing why now is the time for women to take control of their own stories and also includes behind-the-scenes footage of the female creatives who brought the ad to life.

“We’re living in a world and society where people are starting to see differently and starting to understand that we are just as strong and just as smart and just as savvy and just as businesslike as any other male in this world,” Williams says in the ad.

Bumble, a social networking app launched in 2014 that has women make the first move, was founded on the basis of relationships and feminism. That’s why Bumble chief brand officer Alexandra Williamson told Adweek it was critical for her team to not just focus on one single aspect of Williams’ life, like her tennis career, but everything she does as an athlete, entrepreneur, mother, friend and wife.

“She has built the life she wants to live; a life that transcends the court,” Williamson said. “People will see a different side to Serena when this ad goes live, and I would attribute that to an all-female team working on it.”

That’s all the more critical to showcase on a “male-dominated” platform such as the Super Bowl, she added.

It’s rare for any ad to be directed by a woman and created by an all-female team and even rarer for that ad to appear in the Super Bowl. Only four female directors (all of whom were white) were hired for the Super Bowl last year, compared to 42 male directors, according to Free the Bid, the nonprofit that works to increase the number of female directors in advertising. Free the Bid founder Alma Har’el was one of those four, directing last year’s beautiful 60-second Super Bowl spot, “The Wonder of Us,” for Coca-Cola.

“There are so many women who are willing and eager [to be involved in the Super Bowl], and every woman involved [in Bumble’s spot] had so much passion,” Williamson said, questioning why then there is still such a wide gender gap in advertising.

VMLY&R global chief creative officer Debbi Vandeven told Adweek that the almost entirely female creative team, spread across various parts of the country, was pulled together rather quickly to work on the Bumble spot, communicating with each other from “early mornings to late nights” over the holidays to ensure the ad would be ready for the Big Game on Feb. 3.

“I have never seen a team as dedicated as this one,” Vandeven said, adding that kids could be heard in the background on any given call they conducted over the holiday break. That’s part of what distinguished her experience working with a predominantly female team versus one with mostly men. “They’re not balancing as much,” she explained of working men. “A lot are supported behind the scene while women have to manage multitasking.”

This was something that also connected the creative team to Williams, who had daughter 1-year-old Alexis Olympia Ohanian Jr. on set with her while filming the ad.

When Bumble first announced its partnership with Williams earlier this month, the brand did not confirm that it would actually be airing a spot in the Big Game. The company’s release only noted that “the partnership will go live during one of the most watched cultural moments worldwide, Super Bowl LIII.”

Williamson said Williams was the perfect spokeswoman to take the Bumble brand to the Super Bowl for the first time, as she’s someone who has “continually made the first moves” in her life and career. And while Bumble may have only just inked a deal with the tennis star, Bumble founder and CEO Whitney Wolfe Herd has been eyeing Williams to represent her brand since its beginning.

In October 2014, Wolfe Herd posted a picture of a tennis racket and pink ball with the Bumble logo on it to the brand’s Instagram account with the caption: “The ball is always in her court on Bumble.” That post was always intended to draw the attention of Williams, according to Williamson.

“It can be very intimidating going into the Super Bowl as the new kid in school, but being surrounded by so many amazing women gives us all the confidence in the world,” added Laura Hutfless, partner at FlyteVu.