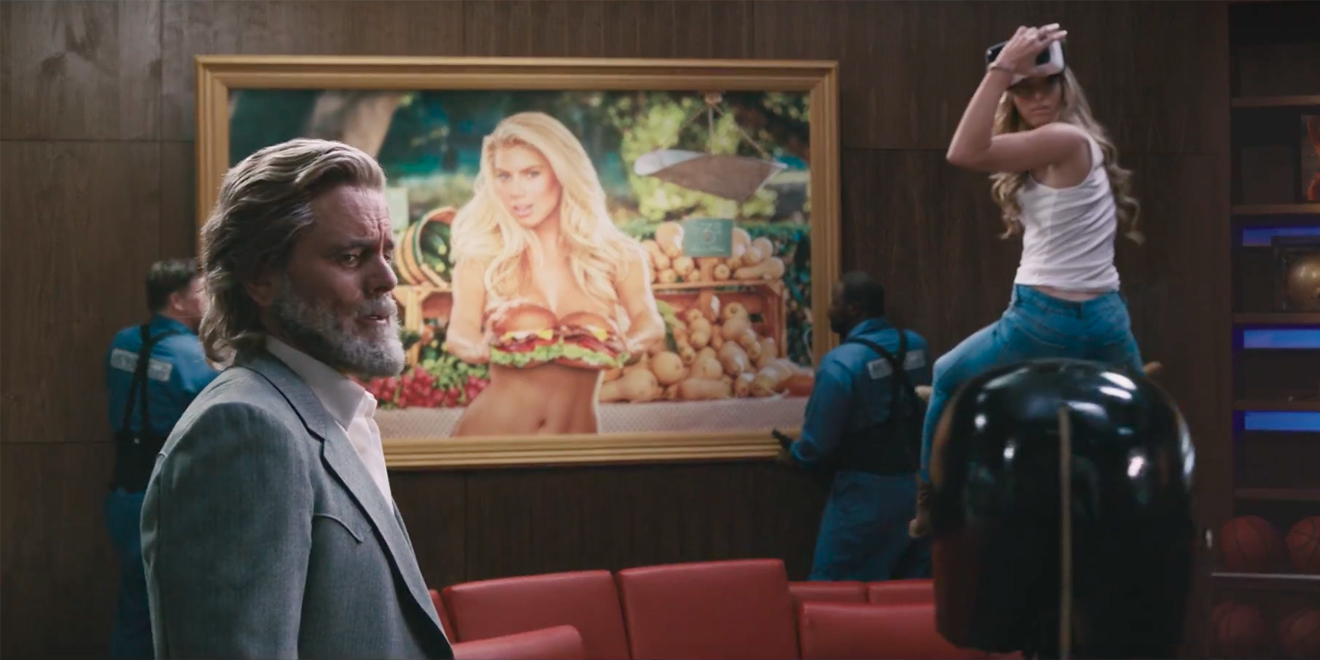 Fictional founder Carl Hardee Sr. is done selling sex and ready to take the brand in a new direction. Carl's Jr. via YouTube

Folksy and charming, Carl Hardee Sr. is a no-nonsense kind of guy who doesn’t care much for provocative ads featuring bikini-clad women. He aims to put the focus on “food, not boobs,” with a new marketing strategy.

That’s quite a departure for the Carl’s Jr and Hardees burger chains, where millennial playboy Carl Hardee Jr. has been running the place like a baller, using exposed skin and double entendres to grab consumers’ attention. Looks like the party’s over, dude.

This is the fictional scenario, with a cheeky nod to real life, for a new campaign launching today and kicking off a major brand overhaul for the fast-food restaurants. It also introduces the first-ever spokesman for the CKE-owned Carl’s Jr and Hardees sister chains—the logically named Carl Hardee Sr. (an amalgam of actual founders Carl Karcher and Wilbur Hardee).

Played by actor-musician Charles Esten from the soapy series Nashville, the weathered and bearded character takes control of the company from his wayward son in the opening moments of the new spot. Flanked by movers who quickly get to work tearing down the displays of branded hedonism, Senior quickly gets the attention of his out-of-control progeny and his long-suffering employees.

It’s unclear where Papa Hardee has been all this time—those risqué commercials go back at least 15 years—but it’s obvious that stuff just got real. (The mechanical bull in the corner office can stay, though).

Ad agency 72andSunny has created the Hardee character with the goal of changing the conversation around the burger chains (known as Hardees in the South and Carl’s Jr. in most other markets), which broke ground with industry firsts like made-from-scratch biscuits and grass-fed beef. (There is a meta element, of course, in seeing 72andSunny tear down its old advertising with the new.)

They’re also rolling out a new tagline: “Pioneers of the great American burger.”

“They’ve never really gotten credit for their quality, and we want that message to land with consumers,” said Jason Norcross, executive creative director and partner at 72andSunny. “We want to reclaim their bona fides.”

“It was time to evolve. Some of the product attributes got lost because people were too busy ogling girls.”
Jason Norcross, 72andSunny

But there’s no point in denying the controversial and much-maligned approach of the past, he said. Instead, the new campaign embraces previous ad stars like Charlotte McKinney, Genevieve Morton, Emily Sears and Elena Belle in a winking way (they’ll appear only as cardboard cutouts and artwork).

“It was time to evolve,” Norcross said of the previous “made-you-look” tactics. “Some of the product attributes got lost because people were too busy ogling girls.”

The target audience is the same—young, hungry guys—but Norcross said the brand wants to be considered as a lower-priced alternative to competitors like Shake Shack, The Habit and others in the currently hot better-burger category. The campaign’s ongoing emphasis will be on ingredients and sourcing, two hot topics in the broader food world.

The character will likely be integrated into programming or branded bits on networks like Comedy Central via media partnerships. (His girl-crazy son, played by comedian Drew Tarver, may have a recurring role as well). 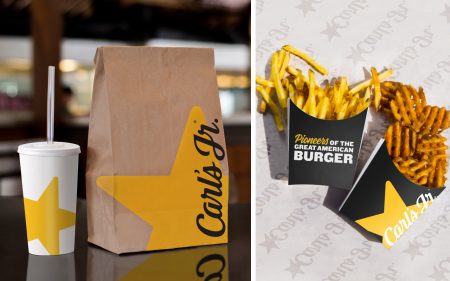 The chain has new packaging, too.

72andSunny execs also revamped the chains’ logo, uniforms, menus and packaging – streamlining the look and stripping out the bright red cartoonish touches—for what Norcross called “a big brand reboot that we hope becomes a brand transformation.”

On the get-it-done scale, Carl Hardee Sr. is obviously an overachiever. As seen in the new 3-minute mini-movie, it doesn’t take him long to effect some radical change at his old stomping ground, lining the walls with hero shots of burgers instead of eye candy and revoking his son’s parking privileges.

He also gives viewers a history lesson about the brand, founded in 1956, showing in flashback how the chain popularized charbroiled meat and the drive-thru window. (Carl Jr. shows up in the time-shifted snippets when he’s cute and young, pre-obnoxious bro phase).

Esten, who also has a comedy and improv background, plays Hardee Sr. with a mix of disciplinarian dad and straight-shooting Southern gentleman. (And he drives a vintage Corvette, so he’s old-school badass).

Hardee Sr. will be the face of the brand for the rest of the year (at least), touting, among other things, new burgers with unique flavor combinations. 72andSunny execs also pulled in trap-music artist Oiki to reveal the brand’s new tagline in short films and announce all-natural chicken and other product launches. Watch the first, called “Pioneer,” below.