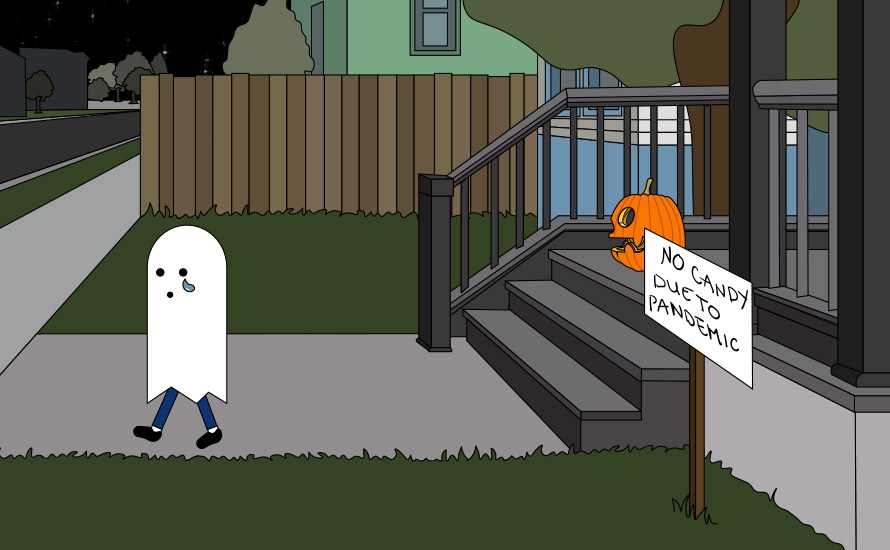 Halloween is nearly three months away, but concern that the coronavirus outbreak could hurt candy sales due to fewer festivities and trick-or-treaters is already here.

“By all indications, we will not be clear of the pandemic in any way before the leaves turn and little ghouls come prowling in search of candy,” said Dipanjan Chatterjee, vp and principal analyst at Forrester Research.

In anticipation of less demand, The Hershey Company has shifted production away from Halloween-themed items to protect itself “should Halloween sales be a little bit lighter,” said CEO Michele Buck during a conference call with analysts in late July.

With Covid-19 still a threat, few people appear willing to walk door-to-door collecting candy from neighbors. Indeed, a mere 27% of U.S. adults plan to take their kids trick-or-treating this Halloween, according to a mid-July Harris Poll survey involving nearly 2,000 participants.

“While research indicates trick-or-treating participation will likely be below prior year levels due to Covid-19 concerns, the expectation of this holiday tradition has been consistently improving over the past several weeks,” said Buck during a prerecorded earnings call last month.

Buck noted that trick-or-treating represents about half of Hershey’s Halloween candy sales, which shoppers generally buy in the final two weeks of October. The other half, which people purchase earlier in the season, is either shared with family and friends or intended for self-consumption.

Even if trick-or-treating drops off this year, John Baumgartner, a senior equity analyst at Wells Fargo, believes there are a couple of options to limit the damage to Halloween sales.

“It doesn’t have to be the disaster that some investors have feared,” he said.

First, companies such as Hershey’s can ramp up advertising aimed at people perhaps looking to treat themselves or put out a couple extra candy bowls in the living room this fall. Stress levels during the pandemic, after all, have spiked.

Another opportunity is to increase marketing focused on everyday chocolate products, as opposed to Halloween-specific ones. This, Baumgartner explained, could include extending summer campaigns, such as Hershey’s focus on s’mores.

Ultimately, the number of people who venture out to collect candy on or around Oct. 31 will depend on how safe they feel in the days prior, which will “obviously be an unknown until it isn’t,” said Baumgartner.

The importance of holidays for candy

Halloween is a crucial time for the industry. In the eight-week period leading up to Halloween 2019, total candy sales came to $4.6 billion, according to the National Confectioners Association, whose members include Hershey’s, Ferrara and Mars Wrigley. That dollar amount was larger than the weeks leading up to Valentine’s Day ($3.5 billion), Easter ($3.5 billion) and the winter holidays ($4.5 billion). More than 60% of the industry’s sales occur during these four seasons.

Ferrara, maker of Trolli and Nerds candies, and Mars Wrigley, maker of Snickers and M&M’s, both declined a request for comment.

“While brands can optimize around the edges by having more multipurpose packaging and messaging to manage supply chains and marketing, there is no sugar-coating the anticipated revenue hit,” Chatterjee said.

Instead, he advises companies to demonstrate their creativity and imagination by designing programs and initiatives that capture the joy of Halloween, even if that means forgoing the exchange of sweets. “These brands won’t have any short-term sales to show for it in October,” said Chatterjee, “but their brand equity will thank them for it for a long time.”

Erin Lash, a director at investment research firm Morningstar, said Hershey’s isn’t likely to drop the ball this Halloween due to its leading brands and ability to adapt.

“This resiliency played out during the last economic recession, a period in which Hershey was able to chalk up low- to mid-single-digit average sales growth,” Lash wrote in an earnings note. “From our vantage point, its strategic bent to refocus spend on core brands and geographies should allow for a similar outcome this time around.”

It’s not as if the Pennsylvania-based manufacturer, which generates around 10% of annual sales during Halloween, has paused all innovation this season. In early July, Hershey’s debuted four limited-time products, including Reese’s Franken-Cups, which come with green crème, and vampire-inspired Hershey’s Kisses filled with red, strawberry-flavored crème.

Halloween celebrations are likely to be different this year, with an earlier start to the season, more geographic differences and more at-home activities. Our seasons leadership is driven by our iconic brands, strong innovation, merchandising and great retail execution. $HSY pic.twitter.com/ZJxXs9rgBe

On the optimistic side, there’s reason to believe people might feel comfortable trick-or-treating this year. Buck said there’s no evidence that the coronavirus is spread through packaging or food. On top of that, trick-or-treating is relatively safe because it occurs outdoors.

Plus, dressing up in a costume for the night tends to come with a protective measure that few people would find intrusive or out of place. As she put it: “It’s an event where a lot of masks are already worn.”