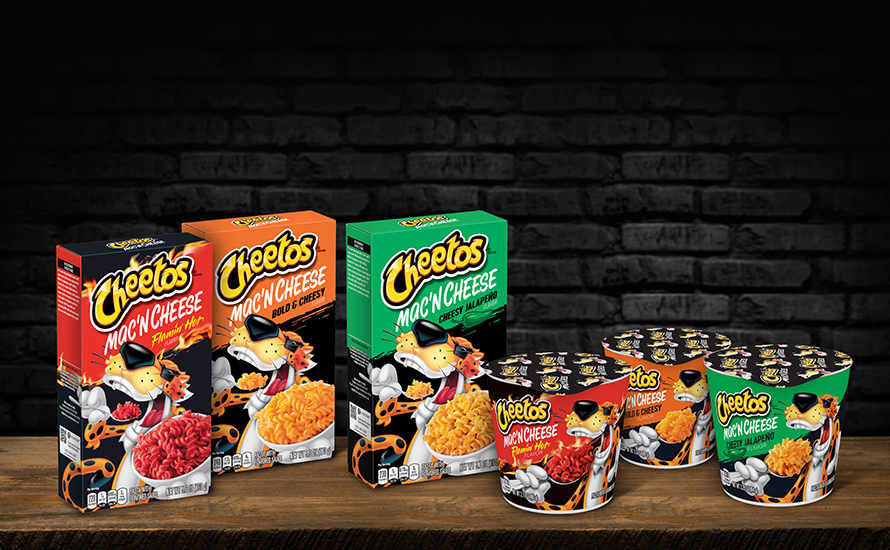 Cheetos Mac ‘N Cheese is available at Walmart starting Aug. 8, and will arrive at retailers nationwide in 2021. Cheetos

Following a rise in home cooking amid the coronavirus crisis, Cheetos is putting its own spin on a beloved dish that will quite literally spice up people’s meals.

Cheetos Mac ‘N Cheese, available in both box and cup packaging, comes in three flavors: Bold & Cheesy, Flamin’ Hot and Cheesy Jalapeño. The corkscrew-shaped pasta noodles are inspired by brand mascot Chester’s cheetah tail, according to Cheetos parent company PepsiCo. It will debut at Walmart locations on Aug. 8 and retailers nationwide in 2021.

“We’ve seen incredible culinary creativity from our Cheetos fans through the years, taking our product and infusing it into recipes and dishes including mac and cheese,” said Rachel Ferdinando, svp and CMO of Frito-Lay North America. “Now, we’re borrowing that inspiration for our latest innovation.”

Americans do seem to enjoy Cheetos. Last year, app-based delivery service goPuff, which provides more than 2,500 products from over 150 facilities around the country, revealed that Flamin’ Hot Cheetos was one of its best-selling snack items for the third year in a row.

While Cheetos Mac ‘N Cheese had been in development prior to the pandemic and was scheduled for release in 2020, Ferdinando said PepsiCo has moved at an accelerated pace to get the product on store shelves.

“The increase in demand for household staples made it clear that consumers would appreciate a convenient and affordable option,” she said.

Ferdinando noted this is the first time two PepsiCo divisions—Frito-Lay North America and Quaker Foods North America—have partnered on this scale to manufacture a new item. “This product merges the iconic Cheetos ‘cheetle’ cheese dust with the capabilities of Quaker’s Pasta Roni brand to disrupt the mac-and-cheese category,” she said.

Recently, Kraft Heinz has been encouraging people to eat its Kraft mac and cheese products for breakfast through a new ad campaign. Since the outbreak of Covid-19, 56% of parents say they have served their kids mac and cheese for breakfast more frequently than prior to the pandemic, according to a company survey involving 1,000 parents.

Kaila is an intern for Adweek in the Brand Marketing Department, and covers news in brand marketing and retail. She is a rising senior at Villanova University pursuing a degree in PR & Advertising and Journalism.
@hiebertpaul paul.hiebert@adweek.com Paul Hiebert is a CPG reporter at Adweek, where he focuses on data-driven stories that help illustrate changes in consumer behavior and sentiment.