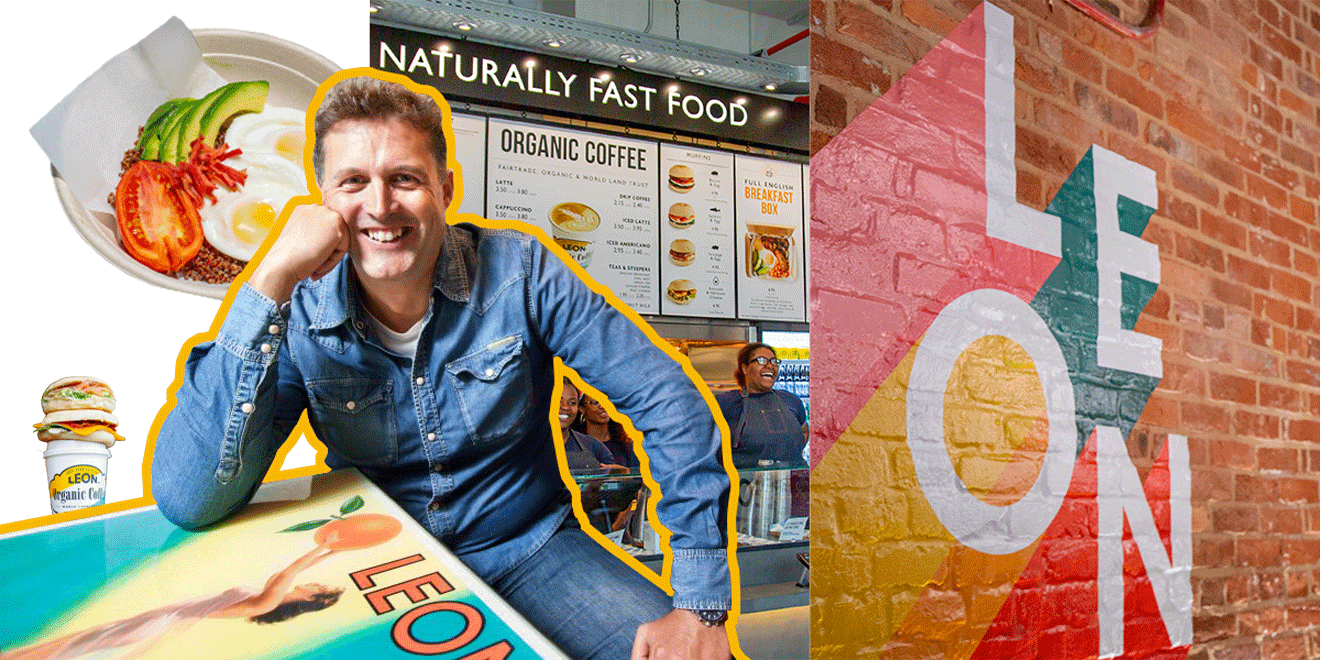 LONDON—John Vincent loves fast food. The founder and CEO of Leon, a U.K.-based restaurant chain, said he grew up savoring his visits to Burger King and McDonald’s. And in 2004, after seven years at management consultancy Bain & Co., Vincent set out to open his own restaurant with a singular lofty goal: to make the food that would exist if fast food existed in heaven.

For Leon, that’s meant offering a sustainable, healthy fast-food option that doesn’t have to mean salads. Instead, it means hot rice boxes with protein and kale slaw, plant-based burgers and gluten-free chicken nuggets, items that seem to belong on a fast-food menu but with ingredients that are better for you. In a conversation at Leon’s London headquarters, Vincent told Adweek, “There’s nothing in the word fast and there’s nothing in the word food that means it has to be bad food.”

That, coupled with a belief that there was a gap in the market when it came to providing all-natural, sustainably made fast food that was healthy, drove Leon’s creation. But Vincent was firm that the concept had to be fast food, not fast casual. (Think McDonald’s, not Chipotle.) What he loves about fast food is the “fun factor” that comes along with each individual dish—customers aren’t choosing the ingredients for the dishes themselves; instead, they’re dining on predesigned classics.

“For us, there was something magical about fast food that we didn’t want to throw away in moving to fast casual,” he said.

Since its London debut in 2004, Leon has expanded throughout England and Europe, with franchises opening in Norway, the Netherlands and Ireland—there are 73 Leon locations worldwide, with 60 in the U.K, 10 in the rest of Europe and three in the U.S. In recent years, Leon has seen continuous growth, with sales numbers surpassing 50 million pounds ($65.7 million) for the first time in 2016.

Right now, Vincent said, expansion in the United States is a top priority, so much so that the company is handling it at the corporate level, rather than allowing franchisees to open outposts as Leon has with previous international expansion efforts. Vincent said the brand wanted to take a more hands-on approach in the U.S., where changes can be made instantly due to a closer proximity to the home office.

“Going into America, we understand that we need to learn, to be more nimble and agile,” he said. “If it was a franchise, we would be divorced from it.” 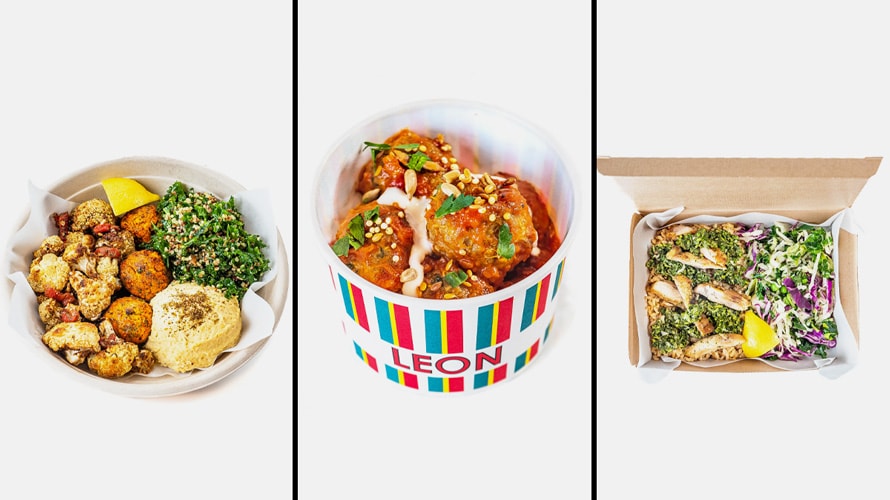 Leon arrived stateside in September 2018 when it opened its first U.S. location in Washington, D.C. It chose the nation’s capital because of its history as the birthplace of other eco-minded restaurant chains like Sweetgreen and Cava, giving “precedent for it being a place where you could export the brand to other cities,” Vincent said.

D.C. isn’t as sprawling as New York, where making a splash as a newcomer would be difficult. Additionally, D.C. is a city with a lot of pedestrians and public transportation users, unlike Los Angeles. There would be customers there seeking healthy, fast options, Vincent reasoned, as well as the potential to foster a sense of community.

“I’m really intrigued by cities the size of D.C., where you can become part of that city,” Vincent said. “If you go to New York, it’s not easy to be a part of the fabric of New York. I’m hoping that if we if we can look at places like Seattle, Denver, Austin, Portland, San Diego, places where we can literally be a part of the community, that is what I’m interested in.”

But which city comes next is still a question. Leon currently has three locations in D.C. Vincent said he wants to solidify the brand’s presence with even more shops there—it’s planning for a location in Fairfax, Va.—before thinking about expanding to other cities.

That would allow the brand “to really develop a strong culture before we start looking to our next location,” said Glenn Edwards, managing director of Leon USA.

“I really am focused on how do we start from scratch?” Vincent said. “This isn’t us importing what Leon is today. This is us taking the Leon purpose, Leon values, Leon attitude and working with Americans to create Leon as an American company.”

Becoming an American business, however, means learning to do things the American way. Vincent said American restaurants are more technologically advanced than their U.K. counterparts, with more restaurant-owned apps and options for ordering online. There are slight differences even down to ingredients. For example, British consumers love halloumi cheese, but most Americans have never heard of it. Americans love sandwiches, while Brits prefer wraps. 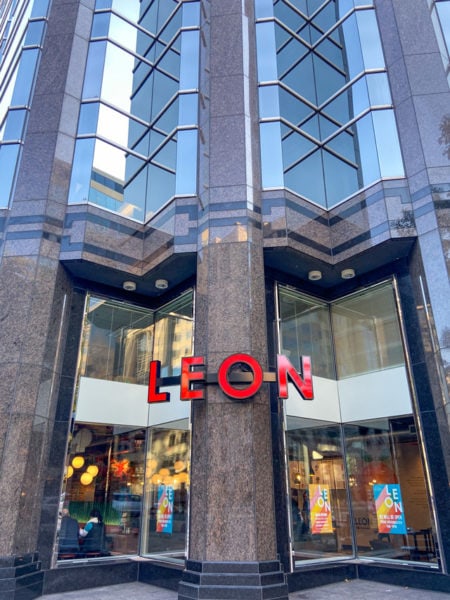 Such differences have meant that arriving in America has required a willingness to learn and adapt to a new culture. In fact, Edwards said, Leon’s brand is built on the idea of each store being unique and suited to its location.

That mindset affects everything from branding to restaurant architecture. Leon’s newest location on New York Avenue in Washington was originally a lumber warehouse that was listed on the National Register of Historic Places. Leon maintained much of the building’s original structure and features.

“It’s really important our managers running the restaurants don’t feel like they’re doing this cookie-cutter mass rollout brand,” Edwards said. “Every restaurant we open as if it were our very first, and every manager runs the restaurant like they’re the king of their ship, the entrepreneurial leader.”

There’s a sense of that entrepreneurial spirit in what Leon is doing in the U.S.—starting in a new place with an audience that’s unfamiliar with its product. Unlike most startups, though, Leon can use its years of experience and data from its U.K. stores as a guide. Edwards said that when selecting locations, Leon looked to what worked in England, from proximity to public transportation to the concentration of office workers in a given area.

Of course, setting up shop is only half the battle when arriving in a new market. Businesses also have to get customers in the door. During Leon’s first 10 years in business, it did no traditional advertising, instead choosing to rely on word of mouth. It’s leaning on similar tactics this time around, with events for D.C.-based influencers, its loyalty program, the Leon Lovers Club, and traditional public relations.

Sustainability across the pond

Leon’s American arrival isn’t just about bringing its products, but also its mission, to the U.S.—a chance to extend its sustainability efforts to a larger audience. All Leon restaurants are powered by renewable energy (solar in the U.K.; turbine and wind in the U.S.) and locally sourced ingredients, and each Leon location has to adhere to certain standards. 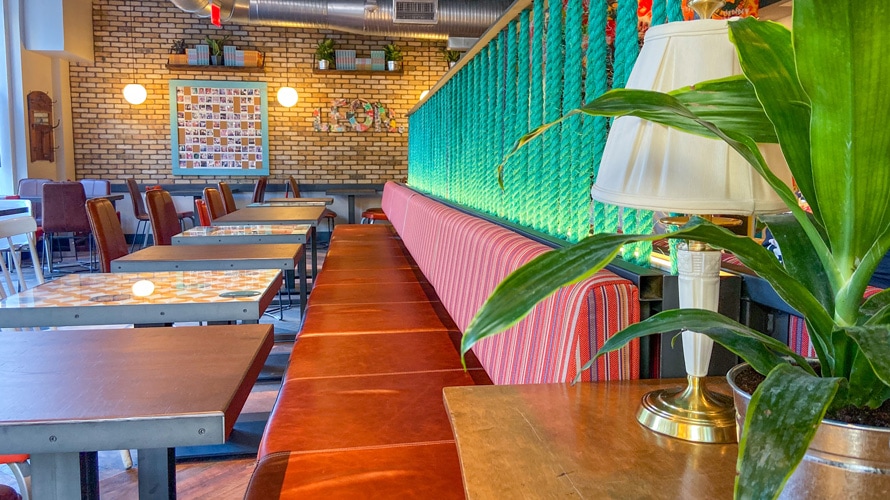 The interior of a Leon restaurant in Washington, D.C.
LEON

Vincent has personally been involved with large-scale sustainability efforts. He has a role on the U.K. government’s Council for Sustainable Business and headed up a 2013 review of the country’s school food program, which helped revise menus in schools across the country. And his co-founder, Henry Dimbleby, founded the U.K.’s Sustainable Restaurant Association and was appointed this summer to lead a government review of England’s food system.

The size of the American market will help achieve Leon’s goals, Vincent believes, but so will the American approach.