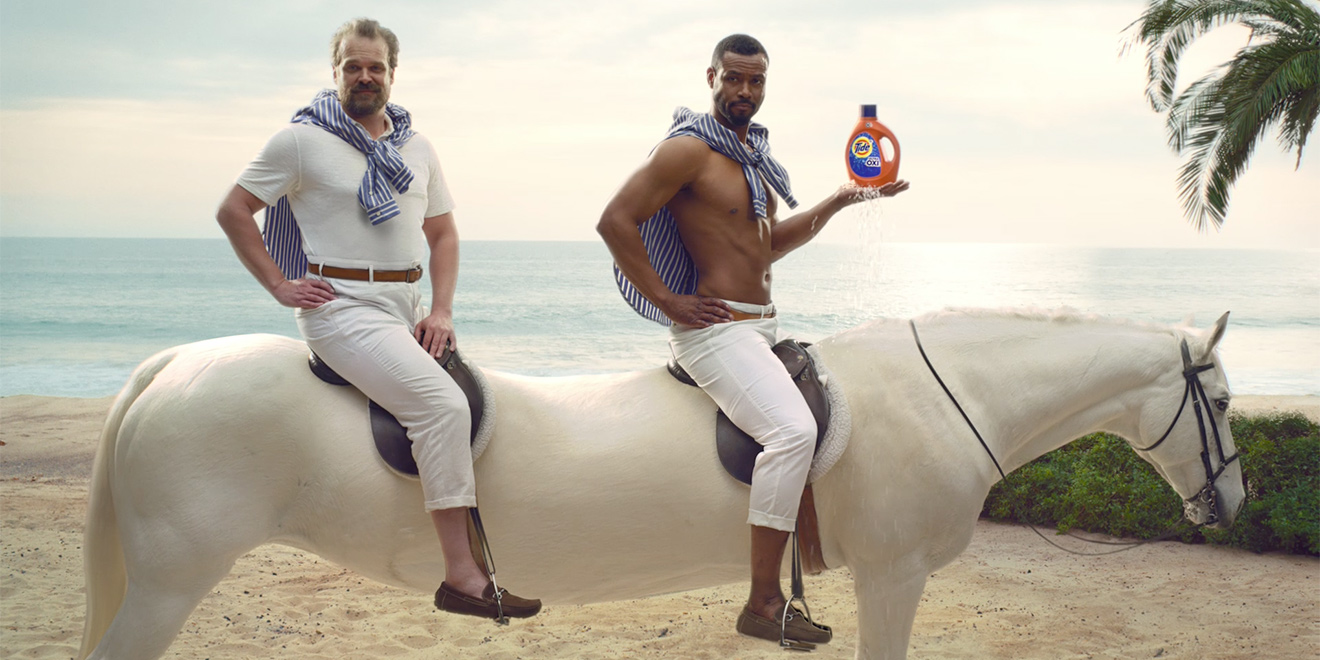 It’s an early evening in January, and David Harbour is already in his pajamas, lying on a mattress without sheets in a country club just outside of Los Angeles. Moments before, he had been jumping on the bed like a giddy teenager at a slumber party. He turns to his side, looks over his shoulder and, with a dreamy-creepy smile, takes a deep breath before earnestly exhaling, “Tide.”

This is the task that Harbour, the actor best-known for playing Jim Hopper on Stranger Things, has been given by Tide and Saatchi & Saatchi New York. It’s the second day of a four-day shoot for Tide’s Super Bowl campaign, and Harbour has already performed many scenes that are arguably just as surreal. (After the jumping, Harbour grabs a white rose from a vase, mugs for the camera and eats the entire flower—chewing it slowly, as if it’s a large wad of rose-flavored bubble gum.)

The point isn’t so much to get weird with Tide—though that’s certainly happening—but to give each moment some semblance of truth so that Saatchi & Saatchi’s punchline lands.

Tide’s wildly ambitious plan is much more involved than your average Super Bowl spot. The detergent brand’s goal is to take over the Super Bowl with a campaign that positions Harbour as an omniscient narrator of sorts, asking Super Bowl viewers to question every ad they see—because if you’re seeing clean clothes, you could be watching a Tide ad.

To accomplish this, the company bought an ad in every quarter—a 45-second establishing spot in the first quarter, along with 15-second ads for each of the following three quarters. Tide then filmed each scene as a separate short spot in the genre of whatever product it’s pretending to pitch. There’s a car ad, a beer ad, a deodorant ad and a half-dozen others, all of which, through various twists, turn out to be pitching the same laundry detergent.

“It’s wildly self-aware,” Harbour tells Adweek in between scenes on set. “The fact that you have this character who’s sort of this Rod Serling of The Twilight Zone of advertising, sort of coming in and being like, ‘Wow, maybe every ad is like a Tide ad,’ and then he pops up in all of these different ads to kind of reveal to you that what you think you’re watching is not actually what you’re watching.”

Taking over the Super Bowl

The idea stemmed from Tide’s position as the leader seller of detergent in the U.S. After all, the brand had more than a quarter of the market share in 2017, according to Statista. If people use Tide at home, why wouldn’t the styling teams for every ad in the Super Bowl also use it on set? (When asked, Tide’s parent company Procter & Gamble said every piece of clothing used in its Super Bowl spots was indeed washed with Tide.)

“The idea itself was really informed by the brand Tide being such an icon, that so many people use it,” said Paul Bichler, Saatchi & Saatchi’s executive creative director. “So it lends itself to this idea—of the people you surround yourself with, half of them are essentially Tide ads.”

Tide has been a regular contender in many Super Bowls over the past decade. Last year, it surprised the audience by doing a stunt with Terry Bradshaw; the football-commentator-turned-Tide-spokesman played along with a fake stain on his shirt during what appeared to be a live broadcast, which was actually shot by Saatchi weeks earlier.

This year, the detergent brand is looking to pull off another stunt—this time, writ large with a massive price tag. With 30 seconds of airtime in the Big Game costing more than $5 million, P&G’s four spots (a total of 90 seconds) add up to around $15 million, without factoring in production, talent and agency fees. What could be worth that much?

According to Vedran Miletic, P&G’s brand director for North America fabric care, the reason for doing the spots is two-fold: On the one hand, Tide has a new scent, Fresh Coral Blast, and a new stain-focused cleaning line called Tide With Ultra Oxy; it’s also, in recent weeks, begun promising a “cleaning power” that he says is 10 times that of Tide’s generic competitors.

“I think, in a very engaging and humorous way, we point to the fact that when you see clean clothes, you should expect that Tide would’ve brought it to you,” Miletic said before filming began for the :15 that will air during the fourth quarter. “We’re really bringing that equity of the brand in a very fresh, humorous and new way.”