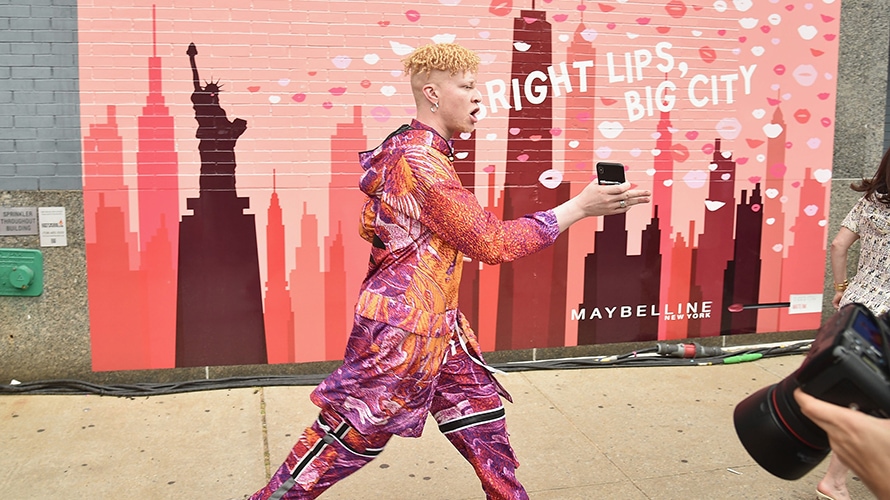 The fashion world—even more than is already present throughout the rest of the year—descends on New York every September and February to celebrate one of its most time-honored traditions: Fashion Week.

The event, founded in 1993 by then-executive director of the Council of Fashion Designers Fern Mallis, has gone through several major transformations, particularly within the last decade. In 2010, it moved from its original location at Bryant Park to Lincoln Center. More changes came in 2015 when Mercedes-Benz, the event’s longtime title sponsor, announced its deal with NYFW would be coming to an end. That same year, the location changed once again, from Lincoln Center to Spring Studios on the far west side of Manhattan. And with the location shifts, more and more designers are choosing to show outside of the fashion week “headquarters,” so to speak, at Spring Studios, and instead scatted at different venues throughout the city.

Show attendees on the streets of NYC.
Bryan Bedder/Getty Images for IMG

Despite all these changes, one thing remains the same: NYFW is still a coveted event when it comes to brand activations, attracting businesses like Visa, Maybelline and Lexus to partner with IMG, the event and talent management company that helps put on NYFW every year. Leslie Russo, IMG’s evp of fashion partnerships and marketing said that NYFW continues to capture the attention of brands because “all eyes worldwide are on fashion during this time,” Russo said. “It’s everyone you want to reach: Influencers, international press, consumers.”

This year, Visa, a new partner for NYFW, will serve as the event’s first official payment technology partner. At Spring Studios, Visa is running contactless “vending machines,” which carry limited-edition items from female designers like Rebecca Minkoff, Vanessa Arizaga and Neely & Chloe, and fittingly, the proceeds from these sales will benefit Women’s World Banking, a non-profit that supports low-income women entrepreneurs around.


“New York Fashion Week is a perfect venue to showcase the latest in payments to an engaged millennial audience at the cutting edge of the retail industry,” said Mary Ann Reilly, svp North America Marketing, Visa.


Russo also added that as fashion magazines—traditionally the go-to way for brands to reach style savvy consumers—have declined over the last few years, events like NYFW are even more important for brands.

“Live experiences matched with talent have become a very successful formula for brands to reach the right audience,” Russo said. “That’s our exact sweet spot. We have events, we represent talent and when you put all those things together, that backdrop becomes a very powerful place where the consumer lives.”

And in that powerful place, brands are able to connect with consumers oftentimes by focusing on a specific message. Maybelline, an NYFW partner since 2009, for example, uses the moment to demonstrate the importance of offering a wide variety of product shades to promote inclusivity in beauty. They partner with several designers each season—this fall, that number is 12 (including Carolina Herrera and Opening Ceremony). It’s a smaller number than they’ve done in years past, and the decision was made in hopes of “expanding our designer partnerships to extend beyond fashion week and focusing on those that resonate with our consumers,” said Amy Whang, svp of marketing for Maybelline New York, adding that NYFW is a “key moment for Maybelline as place to experience “trends in fashion and in beauty.” 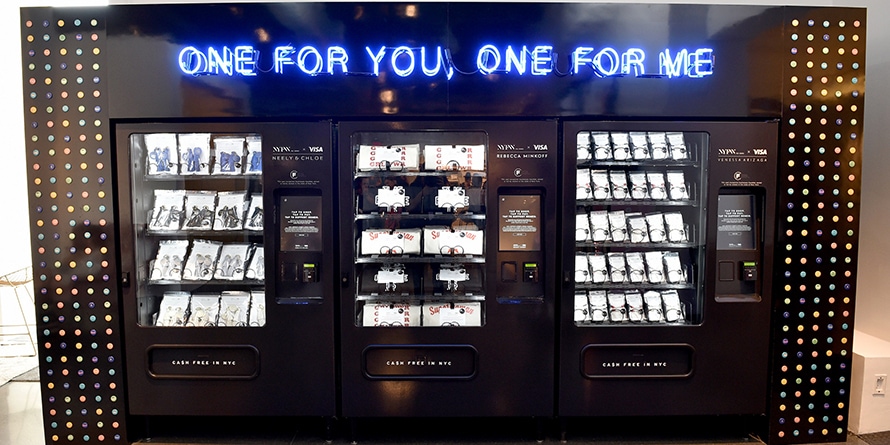 Visa had its own "vending machines" at NYFW.
Bryan Bedder/Getty Images for IMG

Of course, NYFW is only one of many fashion weeks that occur throughout the year. The other three major fashion weeks occur in London, Milan and Paris every year, but events also happen in cities all over the world like Moscow, Tokyo, Sydney, among others. This international reach sets fashion week apart from other brands, as partnerships can carry over from an event in New York to one on the other side of the globe.

“IMG fashion is probably the one place that any global brand could come to and in a very turnkey way, be able to activate globally in fashion without breaking a sweat,” Russo said.

She points to a partnership with Abu Dhabi-based airline Etihad Airways, which saw the brand activate at 17 different fashion week events over the course of six months, as evidence of that. Etihad has further cemented its relationships with notable figures and companies in the fashion industry by partnering with ecommerce companies like Moda Operandi to increase its presence in the Middle East, and launching “Runway to Runway,” a frequent flier program that offers those in the fashion industry flight discounts and other perks. The result, Russo said, is a deeper relationship with Etihad and the fashion world.

“They’ve done a great job of not just branding themselves but also turning it into a real business opportunity for them in reaching a market that they hadn’t traditionally spoken to,” she said.

In large part, what makes NYFW more attractive than ever is its growing accessibility to not just fashion bigwigs the average consumer. In 1993, the shows were attended by only the most exclusive buyers and editors. Today, that audience has grown not just thanks to the rise of influencers, but also due to social media: Anyone can stream a runway show at home. There’s no limit to who brands can connect with.

“If anything [fashion week] is becoming bigger and bigger in terms of its reach,” Russo said. “What used to be an exclusive, smaller event now has all eyes on it globally.”