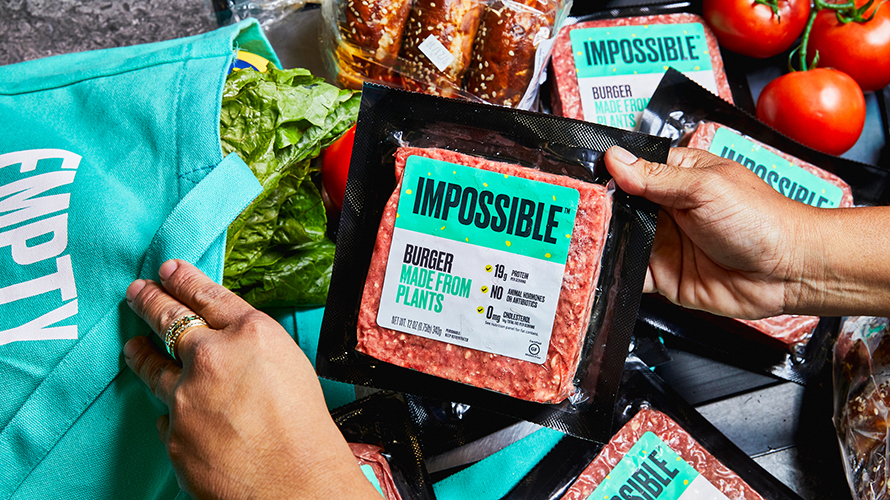 Impossible Foods is striking further into the U.S. heartland with a just-announced deal to sell its popular faux burgers in Walmart stores, beginning today.

The move takes the Silicon Valley-based company far beyond its boutique retail roots and into more than 8,000 total stores, a 50-fold increase in its distribution since early this year. The Walmart deal adds some 2,100 locations to its footprint, which now spans all 50 states, and puts it side-by-side with major competitor Beyond Meat at the retail behemoth.

Impossible’s aggressive growth coincides with the pandemic, as plant-based protein has seen triple-digit spikes in grocery sales amid a Covid-19 outbreak in the country’s slaughterhouses and the ensuing meat shortages and price bumps.

Impossible’s supermarket expansion had already been in the works, though the public health crisis “moved us more quickly into retail, direct-to-consumer and online sales,” said Pat Brown, founder and CEO, during a news conference today announcing the Walmart deal. “We felt a certain obligation to jump in and accelerate as fast as we could.”

Impossible and other players in the space have tried to make up a shortfall from restaurants that closed during lockdown. At the same time, the brands continue to align with fast food outlets for nationwide distribution. Impossible has recently added Starbucks to its roster, with a fake-sausage breakfast sandwich, and Beyond last week unveiled more of its chicken-less chicken at KFC locations in Southern California.

"Walmart stores are the biggest sellers of meat to American consumers—they’re ubiquitous. This is huge exposure for the Impossible brand."
—Pat Brown, founder and CEO, Impossible Foods

Impossible, shifting from its heavy reliance on restaurant sales, has added Trader Joe’s, Kroger, Wegmans, Pavilion and other chains since March. Its Walmart distribution is a significant milestone, execs said, because trial of the product is key to converting consumers from animal-derived meat.

“There’s no more important institution in retail food than Walmart,” said Brown, who called the chain “a kindred spirit” in sustainability goals. “Walmart stores are the biggest sellers of meat to American consumers—they’re ubiquitous. This is huge exposure for the Impossible brand.”

Consumers who buy Impossible products are “90% omnivores,” Brown said, and studies have found that many shoppers want to swap out more of their meat-based meals for plant products.

Impossible continues to work toward scaling its business and lowering its price, according to David Lee, the brand’s CFO. Consumers have often cited affordability as an issue with plant-based protein, which is usually priced higher than traditional meat. Look for discounts in the future, with Impossible trying to match the price of animal meat.

The arrangement with Walmart has been years in the making, the brand’s leadership said, with Impossible increasing its manufacturing and building its supply chain to be able to produce enough meatless burgers to fulfill the projected demand from the retailer. (Its 12-ounce burger packages go on sale today in Walmart fresh-meat cases; also available on the retailer’s app and website).

Beyond Meat still has a dominant position at retail, having made that distribution channel a priority since the company’s launch. The Los Angeles-based company, 2019’s IPO darling, sells at some 25,000 locations, including Costco, Fred Meyer, Albertsons, Kroger, Target, Vons and Whole Foods.