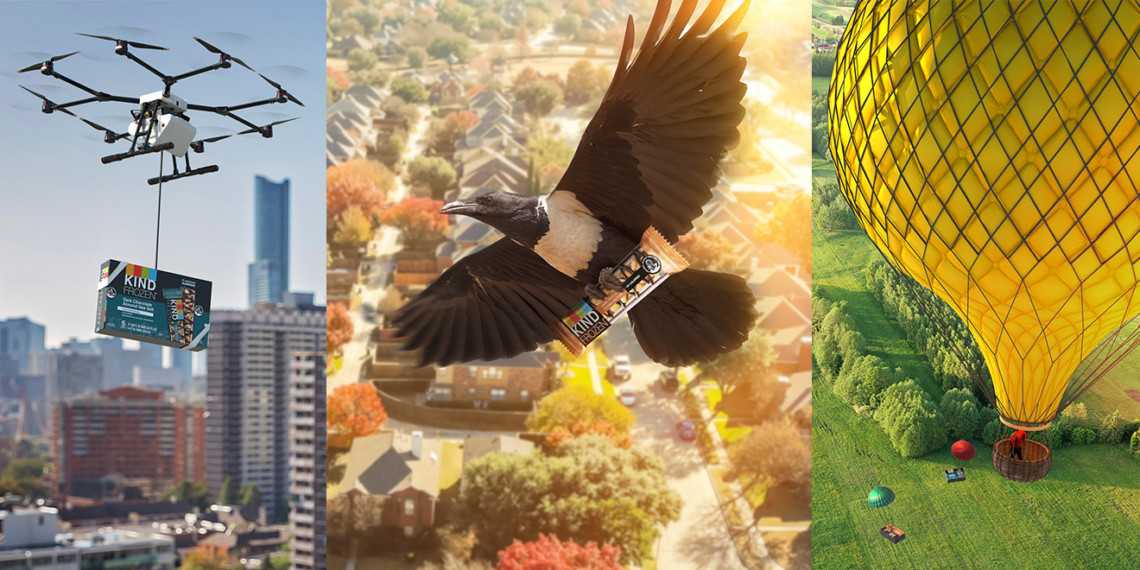 Kind's contest opens today and the brand is accepting responses for a week. Kind Snacks

When Kind Snacks realized that because of Covid-19, it wasn’t going to be able to host the pop-up it had planned for the launch of its new frozen snack bars, the brand knew it had to do something big to stand out.

So rather than choose between a celebrity endorsement and a crazy stunt, Kind chose both. The snack bar brand will deliver frozen snack bars to three lucky contest winners by trained bird, drone or hot air balloon. Then, Queer Eye’s food guru, Antoni Porowski, will video chat with each winner while munching on the frozen treats.

Winners will be chosen by their answers to three questions: what they’d ask Porowski if given the chance, what frozen bar flavor should come next and why they deserve to win. The contest opens today and Kind will be accepting responses for one week. Kind will be promoting it through online video spots, paid social posts and influencer marketing, including Instagram posts and stories by Porowski.

When asked how the brand was going to get the birds on board, svp of integrated communications Jonathan Yohannan didn’t exactly hash out the details, instead chalking it up to “the beauty of experiential marketing.”

“If you can dream it, you can make it happen,” said Yohannan, adding that “birds are quite smart.”

While Kind’s new frozen products hit retail shelves last month, the campaign was delayed by about a month and a half after the pop-up proved impossible given the current climate. That’s something that pandemic-era marketers have experienced in dozens of categories as in-person events or photo shoots are canceled or postponed and customer sentiment changes by the minute.

“We probably had 50 different scenarios laid out at one point,” said Yohannan. “I think around April we still had hope we could pull it off at the end of the summer.” By May, the team made the difficult decision to scrap the initial pop-up activation.

It’s one of dozens of ways that marketers are working to fill the hole left by canceled brand activations and experiential stunts, from virtual festivals and online pop-ups to branded boxes sent directly to influencer’s homes in the hopes of a viral unboxing.