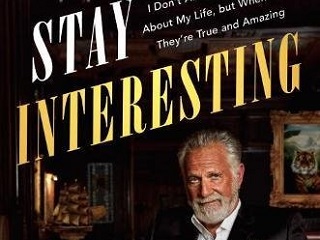 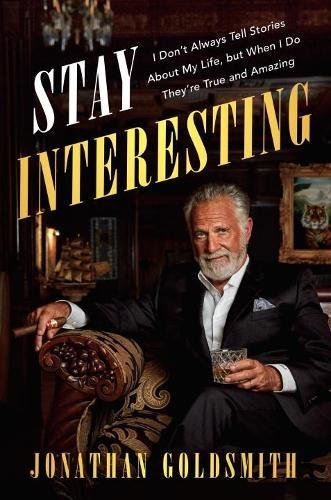 At press time, Jonathan Goldsmith’s memoir Stay Interesting: I Don’t Always Tell Stories About My Life, But When I Do They’re True and Amazing owns the #1, #2 and #5 spots on Amazon’s Men’s Gender Studies bestsellers list. The former Dos Equis pitchman’s Bronx-to-Hollywood life story was released June 13 and the author has been, in this summer beer-drinking season, actively promoting its arrival.

The funniest negative review belongs to Buffalo News contributor Kenneth Young. Heading into the holiday weekend, he warned female readers that the book is ‘unabashedly chauvinistic:’

And there were the less than romantic encounters, the initiation with a prostitute, the Borscht Belt beddings of colleagues as a teen and, in a frenzy of braggadocio, this incredible passage:

‘I had a lovely dalliance with Jack Warner’s much younger girlfriend, and with one of Groucho Marx’s wives. Two congressmen’s wives (both Republican), six vegetarians, nine Buddhists, eighteen nurses, sixteen teachers, eleven subs, countless receptionists … and one runner-up Miss Florida, as well as many extras, thirteen players and one Academy Award winner.’ (I was waiting for ‘and a partridge in a pear tree.’)

For Dwarf and Giant, the blog of downtown Los Angeles literary shrine The Last Bookstore, editor and writer in chief Eric Larkin took a bold stylistic gamble ahead of Goldsmith’s book signing there June 23. He peppers his teaser interview with a series of italicized and imagined adventurous interludes, starting with this one:

I find myself with a parachute at the open doorway of a DC-29 at 12,000 feet. My bowels have given me an ultimatum (“Sit down or we let go”), but I have no choice. Goldsmith lit his cigar and jumped about 10 seconds ago, and if I want to talk to him, I have to follow. Now.

I catch up to him with a laser-like freefall (mostly because I couldn’t find my parachute pull cord, mostly because my eyes were closed, with tears), and shout my questions into his ear.

Finally, Business Insider, which has in the past done leading-edge video coverage of Goldsmith, checked back in with another in connection with the book and Goldsmith’s new campaign for Astral Tequila. The video is fluff, but the YouTube comments remind of the power of the Dos Equis campaign’s punchline, channeled of course by Goldsmith for the memoir title:

Tyler Winkle: I don’t always watch 1 minute YouTube videos, but when I do I need to see a 30-second commercial in front of it.

Barry Allard: I don’t always read YouTube comments, but when I do, it requires drinking hard alcohol afterwards.

Neville Chan: I don’t always finish my sentences, but when I do

Previously on Fishbowl:
New ‘Most Interesting Man’ Gets the TMZ Thumbs Down