A July air conditioner is mean to complement the room, rather than stick out. July

In recent years, home technologies have gotten sleeker and more modern. Televisions are thinner than ever—there are even options that make them resemble an oversized framed photograph, a piece of art, rather than an electronic device. Long gone are the days of massive boom boxes; now, home speakers come in the form of Amazon’s Echo Dot or Google’s Home Mini, perched on the edge of a bookshelf or windowsill.

But even as those products have undergone modern aesthetic upgrades, the window air conditioning unit remains an unavoidable eyesore in most New York apartments—even the most aesthetically pleasing ones. And what’s more, the market is controlled by a few brands, and the products are almost all identical: utilitarian, and very clearly an appliance.

July, a new direct-to-consumer brand that sells window air conditioning units (and named, of course, for the month in the middle of the season during which their use is most prevalent), wants to change that. Its proposition is simple: a cooling brand that views the window A/C unit as a design piece, rather than merely an appliance.

The company rolled out its waitlist at the end of April, and within five days 3,000 people had signed up; as of press time, the list had grown to 8,000. Early customers get 25% off their units, which normally cost $349 (6,000 BTU) and $399 (8,000 BTU). This year’s initial release is a limited run, with those on the waitlist guaranteed a product by the summer months.

For Saigol, manufacturing these units is something he’s intimately familiar with: His family was in the business, so he grew up with air conditioning being a part of his life, with conversations about the product at the dinner table and trips to the factory floor on days off from school.

“It was always been top of mind that there was something here that needed to be done,” he said.

Still, to better acquaint themselves with the product, how it’s made and, perhaps most importantly, what consumers felt was missing from the available options, Saigol and Rauterkus spent a summer selling the units themselves through a small business they called Don’t Be Hot. They sold the units, delivering and installing them themselves, which allowed them to recognize the pain points of the process along the way and get to know the people who would end up being their customers once the business launched.

“We wanted to go and learn first, really before we put pen to paper if you will, in terms of what to build, what to design and how to better process,” Saigol said. “We would have just designed it without really learning, and we would have not ended up where we are today.” 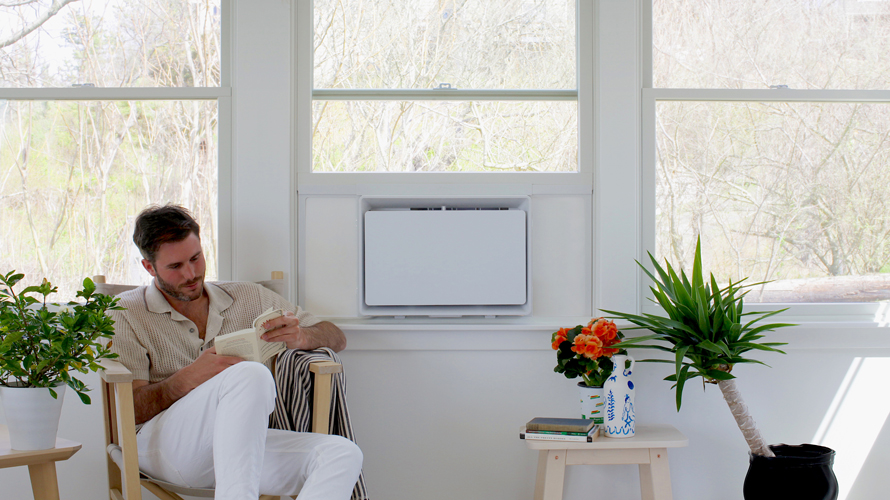 Those points, they discovered, beyond the aesthetic issues they had already identified, were twofold: The process of installing the unit itself was cumbersome and intimidating, and many consumers also worried about the economic impact of their products.

The resulting July product is a sleek square, devoid of the vents on classic window A/C units. Its installation process is more simple: Rather than placing the entire system in the window, playing a game of chance to secure it in the proper spot without having it fall onto the sidewalk below, July’s units have users first insert a frame that locks into the window, then simply slide in the unit until it clicks in into place. For certain key markets, starting with New York (where central A/C is rare and window-mounted units abound), July will even offer same-day delivery, including carrying the unit upstairs.

“There’s such fear around the experience of holding it out on the window, dangling, worried about dropping it,” said Rauterkus. “That became really important to us, and what we did to solve that is introduced now patent-pending technology that really reinvents the way the A/C is installed, really making it easy and user friendly so everyone can do it.”

As for the environmental aspects, Rauterkus said July’s product uses a “state-of-the-art refrigerant” that many of its competitors don’t use, which leads to two-thirds less emissions and should save consumers about 10% on their energy bills.

Creating an A/C experience that’s easier to install with less damage done to the environment is, of course, a major selling point for the brand. But what really sets July apart is its product: Perhaps never before have consumers truly had aesthetic options when it comes to purchasing a window air conditioner unit. Even with a number of companies producing the product, the options are all relatively uniform.

“We wanted to create a beautiful product that was a design object,” Saigol said. “The space that these A/Cs take in your home is a prominent space; it’s in that bedroom or living room window. It’s not like a modem or router that goes into a closet, it’s not something that you can hide away. This is a part of your space.”

The design process in repositioning the A/C unit as a piece of furniture, not an appliance, meant considering a lot of details. Most window A/C units feature a company logo—but furniture doesn’t have logos, so July’s product doesn’t either. The front is covered with a solid panel, which comes in several colors (white, light blue, gray and ash wood) that users can switch out and customize to better fit their space. More covers in a greater number of colors and patterns are on the way.

The goal, said Saigol, was to create a product that didn’t “stick out like a sore thumb in the window,” but would add to the window’s aesthetic as well as the overall home decor.

“Everybody takes so much pride in the way that their home looks,” Saigol said. “They choose every piece of furniture, and here they were all stuck with the exact same unit despite having a completely different aesthetic.”

It’s this differentiation that Saigol and Rauterkus hope will set July apart from its competition, which, as typically the case with many new DTC brands, exists in a space that hasn’t been updated for years.

“Many well known appliance companies, like GE and Frigidaire, have brand awareness, but none of them have really been talking to the customer in many decades,” Rauterkus said. “None of them have built anything special or unique around their cooling capabilities; it’s just another subcategory of appliances. We wanted was really create a brand that was beautiful as the product itself, as differentiated as the product is from the competition.”