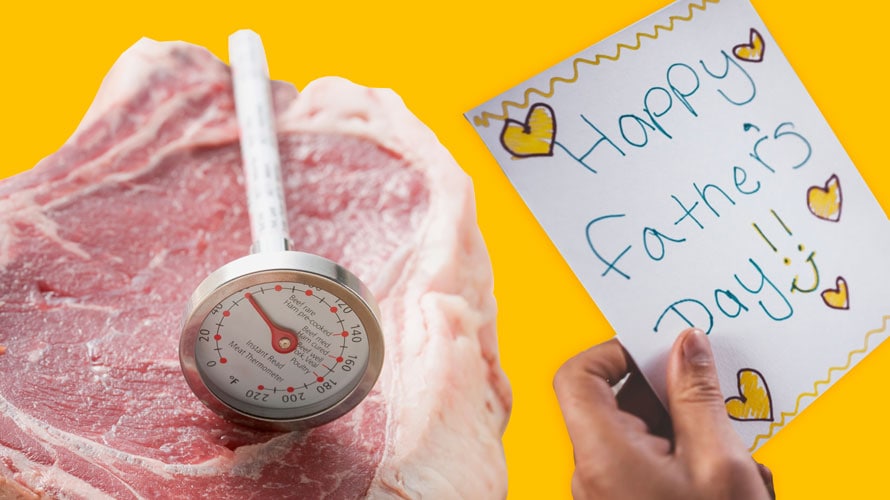 It's easy to buy your dad an uninspired Father's Day gift, such as a meat thermometer. Getty Images

It was Father’s Day on Sunday, and I frantically searched for the perfect gift for my dad.

Last year, my annual search of “best Father’s Day gifts” yielded a meat thermometer. As he unwrapped an object that bore a heavy resemblance to a rectal probe at our kitchen table, he (very politely) asked what exactly he’d been gifted. “It’s a thermometer … for meat. For all the barbecuing,” I said feebly.

I’d been lazy. He doesn’t even barbecue that much. I know he’s not a meat thermometer kind of guy, just as I know that meat thermometers make rubbish gifts. And so, I made an internal promise to never give my dad—a man who loves books and travel, who moved continents to give his children a better life, who plaited my hair and sang me to sleep as a child—such an uninspiring gift ever again.

We shouldn’t shackle fathers to an outmoded version of masculinity any more than we should expect infallibility as the female counterpoint.

But when I look at the average brand offering for Father’s Day, I can’t help but wonder if we’ve all become lazy. This year’s list of “best Father’s Day gifts” once again turns up the usual suspects: beer, barbecue kits, hot sauce and—inexplicably—a framed photo of Robert Redford. U.K. supermarket Morrison’s are apparently serving up 650 grams “Mighty Meat Feast” for a fiver, promising dad the intestinal turmoil of a foie gras goose come Sunday night. As expected, the card selection is equally basic: a mixture of fart jokes, “bank of dad” gags and cartoon pint glasses.

The average gift offering today reduces fathers to spicy condiment guzzling, beer-bellied bumblers cursed with chronic flatulence. This is both oddly infantilizing and patently reductive, diminishing the growing number of men who play an active role in child-rearing and shoulder their share of domestic duties. It reinforces tired gender stereotypes, defining men with navy color palettes and bank balances to be bestowed generously upon their offspring. If you’re feeling fancy, maybe you get to be suave cool dad, with a decanter of scotch and a few leather goods.

We shouldn’t shackle fathers to an outmoded version of masculinity any more than we should expect infallibility as the female counterpoint. I eat my weight in burgers more regularly than I care to admit. My mother puts away gallons of fiendishly hot pickles without breaking a sweat. One of my favorite friends regularly hotboxes her partner with atomic bedtime farts. But for Mother’s Day, we default to flowers and chocolate. Our cards elevate moms to saint-like status, emotional guardians whose biggest foible is a penchant for prosecco. Failure to make space for women to be as flawed as men and for men to be as caring as women is damaging for everyone. Trivially, the men I know unwind with yoga and face masks and pick salad over steaks. Vitally, they take it in turns with their partners to accelerate and decelerate careers, to share responsibility for breadwinning and childcare.

From magazines to supermarkets, makeup to beers, most brands enjoy the visibility and scale that come with big marketing budgets and even bigger product development. Particularly in fashion, the branding world is waking up to inclusivity, both in their campaigns and the products they create. But too much of this still feels like diversity as a statement, an exercise in advertising woke credentials rather than a long-term commitment to progress. This matters because it’s in the subtleties, the contexts, the premises that we can make a difference.

The version of the world that brands reflect back at us informs our sense of normalcy, helps set our benchmarks for ordinary and creates a narrative for the world we inhabit. A father committed to day-to-day domesticity needs to feel like the set-up, not the punchline. As brands, if this is the world we want to live in, then we have a responsibility to create it.

@Anjijoseph91 Anjali Joseph is a senior strategist at consultancy Zag.