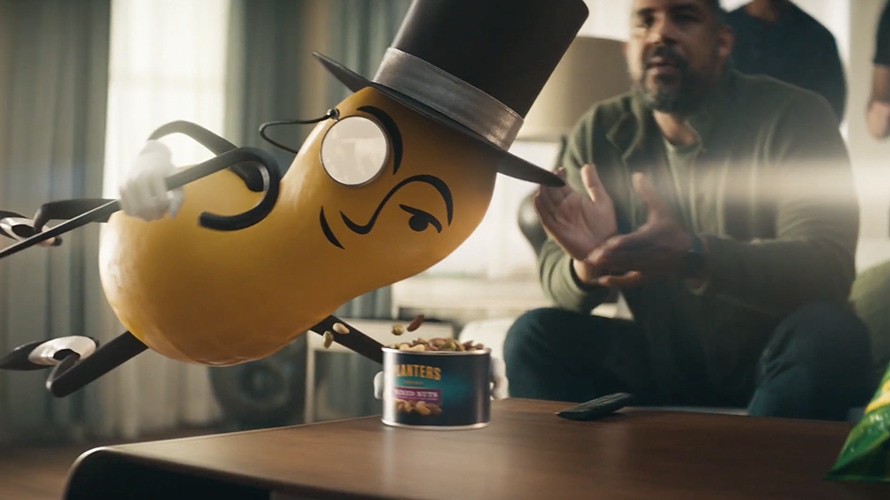 Planters has gotten plenty of mileage out of its Nutmobiles since 1935, when the company first put a peanut-shaped car on the road to drum up attention. The enormous motorized legumes have since crisscrossed the country, popping up everywhere from the Macy’s Thanksgiving Day Parade to fans’ birthday parties. So it was probably just a matter of time before the 26 foot-long fiberglass peanut motored its way into the Super Bowl.

And boy, has it. In its 30-second ad, the Nutmobile turns in the kind of gravity-defying performance nary seen since the famous bus-jump scene in Speed. Not only does the peanut manage to jump over a semi-truck, Mr. Peanut himself is doing the driving. The backing track is supplied by the redoubtable Motley Crue.

Oh, and by the way, Alex Rodriguez and Charlie Sheen are in the ad, as well.

As the plot unfolds, viewers learn that Mr. Peanut’s crazy driving is part of a mission to keep A-Rod from snacking on kale chips during the game. The mascot manages to deliver a dish of peanuts to his living room in the nick of time.

“Mr. Peanut has plenty of wisdom and life experience to help out his fans when they need him most,” Kraft Heinz marketing director of snacks and desserts Luke Cole said in a statement.

As far as Sheen goes, his self-effacing performance is limited to a one-liner about how many people believe he is nuts. (Whether he is or not, his big mouth and alarming behavior did get him canned from Two and a Half Men in 2011, and has since won him a “Meltdown” section on his Wikipedia page.)

Rodriguez, who is now 43, is a smug and likable presence—but the real star here is, of course, Mr. Peanut, who’s actually never appeared in a Super Bowl spot before. The top-hatted mascot has been a fixture in advertising since 1916, but it took CGI technology to give him the moves and attitude necessary to hold down the lead in this spot. VaynerMedia produced the spot.

In addition to the ad itself, Planters plans to give away “epic” prizes during certain “crunch moments” in the game itself. Fans can follow @MrPeanut on Twitter to find out more.