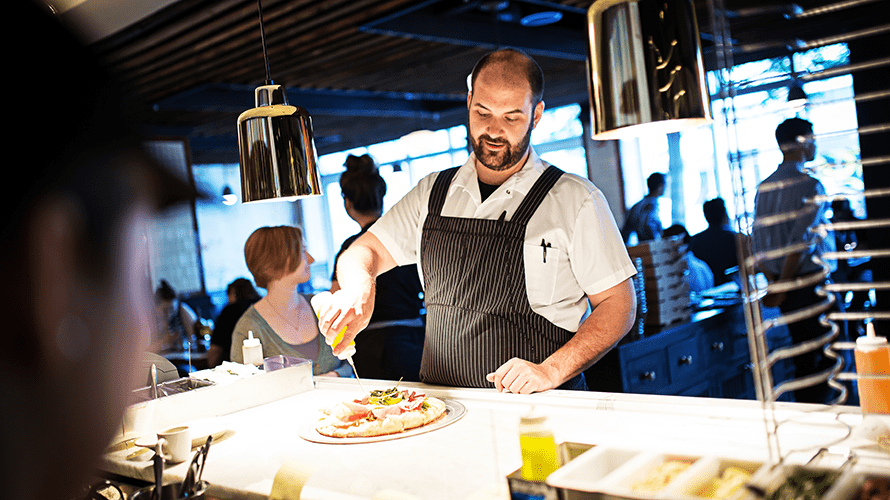 Resy's Off Menu Week kicks off next month in L.A., and will finish up in Austin in December. Resy

Resy and Capital One are teaming up to create a new kind of restaurant week—one that capitalizes on the brand’s desire to continue its expansion beyond simply being a reservation booking app and into a destination for events.

The resulting franchise is Off Menu Week, a six-city, year-long project that Resy is hoping to make into an ongoing experience for years to come. It’s meant to be something of a modern update to Restaurant Week, and will roll out next month, starting in Los Angeles from Feb. 25 through March 3.

Throughout the year, Off Menu Week will travel to six different cities: Beyond L.A., it’ll visit Washington, D.C., New York City, Chicago, San Francisco and Austin. For its week-long turn in each city, Resy will offer reservations at 10 to 15 restaurants. And throughout that week, the people who snag those reservations will be treated to a special menu, curated with selections that don’t normally appear on the eatery’s menu. It will offer items that the chefs have cooked up for the occasion, or ones that they’ve been testing out for future regular menu inclusion.

The idea, Resy’s CMO Victoria Vaynberg said, is not only to better connect people with chefs, but to make guests feel like they’re getting a taste of something exclusive.

“We wanted people to experience what it feels like to be an insider and a regular at these restaurants,” said Vaynberg. “It’s about bringing this closer connection between the restaurants and the diners. The idea is to capture this research, development and testing phase—having these off-menu items that you can access for one week only.”

Though signature, already-on-the-menu dishes will also be included (to give first-time visitors a chance to see what the hype is all about), Off Menu Week primarily revolves around the idea of giving diners the opportunity to sample new menu items. 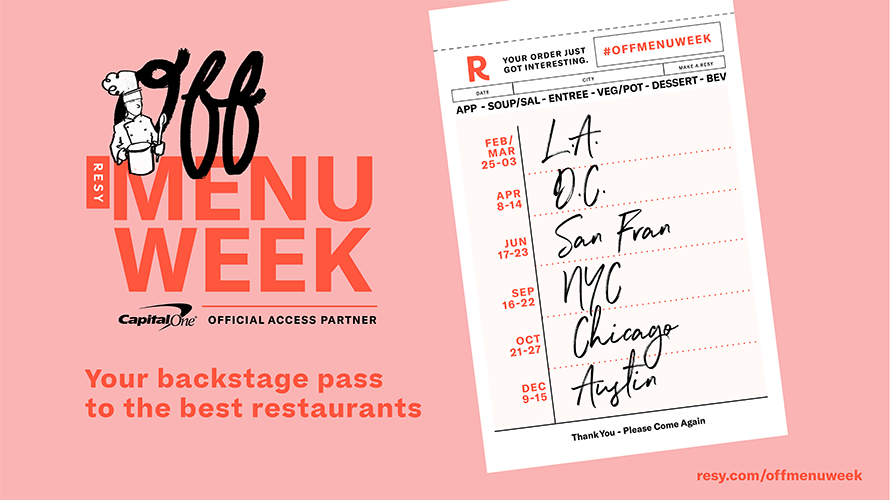 This event is a definite departure from the standard Restaurant Week formula. The first Restaurant Week debuted in New York City in 1992 as a promotional event to draw in lunch crowds during the Democratic National Convention. Since then, it’s grown to a twice-yearly lunch and dinner event that typically gives customers a chance to sample a wide swath of the menu’s offerings with a prix-fixe menu option that’s touted as a deal compared to what you’d normally pay for the same set of courses. Though Restaurant Week was originally a New York creation, it’s expanded to many other cities.

But simply getting a good deal on food you could have on any other occasion isn’t enough to for today’s consumers, particularly in the six markets Resy has chosen, cities that are chock full of foodies, said Vaynberg.

“People are willing to pay and spend their disposable income on an experience, but those experiences have to be worthwhile,” she said. “They really have to be a value add, and have to feel special. You don’t want to leave something feeling otherwise.”

Partnering with Resy to put on Off Menu Week is Capital One, which, with the launch of its food-focused Savor card at the end of 2017, has “gone all-in” on cultivating dining-related experiences, according to Vaynberg. As part of the partnership, Capital One cardmembers will get early access to book the reservations in each of the cities.

Vaynberg admits that while Resy is still primarily a tech company, Off Menu Week serves as a symptom of the brand’s continued growth into the event space, which has included Franks’ Backyard Chef Series, a backyard meal and chef meet-and-greet at Brooklyn eatery Frankies 457, as well as chef series event The Women of Food at San Francisco bistro Petit Crenn. The franchise Off Menu Week is the next step in that progression.

And in the same way the platform aspires to be on the cutting edge when it comes to the restaurants they work, they hope Off Menu Week offers a similarly fresh take.

As Vaynberg said: “We want people to leave this feeling like, I just went to something I’ve never been to before.”