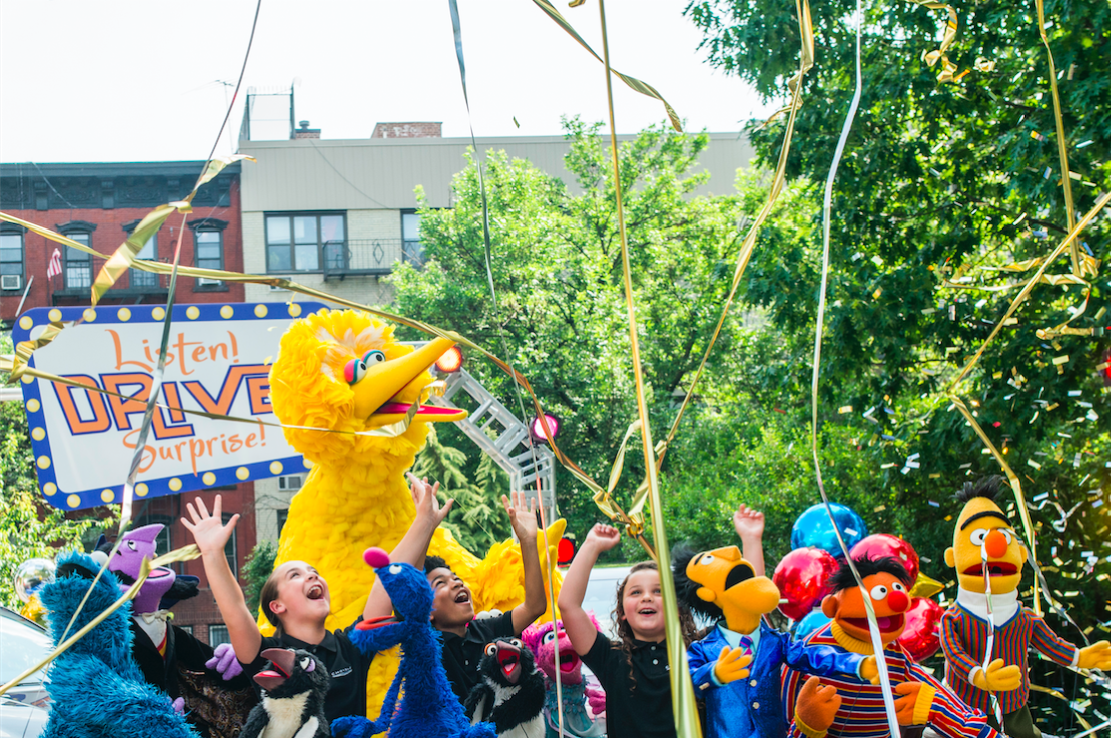 A paparazzo has found his way onto the set of an atypical outdoor Sesame Street shoot. He’s trying to snap a picture of a motionless Big Bird, who has just emerged from under a sheet, so that his handler can give me a peek of the empty costume and tell me a bit about the 10,000 individually dyed Turkey feathers that make up his body.

Whatever the paparazzo got is likely unusable, but the Sesame Workshop team is very careful with its beloved characters—the public should only see them when the performers are animating them—so they try to shoo away the unwelcome photographer. (They can’t technically tell him to leave because we’re in a public park, New York City’s Tompkins Square.) He’s able to snag a few shots of the bird’s behind.

“Our characters are cultural icons as much as they are educational vehicles so [paparazzi are] common when we’re in public,” says Steve Youngwood, chief operating officer of Sesame Workshop. “It’s actually very rare that we’re filming out on the streets at a public location so that probably enhanced [the interest] even more.”

It’s a sweltering 90-degree day in mid-June and the crew is setting up a shot featuring several familiar faces (Elmo, Cookie Monster, Bert, Ernie, The Count, etc.) for a new game show, “Listen, Drive, Surprise!,” launching today from Sesame Street and Chrysler. The digital series, from creative shop Mediabrands Society, will have 10 total co-branded videos, with the first four debuting today. It’s the first piece of a Chrysler’s sponsorship of the Sesame Workshop’s PBS show and digital content.

Matt Vogel, who plays Big Bird (and The Count), is doing double—actually triple—duty on this shoot as Sesame Street’s puppet captain (sort of like a director, but he’s also wrangling puppets and puppeteers and dealing with any puppet-specific issues). He’s off sorting out how he and the director of photography want the shot to look so we’ve got a moment to peep the costume. Coque feathers are used for Big Bird’s head and Ostrich feathers are used for his tail. It makes sense that Sesame wouldn’t want you to see Big Bird this way: his eyes point down, unmoving, as if some existential paranoia has set it, but in the show, with all the other famous characters in tow and Vogel inside, Big Bird is goofy, lovable and alive.

The game show is a driving contest between the characters meant to showcase Chrysler’s Pacifica and Pacifica Hybrid minivans as well as entertain. The Sesame characters also interact with Chrysler’s Pacifica kids—the brand’s spin on the “typical golf shirt and khakis guy,” who’d tell you about the minivan’s many functions, according to Tim Kuniskis, head of passenger cars for Dodge, SRT, Chrysler and Fiat, FCA North America. For most of the day’s shoot, 12-year-old actor Andre Robinson (he plays a Pacifica kid named Miles) is doing a tag-team with Guy Smiley but because he’s a human and not a puppet he’s dealing with the sun in his eyes and flip flops that are burning his feet. To be fair, the puppeteer playing Guy Smiley has to contort his body and deal with the blazing heat.

The partnership is strategic: Sesame Workshop needs brands like Chrysler to help fund what it does and Chrysler needs an engaging and informative way to sell families on its minivans which means telling them about the various innovations this particular model has (a vacuum, more storage, etc.). “Talking about how a minivan is the best tool for a family… that’s not the most emotional, exciting thing,” says Kuniskis. “How do you make exciting, engaging, [content] for our consumer to learn about and want to learn about our minivan? Sesame Workshop has been doing engaging education better than anybody for the last 47 years.”

Adds Youngwood: “We’re very selective when we partner with another brand and it doesn’t happen that often. … Partners like Chrysler help us extend our reach in new and creative ways, and support Sesame Workshop’s nonprofit mission to help kids grow smarter, stronger and kinder.”

Apple, IBM and AT&T have been Sesame Workshop partners in recent years.