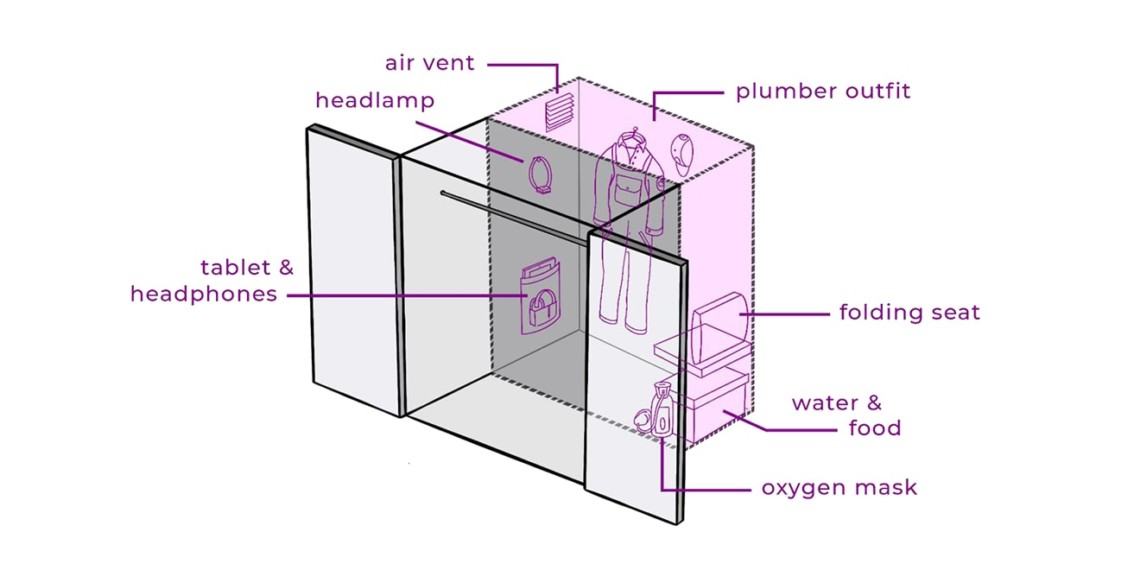 The Gleeden Closet offers a variety of resources to help paramours caught in a pickle. Gleeden

The French dating site Gleeden, whose target user base is largely women already in relationships, has announced its newest innovation in infidelity: the Gleeden Closet.

This invention purports to replace your bedroom closet with one that features a hidden compartment, where a panicking paramour can hide for extended periods, thanks to the closet’s supply of water, food and oxygen.

The plumber outfit is an especially nice touch.

As the video below shows, it’s so cozy thanks to amenities like the tablet and headphones, your secret suitor might not want to leave.

If you’re thinking that such a home addition might be right for you…then it might be time to re-analyze some life decisions. But also, it’s not actually real. Those who try to pre-order the Gleeden Closet are redirected to a crowdfunding page where the dating site has raised zero of the $1 million needed to bring this idea to life.

Obviously a promotional stunt, the closet was cooked up to get people talking about Gleeden, whose name recognition has largely been driven by the predictable controversy around its business model.

Gleeden refers to itself as “a pioneer in the extramarital dating industry” that was made “by women for women.” It claims to have more than 6 million members worldwide.

Obviously it’s not the first brand to try and own the affair audience. Canadian-based extramarital hookup site Ashley Madison spent many years grinding out some of the most eye-rolling and inane ad campaigns until a high-profile data breach outed many of its users in 2015. Ashley Madison tried to revamp its image in 2016 with more mature marketing and by dropping its longtime tagline: “Life is short. Have an affair.” But the tagline returned in 2017, and the site now claims to have 60 million users.