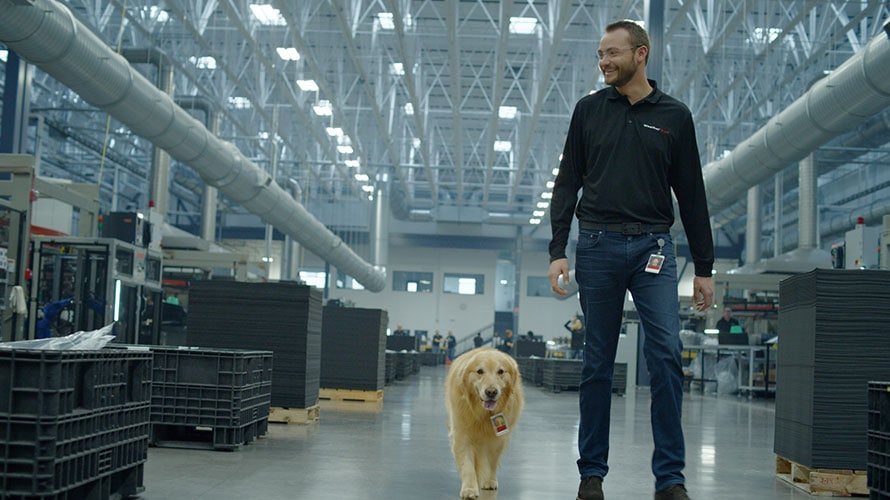 WeatherTech CEO David MacNeil is, in his own words, a proud doggy dad. That’s because his pup—a 6-year-old golden retriever named Scout—is the star of the auto accessories company’s 2019 Super Bowl ad.

The 45-second spot, which is slated to run during the first half of the Super Bowl broadcast on Feb. 3, features Scout adorned in a WeatherTech employee badge, trotting through a WeatherTech facility alongside before heading to another floor to show off the company’s new pet bowl brand, PetComfort.

MacNeil, who also makes a cameo in the ad, said his interest in developing a pet feeding system came after he lost three dogs to cancer and began researching toxins contained in pet bowls and pet food.

“Even if you put great pet food in a toxic pet bowl, you still have something toxic,” MacNeil said. “So we are using all human food standards to eliminate the risk of any heavy metals or other contaminants.”

There are a few other beloved family members featured in the ad, too, including two of MacNeil’s children. The rest of the people in the commercial are WeatherTech employees. (The remaining pets shown in the spot don’t have an official affiliation with the company.)

The spot, produced by the Illinois-based Pinnacle Advertising, is intended to marry WeatherTech’s made-in-America focus of previous years with the new pet brand, which is focused primarily on the safety of the product, Pinnacle president and CEO Mike Magnusson said.

“This is a brand spot, and it’s important for the launch of PetComfort on this type of scale to have the the same level of trust in the product integrated with it as WeatherTech does with its accessories,” Magnusson said. “We want to make sure the consumers know that there’s a very safe product out there to feed their pets.”

The ad is WeatherTech’s sixth Superbowl commercial, and Magnusson said Pinnacle began conceptualizing on the creative in April before settling on it in July. The creative is a slight departure from previous years, which focused more heavily on WeatherTech’s credentials as an American manufacturer and on the brand’s auto accessories.

The company’s ad during the 2018 Superbowl made waves for imagery of the construction of a new WeatherTech facility, which some viewers interpreted as being supportive of President Donald Trump’s calls for a southern border wall.  MacNeil, who donated to the Trump inauguration, said the spot was not intended to be divisive or send any message about immigration; he has since been outspoken in his support for the Deferred Action for Childhood Arrivals immigration policy.

As for the 2019 ad, WeatherTech still notes that the products are made in America.

“Well before the current administration and well after the administration, we will always be promoting American jobs and American manufacturing,” MacNeil said.  “Patriotism isn’t political.”