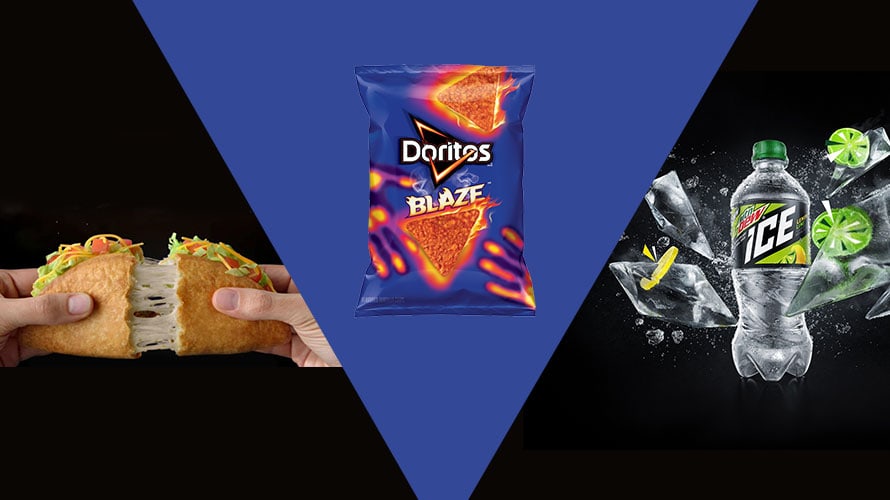 During the biggest advertising event of the year last year (a.k.a. the Super Bowl), PepsiCo introduced two new products: lemon-lime Mountain Dew Ice and spicy Doritos Blaze. The more than 103 million people who tuned into the Big Game witnessed an epic rap battle between Morgan Freeman and Peter Dinklage, with the help of Missy Elliott and Busta Rhymes, respectively.

That ad garnered more than 9.6 billion media impressions and won the “Blitz” award in the first Twitter Brand Bowl for having the highest velocity of most tweets per minute, according to PepsiCo.

During the 2016 Super Bowl, Taco Bell’s debut of the Quesalupa became its most successful product launch at the time (it has since been surpassed by the introduction of Nacho Fries at the beginning of 2018). The Yum! Brands fast-food chain created pregame buzz around the launch by teasing the introduction of a new menu item without revealing what it was before the Big Game.

Companies are increasingly seeing the value in promoting new products in the Super Bowl, over their household brands that may already be considered staples to American consumers.

This year, Anheuser-Busch is promoting three new products in the game (out of a total of seven) including Budweiser: Copper Lager, Michelob Ultra: Pure Gold and Bon & Viv SpikedSeltzer. Kraft-Heinz’s relatively new frozen foods brand Devour, which was rolled out in 2016, is making its Super Bowl debut. And PepsiCo is returning with three 30-second spots, one of which features Michael Bublé and will spotlight Bubly, its one-year-old sparkling water business. Another starring Chance the Rapper will promote new Doritos flavor Flamin’ Hot Nacho.

Anheuser-Busch U.S. chief marketing officer Marcel Marcondes said “the Super Bowl will be the platform to propel” its new brands “as there’s no other moment like it to capture attention.”

“We have really high ambitions for Devour as a brand and what bigger stage could we bring it to than the Super Bowl?” commented Katy Marshall, marketing and sales lead for Springboard brands at Kraft-Heinz, which includes Devour. “It’s the pinnacle of advertising and that type of stage aligns with the dreams and goals that we have for this brand.”

The essential logic behind launching new products in the Super Bowl is really quite simple—it’s the one time people are guaranteed to pay attention.

“If you’re going to tell America your product will be “#BiggerThan” anything in culture, then a pretty great place to do that is during the biggest media event,” said Brett Craig, chief creative officer of Deutsch LA, which created Taco Bell’s 2016 Super Bowl ad.

Based on social interactions alone, no other broadcast event in the U.S. comes close to touching the Super Bowl.

Last year, there were 170.7 million social interactions across Facebook, Instagram and Twitter about the Big Game, compared to just 22.3 million for one of the next most-watched televised events: the Oscars, according to Nielsen.

“If you have a new product, and you want to launch that product in the Super Bowl, it’s a valuable option for you to explore,” said Jeremy Carey, managing director at Optimum Sports, a sports marketing division of Omnicom Media Group.

Carey oversees all of Omnicom’s Super Bowl ad buys for clients, including PepsiCo’s and Expensify’s first Big Game spot, and added that the Super Bowl is the stage where companies drum up awareness for their brands, so whether that should be dedicated to new or old products really just depends on the company.

That would explain why a company like PepsiCo or Anheuser-Busch, having widely-recognized 100- to 150-plus-year-old brands, would want to draw attention to newer, lesser-known ones.

For these venerable companies, a product launch could even “energize or reposition the master brand,” said Michael Sussman, the CEO of VMLY&R’s BAV Group.

“A new Doritos flavor signals to the wide-reaching Super Bowl audience that Doritos and Pepsi are receptive to change and have the needs of consumers in mind,” Sussman explained.

In the past, there have been certain products introduced in the Super Bowl that did not go on to become major hits with consumers like Crystal Pepsi, the clear cola that debuted during the 1993 Super Bowl with a now very dated ad featuring Van Halen’s “Right Now” (below) and was taken off the market a year later. (Crystal Pepsi was re-released for a limited time in 2015.)

The failure of Crystal Pepsi was not due to any marketing blunder, though, argued Brian Sheehan, a professor of advertising at Syracuse University.

“Whether the product succeeds or fails depends on what it has always depended on: how good is the new product or flavor,” Sheehan said. “There is an old saying that ‘nothing kills a bad product better than good advertising.’ That can be amended to say that nothing kills a bad new product better than Super Bowl advertising. It will drive lots of trial, but if the product isn’t what consumers want (e.g. Crystal Pepsi), retrial will be hard to come by.”

Karen North, Ph.D., a professor at USC Annenberg School for Communication and Journalism, said the Super Bowl ad for Crystal Pepsi may not have enticed consumers to buy that specific product but it probably helped drive sales to Pepsi nonetheless.

“[The Super Bowl] is not about selling the product, it’s about creating broad awareness,” North said.

One thing every executive interviewed for this story agreed on: creativity will always be king when it comes to the Super Bowl.

“Brands live or die by their creativity—a poor execution can be crushed by the weight of public opinion,” R3 co-founder and principal Greg Paull noted.