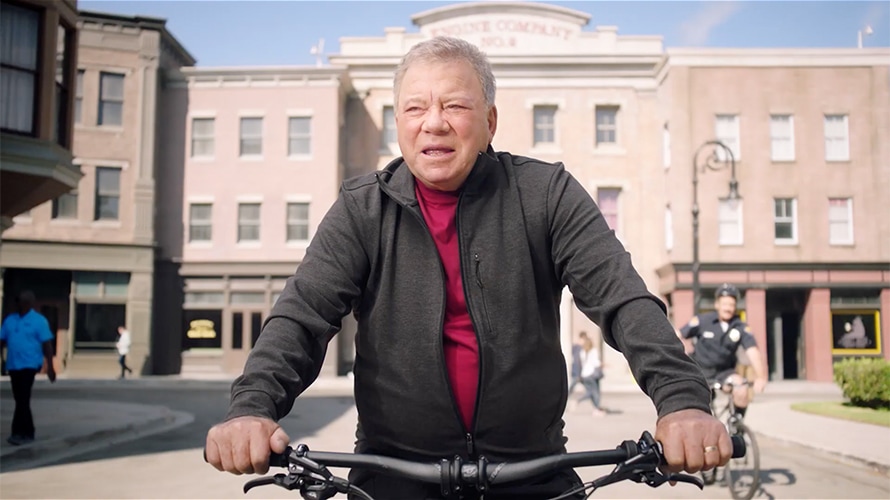 William Shatner, the Canadian icon best known for playing Captain Kirk in Star Trek, and the longtime brand star of Priceline.com, is lending his charismatic wit to a new company: Pedego Electric Bikes.

In a series of three chucklesome ads, Shatner, in his common breezy, buoyant manner, discusses the perks of riding a Pedego bike through ridiculous scenarios most people who actually ride the bike will likely never find themselves in. The 87-year-old Shatner, who has been a fan of Pedego since 2012 when he bought his first electric bike for himself and his wife Elizabeth Shatner, said he rides with his family “all the time” and it “makes me feel like a kid again.”

“Electric bikes are the path of the future,” Shatner told Adweek. “You get exercise. You don’t just sit there. … After you’ve gone a certain distance [pedaling], I don’t care how old you are, you think, ‘oh my god, now we have to turn around and go back the same way we came.’ With electrical power, that doesn’t have to worry you.”

Shatner had creative input on the making of the below ad, which he said was “great fun.” The spot, in which he dodges a traffic cop on his Pedego bike, also happens to be his favorite out of the three.

The ads from independent Los Angeles agency BPG began airing this month across Google, Facebook and other outlets nationwide.

“It’s not every day you get to work with a legend and an icon,” BPG CEO and partner Steph Sebbag said in a statement. “Mr. Shatner not only brings his one-of-a-kind personality to the table, he truly believes in the product he is endorsing. He’s one of Pedego’s biggest fans! And that adds a lot to the story.”

“I have them, I go bicycling with my family,” he said. “There are 15 members of my immediate family here in Los Angeles and we go out frequently now. The 13-year-olds to my age. The older people are able to keep up with the younger people because the electric power is there and no one is like, ‘oh god, let’s wait for old Dad here.’ You don’t have to. I’m right there.”

Watch below: Shatner riding his Pedego bike with a gospel choir tailing behind, singing backup to his sales pitches.

“[Shatner] is unbelievable. You would think he’s 27 years old,” said Pedego CEO and co-founder Don DiCostanzo, who also makes a cameo appearance at the end of the ad with the traffic cop (as Shatner suggested he do).

DiCostanzo said he was impressed by Shatner’s energy, having had stayed on set during the shooting of the ads for 12 hours and suggesting ways in which the scripts could be improved. Shatner also “treated all the crew like family,” he added. “He’s very humble.”

Shatner seems to have a knack for identifying rising brands early on. Being the face of Priceline.com since its early days in the late ’90s, Shatner really helped propel the little-known travel startup with its “Name Your Own Price” slogan into the mainstream.

DiCostanzo said he expects Pedego to have a similar long and “successful” partnership with Shatner.

“If a company like Pedego approaches me and wants to spend the time and money to use me to get promotion, they’re a forward-thinking company,” Shatner said, explaining why he agreed to the partnership. “Pedego itself is an elite company. Here’s a wonderful company in a really terrific business with great management. I thought, ‘wow, all the elements really come together.'”

Electric bike sales are on the rise, especially in cities, where people are increasingly looking for easier and greener modes of transportation. According to Forbes, global sales of electric bikes are expected to reach approximately 40 million units by 2023.

Founded in 2008, Orange County, Calif.-based Pedego sells and rents its electric bikes at its own 140 retail stores and at other various bike dealers. According to the company, the bikes have 250- to 500-watt motors that make it easier to tackle steep hills, and they can cruise for up to 60 miles on a single battery charge.

Below, watch Shatner uncomfortably intrude on a man’s proctology exam on his Pedego bike.