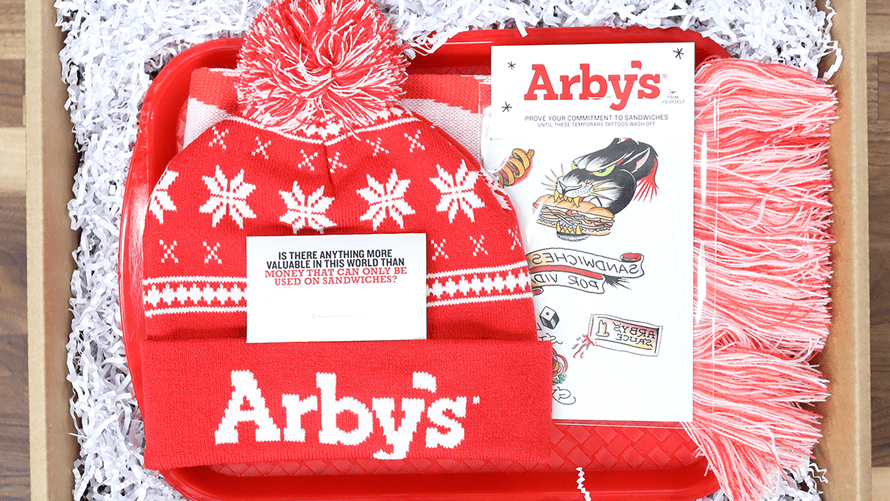 There's a new subscription box on the market, if you can get your hands on it. Arby's

Subscription services still seem to be all the rage, but the latest brand to hop on the trend might surprise you. Arby’s is officially in the subscription game.

The brand announced today, via Twitter, that it plans to roll out the Arby’s of the Month subscription plan for sandwich lovers across the country. “‘Arby’s of the Month’ is our way of giving back to our fans in a fun and unique way by providing them with the Arby’s branded merchandise they didn’t even know they wanted,” Jim Taylor, Arby’s CMO, said in a statement. Arby’s worked with agency partner Fallon on the concept for the subscription boxes.

Fans needed to be speedy to get their hands on these boxes, though, as Arby’s sold out in less than an hour. It’s unclear at this time how many subscriptions were up for grabs.

The #ArbysOfTheMonth Club is here. Sign up now to get 6 months of Arby’s-themed surprises. Click fast, ‘cause when they’re gone, they’re gone… https://t.co/myG57RIpM6 pic.twitter.com/aR6Kz1gVLK

For those lucky enough to score a subscription, a one-time $25 fee gets fans six months of Arby’s-themed boxes. Each month will be tailored to the current season and includes a few sandwich-inspired items. According to a statement from the brand, fans have been consistently asking for more branded apparel, especially after the launch of the brand’s meat sweats and its line of temporary tattoos.

The first box is designed to keep sandwich lovers warm during the cold winter months. It includes a red and white Arby’s pompom hat, a bacon scarf emblazoned with the Arby’s logo, an Arby’s dining tray (that doubles as your very own sled) and a set of the temporary sandwich tattoos. There’s also a note inside, signed by the “head of sandwiches,” that tells subscribers to throw away all of their other belongings because “you’ve got five more months worth of boxes coming your way.”

While the boxes are currently out of stock, fans can sign up to receive a notification when they are back in stock. Who knows what February will have in store! Perhaps some bacon scratch-and-sniff Valentine’s Day cards?