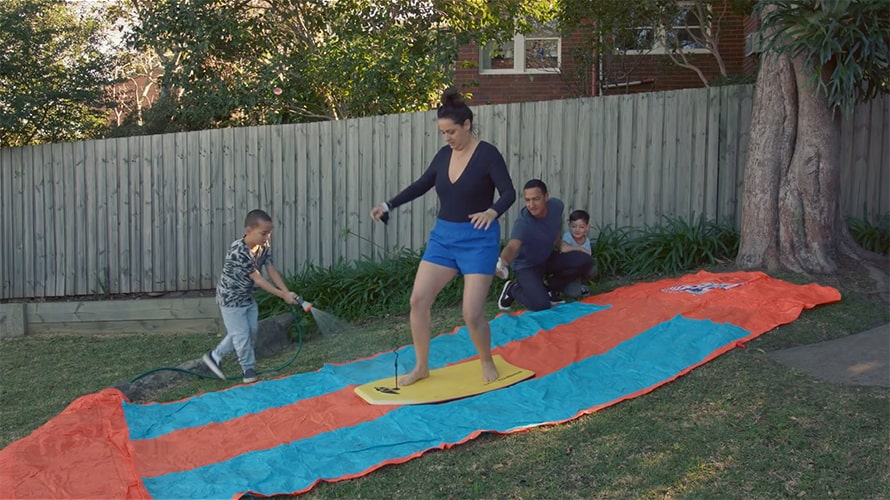 If you don’t already know of comedian and actor Celeste Barber, a quick search reveals that she has one of the world’s most popular Instagram accounts. The Australian star frequently contorts herself into awkward positions wearing only her—decidedly unsexy—underwear and has a huge fan base that includes style icon Cindy Crawford and a Kardashian or two.

Barber, who simulates high-end fashion shoots with a satirical flair for her millions of followers, has now partnered with Royal Caribbean to show you that some experiences simply cannot be recreated—for example, a Royal Caribbean cruise. In the spot, Barber takes on the challenge of attempting a number of standard cruise activities on dry land, highlighting the absurdity of trying to replicate the one-of-a-kind Royal Caribbean experience.

Barber recreates a number of cruise activities on dry land and it goes about as expected.

“As demonstrated by Celeste, endless experiences await guests onboard our ships, allowing travelers to holiday like never before,” said Susan Bonner, vp and managing director of Royal Caribbean Australia and NZ. “We’ve got you covered in terms of diversity, abundance and value.”

In the ad, Barber hilariously tries to reenact the ship’s simulated flying experience, known as the RipCord. In her DIY rendition, Barber climbs onto the family’s backyard trampoline and gets blasted with a leaf blower at full power. The cruise line’s Bionic Bar, which allows guests to get served beverages by an actual robot, becomes a seedy underground bar with unsavory characters in Barber’s re-imagining. She even stars in her own stage show “performance”—one people would probably pay not to see. Ultimately, Barber concludes that “trying to do all these activities on land with my family was completely exhausting and was going to leave me broke.”

Barber added, “The idea of doing them all on a fancy cruise with a glass of wine nearby was far more appealing.”

The Celeste Challenge video, which ran in its entirety on Facebook on Monday, is a collaboration with whiteGREY agency.