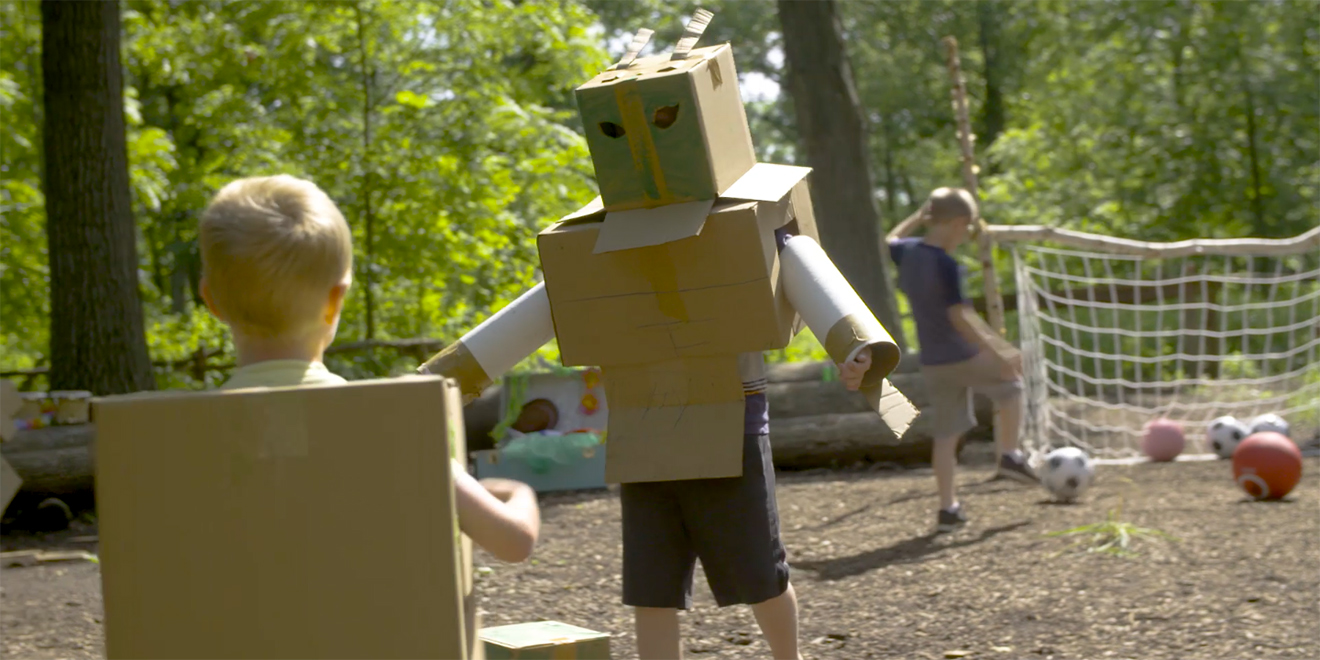 GoGo squeeZ created a play area that let kids invent their own games, then showed parents the results. GoGo squeeZ

For many children of the 1980s and earlier, unstructured free time was often the norm. Outside of sports and a few other after-school activities, these latchkey kids were frequently left to their own devices, and in this pre-smartphone era, parents could do little to monitor it all except tell them to be home by dinner.

Today, kids have far less unstructured play time, with many of their hours going to organized activities or being guided by parents—and research shows this could be hurting children’s development in areas like collaboration and problem-solving.

Now snack-pouch brand GoGo squeeZ and agency Edible hope to spark a conversation around this shift and encourage parents to open up more unstructured play for their kids.

The brand partnered with experts on child development and surveyed parents about how their children spend their time outside of school. The results show parents are aware that their kids’ time is highly structured but that they’re unsure how to solve that imbalance.

The brand is encouraging parents to embrace what it calls “BE Time,” set aside for kids to play in an unstructured and self-guided way. The marketing push behind the campaign includes a video from Edible, part of the Daniel J. Edelman Holdings network of agencies, about real parents discussing the issues around overly structured play, along with a 30-second TV spot from MatchMG.

“Kids today are facing unique challenges we did not experience when growing up,” says Helene Caillate, chief marketing officer for GoGo squeeZ. “‘BE Time’ is simply the time and space needed for our kids to nourish their imaginations, bodies and relationships. We could all use more BE Time, step away from the screens and be outside with the people we love.”

Here are some of the brand’s findings from researching modern childhood play time:

• 72 percent of parents feel they had more free and unstructured time as young people than their children do today.

• 76 percent say their children get too much screen time, a factor that often motivates adults to structure their kids’ time in a way that gives them something non-digital to do. The downside of this understandable trend, the brand said, is that children lose the opportunity to “self-direct,” which can have long-term benefits in development and happiness.

• 73 percent admit they organize their kids’ activities to help discourage screen time. As the video above shows, parents are often conflicted about the pros and cons of this approach.

"Boredom is often the canvas for creativity. It can lead to new interests and experiences."
Dr. Robert Murray, vice chair, Action for Healthy Kids

• 85 percent believe structured activities like sports and clubs lead to long-term success for children, but the brand cites Dr. Robert Murray, pediatrician and vice chair of the nonprofit Action for Healthy Kids, in noting that there are also proven benefits of unstructured play. “Self-directed activities with peers help build crucial social and emotional skills,” Murray says in a statement about the brand campaign, “which are actually a better predictor of future success in school and life than IQ.”

But as most parents know, simply telling children to “go play” often results in the same droning, groaning complaints of: “I’m boooooored!” And that, he says, is OK.

“Parents shouldn’t feel like they have to schedule activities to keep their kids constantly preoccupied—boredom is often the canvas for creativity,” the pediatrician says. “It can lead to new interests and experiences.”

To help encourage parents to make room for more unstructured play in their kids’ lives, GoGo squeeZ is taking up a few different initiatives.

The brand is asking parents to pledge to create an extra 30 minutes of “BE Time” for their kids each day, providing a counter on the campaign landing page to keep track of the total hours committed by parents. GoGo squeeZ will also be partnering with Action for Healthy Kids to provide three $25,000 grants for schools to create more “BE Time” spaces.