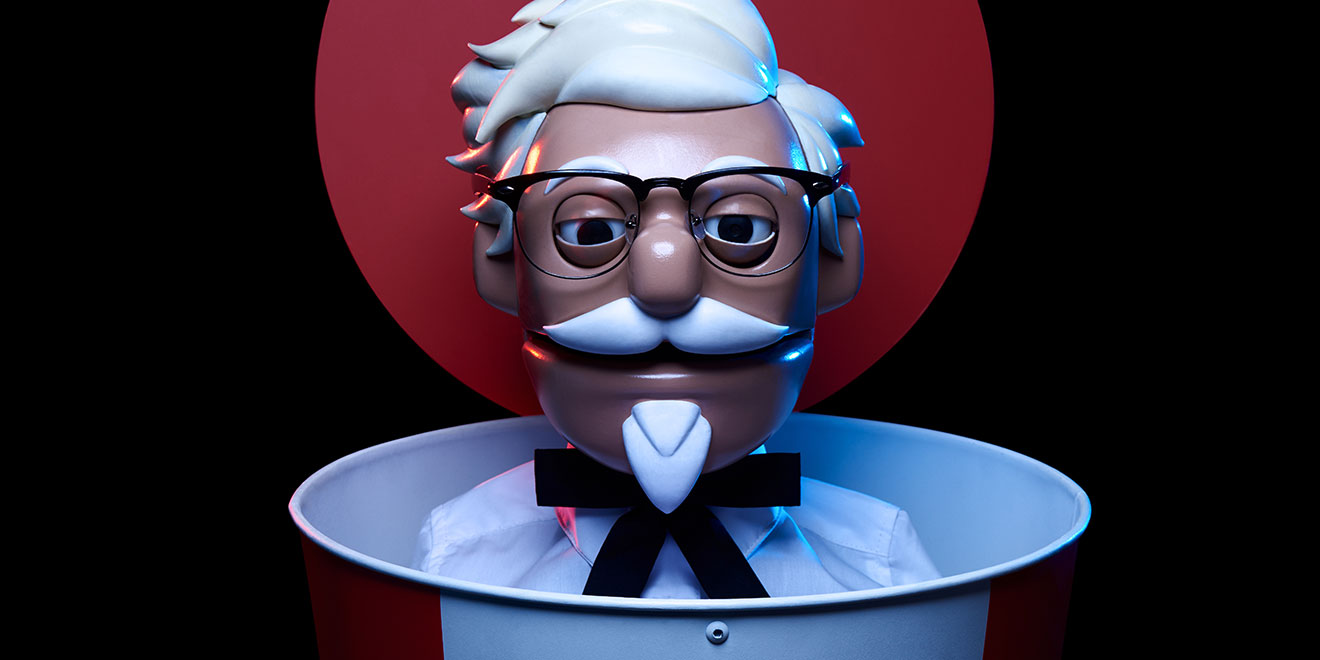 Wieden + Kennedy is back with another bot.

Six weeks after unveiling an animatronic sea creature for Old Spice’s S.Q.U.I.D. campaign, W+K wants you to say hello to—and maybe eventually order some fried chicken from—H.A.R.L.A.N.D., an animatronic Colonel Sanders head that speaks in the voice of the Colonel and is designed to physically pop up and take your order at a KFC drive-thru.

The announcement was timed to National Fried Chicken Day on Thursday, but clearly H.A.R.L.A.N.D. (short for Human Assisted Robotic Linguistic Animatronic Networked Device) has been in the works for a long time. It’s even been tested at an actual KFC location, W+K execs told Adweek at the Cannes festival last month.

The bot was developed by The Lodge, the design engineering group within W+K.

The bot itself, and the whole concept of an animatronic order-taking Colonel, are clearly a little goofy. And so W+K is leaning into that with its messaging around it, including a Funny Or Die video, which is more of a mockumentary than anything:

But while the angle is comical, it’s a serious project for W+K, as the agency continues to experiment with cutting-edge technologies like voice recognition, AI and bots and how they might be leveraged in brand work. Part of the challenge is to get the tech applications to align with the tone of the existing brand storytelling, which this KFC work does. The tech here is pretty impressive, too, as H.A.R.L.A.N.D. takes the words of an actual human KFC order taker and translates them into Harland-speak with little delay.

As is often the case with comical stunts like these, even the press release is tongue-in-cheek:

“What better way to celebrate National Fried Chicken Day than by ordering KFC from the Colonel himself?” said George Felix, KFC’s U.S. director of advertising. “We suspect drive-thru designers are heralding the H.A.R.L.A.N.D. technology as the greatest industry advancement since the addition of two-way communication itself. Not only do we have a real person as our historic brand icon, but now we have the ability to bring that real person back as a real robot. The future is now.”

For W+K and The Lodge, that’s actually not a joke.