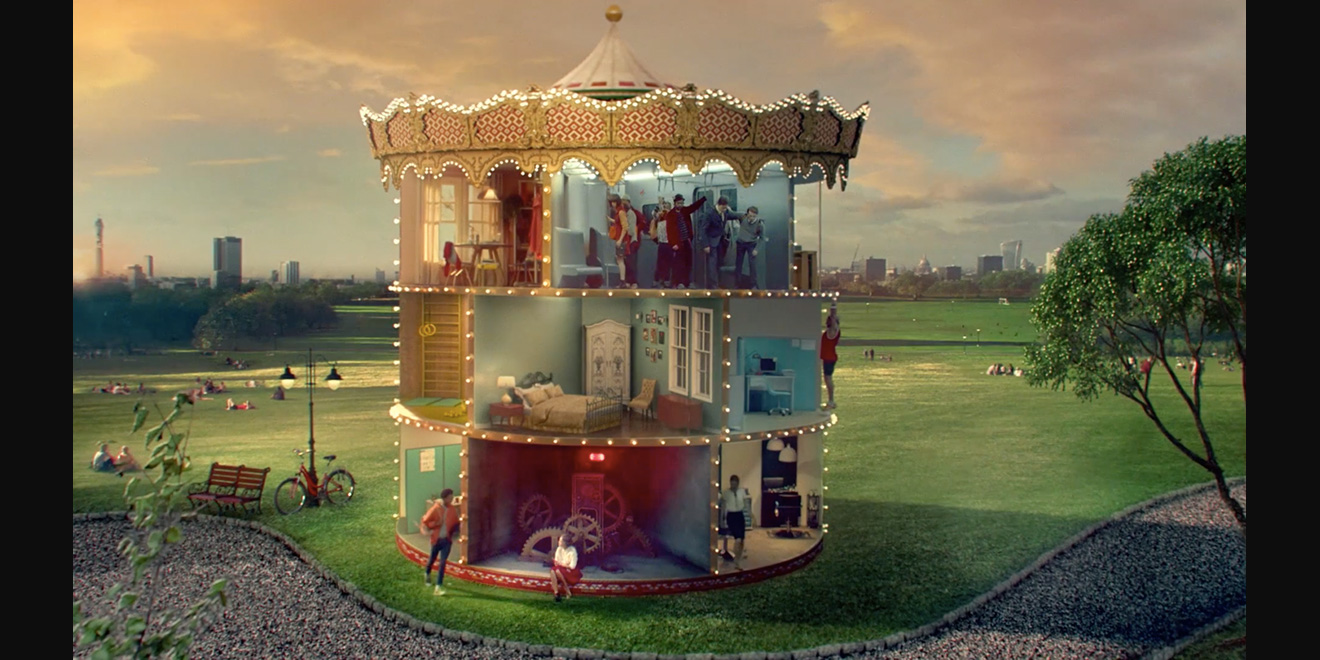 Some people take a roundabout approach to life, but this is ridiculous.

A young office worker’s grueling grind occurs entirely aboard a fantastical carousel in this musical, magical ad for Nestlé chocolate.

Her ride is no ordinary amusement-park attraction. Rather, it’s three stories high and consists of roomy compartments containing her apartment, her workplace, a fitness club, a subway car and other detailed, often crowded locations.

Round and round she goes, up and down, from room to room, yearning for a few minutes of peace. And a quiet place to to savor some Nestlé treats, of course:

“We saw a lot of people in social media saying they want to give up on the world, that there is no hope,” Rafael Donato, creative vice president at ad shop David São Paulo, tells AdFreak. “It’s easy to be overwhelmed with everything that’s happening. But chocolate gives you a great sensation—and while it doesn’t solve all the world’s problems, it does help you take a moment and deal with life.”

Brazilian singer Julie Ramos performs the upbeat tune toward the end of the ad, singing, “Stop the world, I want Nestlé!” which is also the campaign’s theme line. (It’s a play on “Stop the World—I Want to Get Off,” the ’60s musical about coming to terms with the everyday trials of human existence.)

The carousel conceit marvelously mashes up the whimsical spirit of childhood—time for carnivals and candy!—with a world-weary adult ethos, wrapping its promise of rest and respite in a whiz-bang visual metaphor.

“We actually built most of the carousel where the action takes place,” Donato says. “It was an amazing experience to walk into a studio and see a carousel with a subway, a classroom and even a gym. And the whole thing actually spun like a real carousel.”

At various points, the cast really did perform while the set was in motion, “so the acting was very physical—and sometimes exhausting,” Donato says. Coordinating camera movements was tricky, but the extra effort enhances the film. (The actors don’t just appear to be dashing from room to room in a crazy, outsized, rotating carousel—they really are doing just that.)

Director Rodrigo Saavedra keeps the actress in the spot front and center to provide a relatable focus amid the spectacle, a style he honed in efforts for Corona, Mizuno and Scrabble. (That said, there’s almost too much going on to fully absorb in 60 seconds, and you’ll need to give the clip a few spins to take it all in.)

As it turns out, Saavedra took a whirl at set decoration in a bid to make the production even more optically layered and engaging than the agency originally planned.

“We started noticing some props that were not in the boards nor in the script, like a vintage bicycle, a small car and even a rain machine,” Donato recalls. “At first we didn’t think anything of it. But as the shooting evolved, the director kept unveiling new rooms for the carousel” with more colorful, diverse props and elements. “He had this whole plan to make a bigger film, and didn’t tell us about it! So, the film grew right before our eyes, on set!”