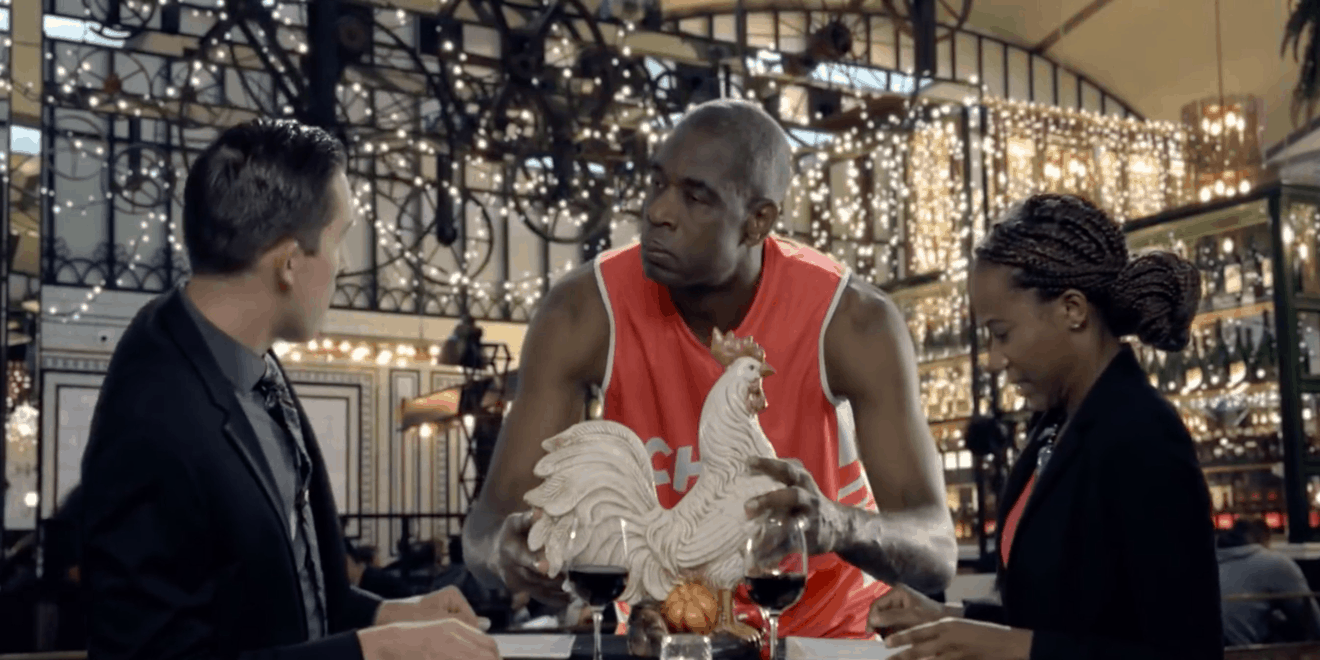 If you ran CHEQ, a cybersecurity outfit that blocks all manner of potential pitfalls for online advertisers, who immediately comes to mind as the perfect pitchman for your commercials?

Why, Dikembe Mutombo, of course!

What? You’re not sure who that is? Well, the 7 ft. 2 in. Mutombo specialized in blocking shots during his 18 seasons in the NBA, retiring a decade ago. Ultimately, such skills landed him in the Basketball Hall of Fame.

He also showed his particular set of skills in a classic Geico ad.

So … this dude blocked shots. CHEQ blocks ad fraud and so forth. It’s a match made in marketing heaven. Right?

Though the concept may sound like a stretch (and it most assuredly is), the affable, gravel-voiced hoop legend really scores in the goofy spot below, delivering 40 seconds of laudable low-brow comedy.

Mutombo begins by announcing, “CHEQ appointed me to be their chief blocking officer because I know how to block.” Demented demonstrations and wacky wordplay ensue, as our man enters various silly scenarios that feature building blocks, roadblocks, chopping blocks and even writer’s blocks. (Not that we ever suffer from … um … from … oh yeah: from THAT.)

For blockchain, Mutombo poses against a graffiti-covered wall like a ‘90s rapper, wearing a huge shiny block chained around his neck.

Things get ever-so-mildly saucy with, um, cock block, as he interrupts a hot date by slamming a rooster statue on a table. (It’s totally SFW. Though Mutombo does shout “cock block!” like he means it.)

The bottom line comes at the end: “Brand safety. Ad fraud. At CHEQ, we don’t just measure the damage. We block it.”

“Our founding team grew up watching 90’s NBA basketball and always admired Dikembe,” CHEQ chief executive Guy Tytunovich tells Adweek. “So, when we set out to communicate CHEQ’s real-time blocking capabilities to the ad verification industry, it seemed appropriate to partner with the NBA’s most iconic shot blocker.”

“We approached him out of the blue and discovered a brilliant, kind-hearted person who genuinely took an interest in what we were doing,” Tytunovich says. ”He also seemed like a great fit for our target audience, as many of the decision-makers in digital media today grew up watching him play.”

The in-house team that created the campaign chose to have some fun “because we feel that B2B marketing today takes itself too seriously,” he says. “Why can’t a B2B brand communicate itself as a B2C brand would? So, we stripped down the technical, sales-oriented jargon and just focused on building a fun story that sticks.”

He adds, “Many B2B campaigns try to educate their audience from A to Z in one fell swoop, but that’s not necessarily interesting or impactful. We’d much rather focus on our one core differentiator—blocking—and own it completely.”

Fair enough, though perhaps Mutombo’s presence would’ve resonated more strongly for consumer ad-blocking software, rather than technology that fights ad fraud and helps marketers avoid appearing in unsavory environments. (Hey, he’s a very big guy. We’re not gonna say that to his face!) Anyhoo, the video will appear in B2B environments, targeting a corporate audience, which should prevent confusion.

“Since the campaign revolved around blocking, we just couldn’t resist,” Tytunovich says. “When uttered by Dikembe with that dead-serious expression, it was priceless. More seriously though, it’s a contemporary part of our generation’s language, and if we want to communicate our company’s culture, then when we shouldn’t be afraid to speak that language.”

This week, Mutombo can’t be blocked from enjoying a renaissance, it seems, as he also appears in the NBA’s Martin Luther King Day promo.