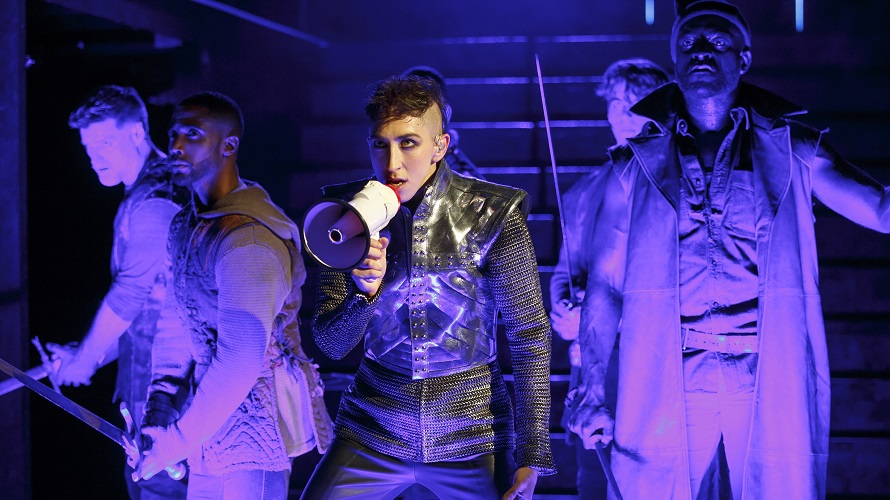 Jo Lampert as Joan of Arc

A lot can happen in three months.

On April 3, Sara Holdren, a theater director, theater company owner and formal student of the art published a review on CultureBot of the Public Theater production Joan of Arc: Into the Fire. It was her first published theater review, to go along with academic writings that culminated in a 2015 MFA from Yale Drama School.

While there aren’t too many reader comments sitting below the piece, what is there amounts to a cumulative, powerful rave:

John Geoffrion: This might be the greatest theater review I’ve read in years. Thank you.

Donald Farwell: I second Mr. Geoffrion’s sentiment. Your review is as perfect as David Byrne’s work is awful.

Cassandra: This is by far the best review of any production that I’ve ever read (I’ve read it 4 times since it was published because it just gets better and raises new questions for me every time!) Thank you so, so much for your words and your ability to question our motives and the resistance vs. “the resistance” in this difficult time.

In an interview with American Theatre magazine, Holdren confirms that the CultureBot piece caught the attention of the folks at New York magazine and put on her a path to becoming, at age 31, the publication’s next theater critic. She starts Monday.

Holdren’s unlikely leap to a primary tier of New York theater criticism, on the wings of her first non-academic review, is a miraculous legacy for the widely panned Joan of Arc: Into the Fire. She explains to American Theatre EIC Rob Weiner-Kendt how she was inspired to write the article, and adds:

“The thing that makes me laugh a bit about having that be the only piece of writing out there by me is: I promise not everything makes me that mad! I also really enjoy things, and I have found myself frustrated when I’m in a room full of creative people where somehow enjoying something or having fun is seen as uncool, where someone is afraid to say, “Well, I really liked that.” …

“I don’t identify as a John Simon-style critic. I don’t revel in the art of slicing things up. I really believe in trying to grapple with each piece and making an honest effort to see what it’s trying to communicate.”

Holdren replaces Jesse Green, who moved over to the role of New York Times co-chief theatre critic. We can’t wait to read her second published review!