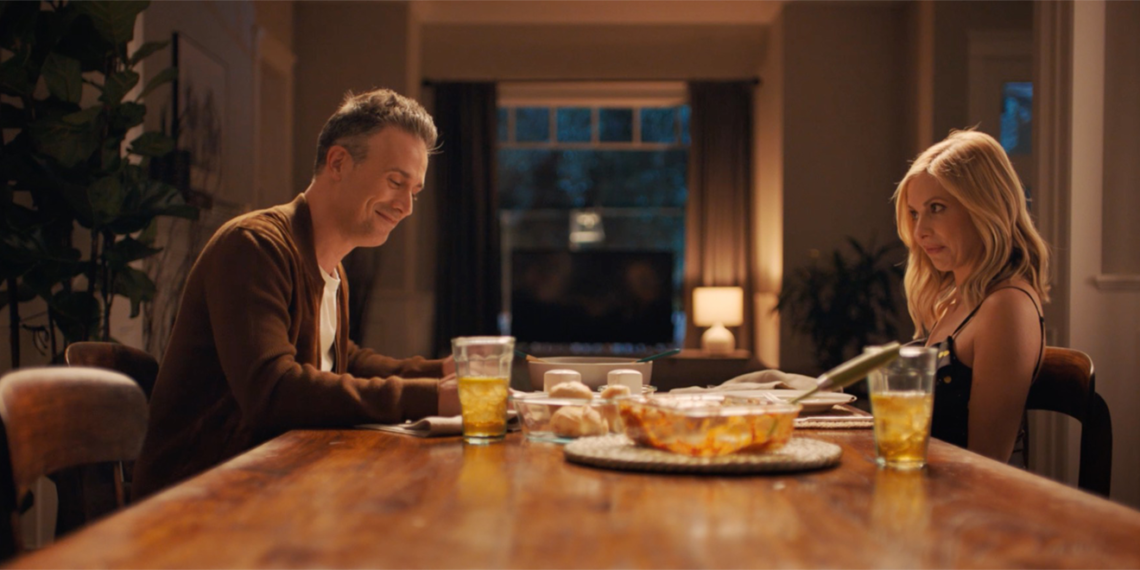 They're getting ready to 'do it,' but not how you think. P&G

Now we know what keeps ‘90s power couple Sarah Michelle Gellar and Freddie Prinze Jr. going strong after all this time: They do it a lot, they say. Every night, in fact.

But it’s not what you think, except when it’s precisely what you think. Mostly, though, the celebrity duo is talking about after-dinner dish duty for a new earth-friendly campaign for Procter & Gamble’s Cascade.

For the record, Gellar has said in interviews that a sense of humor, good communication and hard work keep her 20-plus year relationship on track. But that’s not a product pitch, now is it?

Gellar and Prinze, who initially met on the set of 1997’s teen slasher flick, I Know What You Did Last Summer, star in a 60-second Cascade video from M Booth that’s filmed in a homey kitchen.

The Hollywood pair speaks directly into the camera, laying the foundation for what seems like an intimate chat about a sensitive subject. (Soundtrack: treacly instrumental music). They want to discuss an issue “affecting millions of households” that they “care passionately about.”

“Doing it every night,” Gellar says.

It turns out they’d only been doing it “once, twice a week until recently,” says Prinze.

Now they’ve switched from their intermittent habit to something more consistent, doing it “when the kids are asleep,” “after lasagna night,” and, for sure, “after takeout.”

They get to the reveal quickly, so there’s not too much time for everyone’s gutter brains to run amok. Instead of hand washing their dishes, which is a notorious water waster, they run the dishwasher, they explain, even if there are only a handful of platters, glasses and utensils.

The message, dubbed “Do it every night,” would seem counterintuitive, but the conservation is real, according to the brand.

Energy Star-certified dishwashers use less than four gallons per cycle, the short film says, while most people use four gallons of water every two minutes when they hand wash.

“The average person spends 15 seconds hand washing a dish,” the brand says in its press release. “In that time, the sink uses a half-gallon of water. That’s why running your dishwasher with as few as eight dishes is all it takes to save water.”

For those who dig the math, here’s a breakdown. If you prep at least two meals a day for a family of four, running the dishwasher could save more than 75% in energy and water costs. That amounts to $1,300 over the lifetime of the dishwasher.

No doubt, it’s more efficient to run full loads, says Martin Hettich, vp of P&G’s North America Home Care business. “But we found that most people wind up hand washing dishes while waiting for the dishwasher to fill up, unintentionally wasting water. That’s why we think it’s important for people to know that the dishwasher doesn’t have to be completely full to be water efficient.”

Gellar and Prinze are frequent home cooks who bought into that popular misconception. “Now that we know that we can save up to 100 gallons of water a week by skipping the sink and running our dishwasher at the end of the day, we’re doing it more often to help save water,” Gellar says in a statement.

The P&G brand, around since 1953, is reacting in part to a new study from the World Resources Institute that found in-home water usage is growing at a faster rate than every other sector, including agriculture and industry. The marketer aims to offer easy, everyday tips to combat water waste.

And Cascade debuts the new work as another piece of its sustainability efforts, having joined the Bonneville Environmental Foundation’s Change the Course campaign to provide fresh water to critically dewatered rivers and wetlands in the Western U.S.

“Do it every night” hits digital and social media this week, with a separate national TV spot with a diverse array of regular folks (not A-listers) to debut Feb. 24.