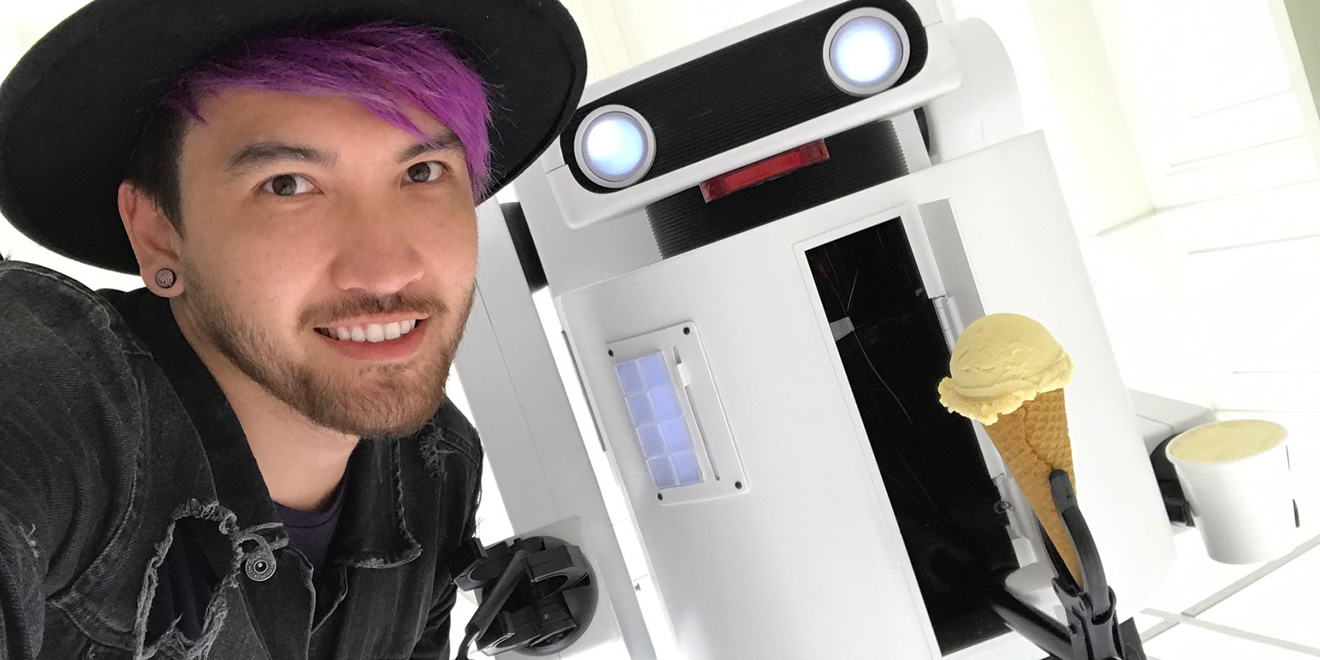 The director Mike Diva with the robot built for the spot by his friend Fon Davis.

You’ve probably seen the dystopian Halo Top ice cream commercial by now—the one directed by Mike Diva, the popular YouTuber with the twisted sense of humor. We wrote about it last week, and it’s also been playing in front of the movie It at cinemas.

For a brand on the rise, it’s a subversive commercial indeed—so bleak it’s funny, but not exactly casting the product in the best light. To learn more about how the spot was made, and why Halo Top greenlit it, we called up Diva for a chat.

Check out our Q&A below to hear how Four Loko played a role in concepting, whether the spot was intended to be as Kubrick-esque as it feels (the location of the set had a lot to do with that), and how the lyrics in the happy-go-creepy original song created for the soundtrack are way more fucked up than you knew.

AdFreak: Was this the first ad you’ve made for a brand?
Mike Diva: No, I’ve made a handful of commercials. I did a couple for Yelp. I’ve done some for Mobile Strike. This was the first commercial where I wasn’t stifled creatively at all. It was a really amazing opportunity, and a blast to make. Justin [Woolverton], the CEO, trusted me to just do whatever. I’m also working on a few commercials for the L.A. Metro, which are also absolutely insane. I can’t believe I’m getting away with this stuff.

Did Halo Top get in touch? What did they say they wanted?
I guess the CEO has been a fan of my stuff for a while. He basically just said to me, “We already have enough commercials that explain why Halo Top is awesome. We just want something in your style that just grabs people’s attention.” I came back and pitched my idea in person. It’s one of those things where I felt like, if I just sent it to him over email, I would sound like a crazy person. I had to get in front of this dude and illustrate why it’s going to be funny. On paper, it just reads like it’s super dark, you know? I downloaded a text-to-speech app and kind of acted it out, and played the robot parts on my phone, so he would understand why it’s funny for the robot to say “Eat the ice cream” a bunch of times.

Where did the story idea come from?
Four Loko! I’d been trying to come up with an idea for this thing for a long time. For one, the idea of coming up with an ice cream commercial that’s creepy enough to capture the internet’s attention—it’s a huge challenge. The other challenge was making it different enough from the other weird ice cream commercials on the internet, from five years ago or so, from Little Baby’s Ice Cream. I don’t know if you saw those.

We wrote about those, yeah.
Yeah, the challenge was—there’s already a weird, crazy ice cream commercial out there. I’d kind of been banging my head against the wall. Then one day, my producer, Josh, and my DP, Aaron, came over with a bunch of Four Loko. He saw them at the store and thought it was funny. So, we sit down and just lock ourselves in the house to come up with this idea. After I had enough Four Loko in my system, I came up with it, and they thought it funny. And that was it. It’s the worst origin story for this thing, but it’s kind of funny to me.

Some people have called the ad Kubrick-esque. Is that fair?
A lot of people are drawing comparisons to Kubrick and saying it’s a take on 2001: A Space Odyssey. That it’s a direct homage. I actually didn’t want that at all. I had reservations about shooting in the 14th Factory Space Odyssey set. I didn’t want people to associate it with Space Odyssey just because there’s a robot in it. We yanked out all the furniture and redressed the entire room to make it look as different as possible. But of course, we still ended up getting a lot of those comparisons.

Ah, so you shot it at the 14th Factory.
Yes. They have this re-creation of the Stanley Kubrick Space Odyssey room art installation. In the script, I just wanted a large, white, empty room with just a few things in it. But the bottom-lit floor in this place was just so cool, we couldn’t pass it up. 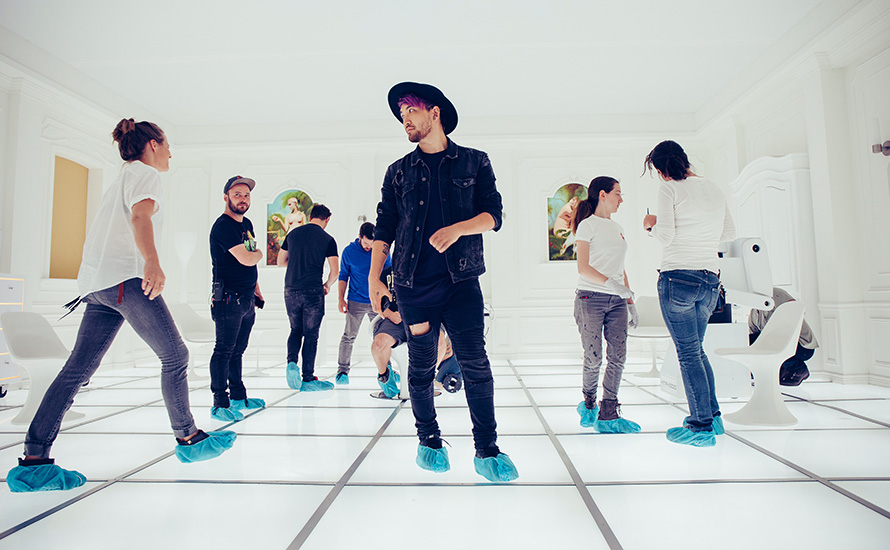