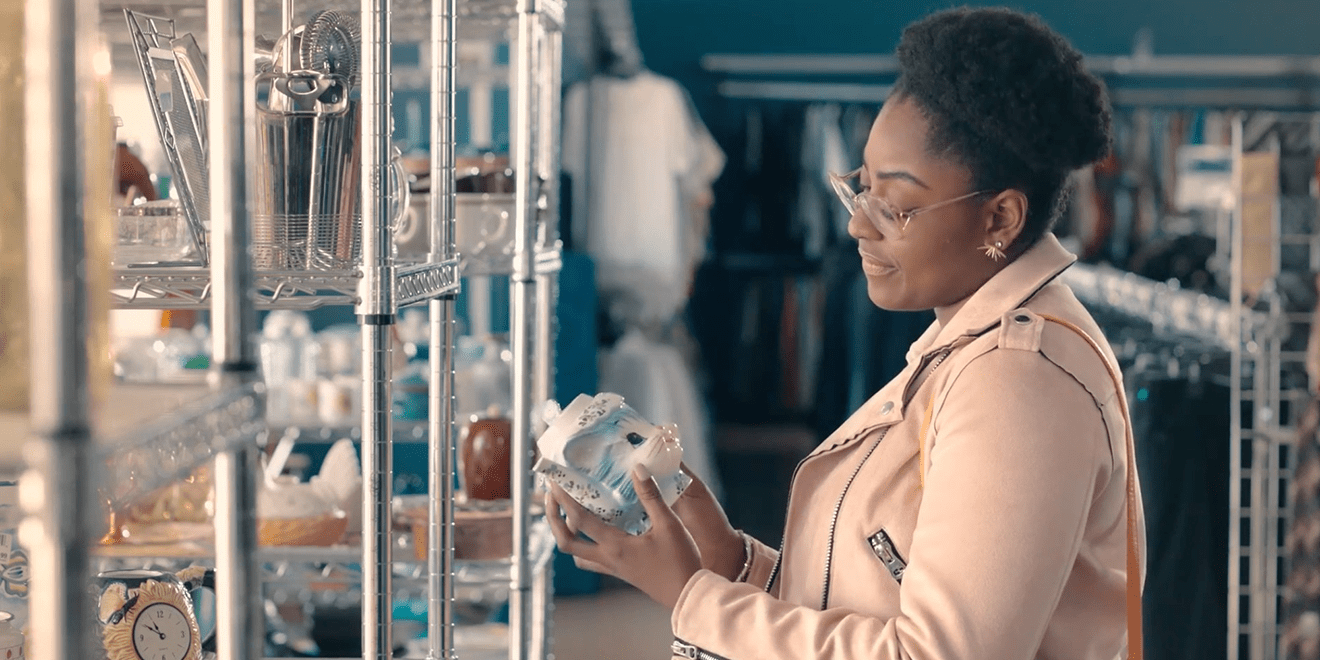 With NFL and college football season officially upon us, there no doubt will be some nail-biters for fans to endure over the next few months. Having a little fun with this notion, Goodwill has released a tongue-in-cheek PSA film that turns a mundane trip to one of its stores into an event that has an entire town on the edge of its seat.

In the ad, a woman contemplates whether or not she should purchase a quirky cat teapot she’s spotted on the shelf at Goodwill. As she mulls it over, a few fellow shoppers give their stamp of approval and encourage her to get it.

But they’re not the only ones hoping she’ll make the purchase. It turns out her Goodwill shopping experience is being broadcast live on local TV stations, as viewers wait in anticipation to see if she’ll ultimately decide to go ahead and get the teapot. The ad shows all sorts of people—including families, restaurant employees and gas station attendants—glued to their TVs and phones as they anxiously wait to see what the verdict will be.

When she puts the teapot down and decides to walk away, the crowds watching throw their hands in the air in exasperation. But when she quickly changes her mind and goes back to retrieve it, viewers jump up with delight and begin cheering and hugging.

“When you bring home a Goodwill find, you give your whole town a reason to celebrate,” conclude the PSA, explaining that each purchase funds things like job training and placement programs—and therefore helps locales and their citizens thrive. According to the nonprofit, more than 87 cents of every dollar spent in its stores nationwide is reinvested in communities across the country to support job training programs and provide community support services for job seekers.

The pro bono “Bring Good Home” campaign, which includes include TV, radio, digital, social, print and out-of-home elements, was created in partnership with Digitas and the Ad Council. On social, Goodwill is encouraging shoppers to show off their best finds with the hashtag #BringGoodHome.

“With ‘Bring Good Home,’ our team wanted to depict the fact that there’s no small find at a Goodwill thrift store,” said Atit Shah, chief creative officer for Digitas North America. “People don’t realize that buying that ironic T-shirt or kitten-shaped teapot at a Goodwill store actually fuels local job training and career opportunities right in their community. You’re actually adding to the neighborhood fabric, and giving your whole town a reason to cheer.”

The new campaign is an update from one that ran in 2016 via the Ad Council and featured miniature figurines performing a variety of jobs alongside life-size donated objects.

“‘Bring Good Home’ takes our campaign in a new direction with heartwarming ads that celebrate shoppers for helping their neighbors who face barriers to employment,” said Ad Council president and CEO Lisa Sherman.

The organization’s partnership with Goodwill, which began five years ago, has resulted in over 360 million pounds of donations to date.