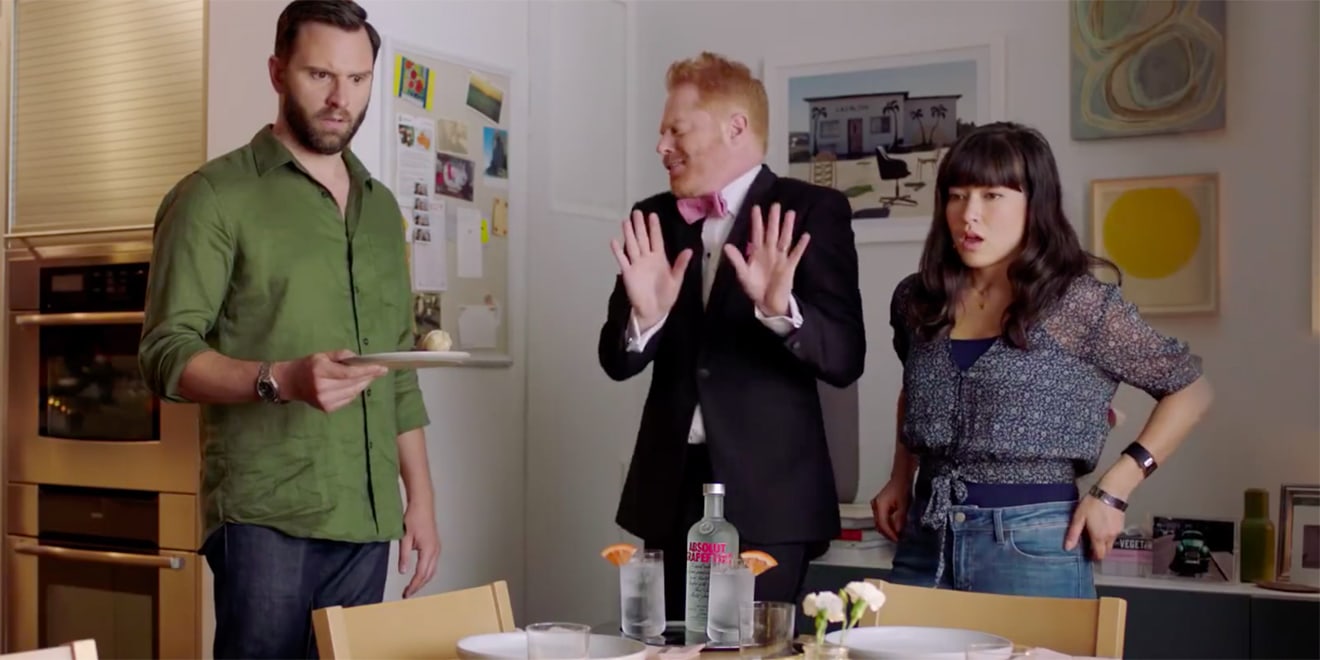 Sometimes, advertising can make you just … happy. I mean, not all the time (hence ad blocking and skipping) but once in a while, something appears that ticks the joy box.

A new ad for Absolut, a brand that has a pretty good handle on how to market well (understatement), leverages the comedic and musical gifts of Modern Family’s Jesse Tyler Ferguson to promote the fact that it doesn’t use added sugar to flavor its grapefruit vodka and it’s a hoot.

The 30-second ad is the anchor of the series as Ferguson crashes a yet-to-start dinner party. As the couple gets ready to welcome guests, the “chef” emerges from the kitchen asking his partner whether or not she wants to try the chicken (which he boiled). Awkwardness and the social code kicks into gear as the woman tries to deflect saying, “I’m full. I’ll wait.”

Right on cue, Ferguson arrives with a tray of Absolut and beings to sing a catchy tune, the lyrics of which are worth printing in full:

She hates your cooking. You can see it in her eyes.
She’s being polite and saying she’s full, more like full of lies.
It’s not personal. It’s just your Chicken Surprise—and what is that rice?
And somehow even the bread and the butter, literally everything on that table is disgusting.

The Modern Family star does a spectacular job of not sugar coating it, which is precisely the point.

But the fun doesn’t stop there as Ferguson stars in 10-second vignettes that are equally hysterical and feature familiar scenarios like inviting the office snob to happy hour (to pay for it), lousy house parties, cheating in trivia and trying to avoid paying for brunch. The uber-short form is a nice compliment, and a perfect length as the joke could get old, but with Ferguson at the helm, it’s highly unlikely.

Let’s be honest, the casting of Ferguson is pretty dead on and there is a sense of authenticity, as the actor is a fan of the brand, which has long taken action on inclusivity, diversity and openness.

“I’ve always felt a connection with Absolut because it was one of the first brands I knew showing support for the LGBTQ community, back when it wasn’t necessarily in vogue,” he said. “With the #NoSugarCoating campaign, we’re harnessing that same irreverence by using humor to inject more honesty and less sugarcoating in day-to-day life–something that I think is super refreshing and relevant in society today.”