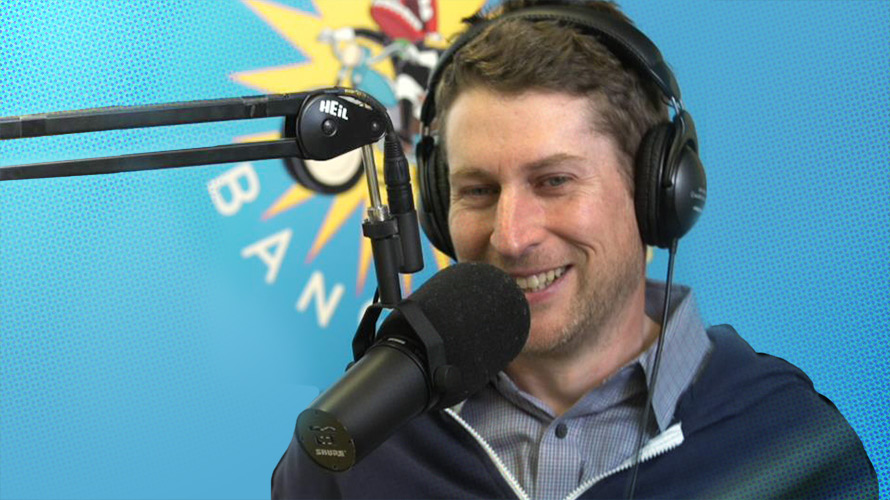 Comedian Scott Auckerman started his podcast as a radio show and has seen the industry change over the last few years. Courtesy of Comedy Bang! Bang!

With tons of publishers and content creators turning to podcasts, it can be tough to make your show unique.

Podcasting as a medium started with the rise of iPods and other portable audio devices. At first, downloading a podcast then manually transferring it to an audio device was an arcane process few were brave enough to take on. As technology evolved and streaming became the new normal, shows like Serial and various NPR programs helped bring podcasts into the modern era.

In 2009, in the middle of podcasting’s first boom, Scott Aukerman launched Comedy Bang! Bang!, a comedy/variety show meant for his friends in the industry. The show became one of the first podcast-to-TV series when it evolved into a show on IFC. Aukerman’s guests include fan-favorite comedians as kooky characters alongside celebrities willing to have some fun while promoting a project.

Aukerman’s first iteration of CBB was an interview-style radio show. But when a station manager pointed out that listeners might want to actually hear some comedy instead of just people talking about it, he made the change.

“I wanted to make the show stand out, so we decided to turn it into more of a variety show,” Aukerman said.

Aukerman’s first episode as a streaming radio show had 500 listeners across the country. When he started uploading it as a podcast, he saw 2,000 people listening right from the start thanks to a built-in fan base and social media followers.

“Instead of being like other podcasts of just buddies talking to each other, we became a place for real people and fake people to talk to each other for a while,” he said.

“All you need are some mics and some friends to get started,” said Aukerman, “and somewhere to host your show online.”

“If you’re a comedian now, stop doing a podcast! There are too many,” Aukerman warned. “We don’t really need any more interview podcasts out there.”

A year into Comedy Bang! Bang!, Aukerman and his partners launched the podcast network Earwolf.

The network’s goal was to make content totally different than other podcasts out there. It was also in a pre-Serial world, before advertisers and listeners had fully discovered what podcasts could be. They wanted to “create comedy, not talk about it.”

“People who listen to podcasts frequently enough start to think they’re friends with the hosts,”Aukerman said.

He compares it to the time he ran into someone he thought was a friend in a Los Angeles bar but who turned out to actually be a cast member from Real World. Podcasts are an intimate listening experience in which audiences invite shows and their hosts directly into their ears or at least into their down time. Because of that, they become invested in those relationships and stories.

“Comedy Bang! Bang! is only successful because of the relationships between me and the performers, both on and off the show,” Aukerman said. “If I did an episode of just talking to real people, people would complain about the lack of characters.”

Many of the recurring characters on the show are Aukerman’s close comedian friends, some of whom didn’t really do comedy outside of stand-up but decided to try out some bits on the show. In its early days, people would also read comedic pieces they’d written.

“I think I’m the worst part of any episode,” he said. “My friends are the staples of the show.”

Aukerman is the first to admit how difficult it was to sell Comedy Bang! Bang! to advertisers initially. Not only is the premise of the show slightly difficult to grasp (“some comedians play weirdo characters and talk to each other”), it was also hard to book guests.

People come by to promote new projects, but halfway through the conversation, a character pops in to delightfully derail things. That can make it difficult for noncomedians to get comfortable with the set-up, but some people would much rather help others goof around than talk about themselves for the whole time.

It can be tempting to shuffle your podcast’s format over time to see if one style works better than another, but once you have an established audience, they’re fans for a reason.

Comedy Bang! Bang! is often longer than the generally agreed-upon podcast running time of 35-40 minutes, but Aukerman said that’s because he respects his guests and the conversations with them. By understanding what his audience has come to expect, he knows the content will satisfy them, and sometimes that will mean taking a little more of their time.

“We have incredible people on the show,” he said. “It’d be a huge disservice to them to talk to them for five minutes before getting interrupted by a wacky character. So, that makes our episodes maybe twice as long as your typical commute-length podcast.”

Some CBB fans often tell Aukerman they wish episodes were longer or more frequent, but he’s stuck to what makes the show work: interesting interviews and funny conversations with beloved characters.

“There are things we could tweak if we wanted to get Serial or WTF [with Marc Maron] numbers, but those things would change the show too much,” he said. “We know what feels right for our show, and so does our audience.”