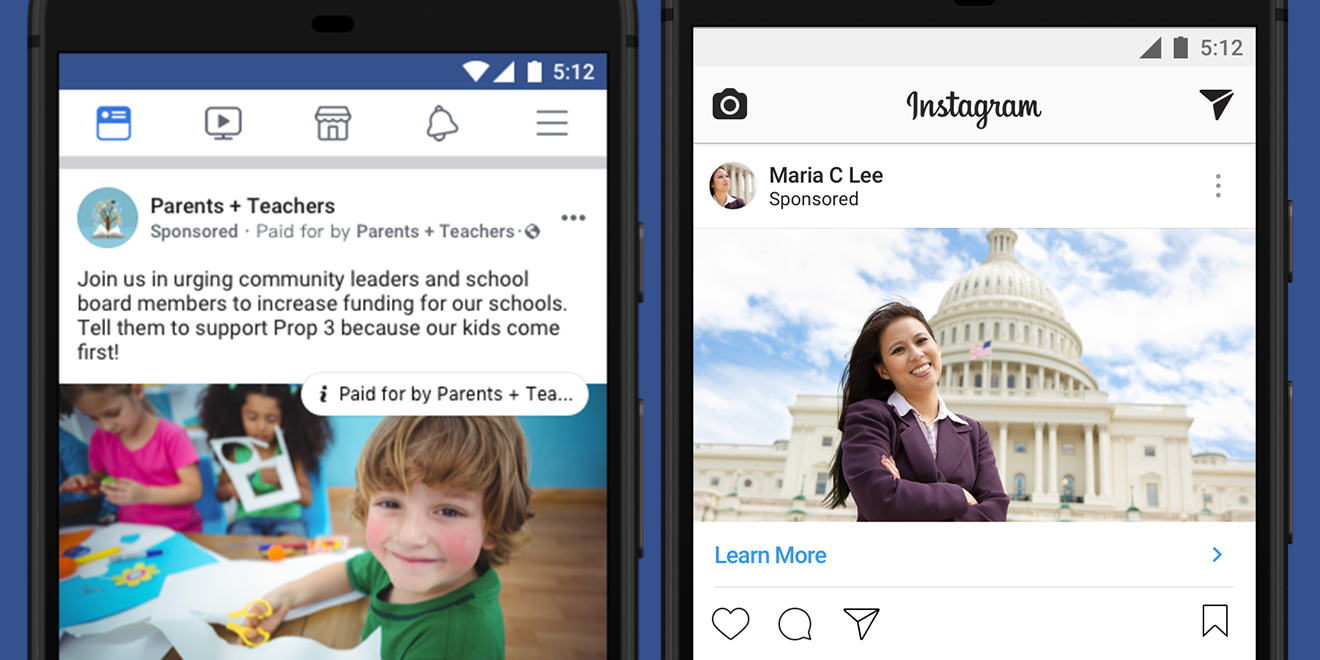 Facebook announced today that all election-related and issue ads in the U.S. on both Facebook and Instagram must now be clearly labeled, including disclosures at the top of the ads revealing who paid for them.

Twitter revealed a similar tactic Wednesday, saying that it was teaming up with nonprofit civic organization Ballotpedia to create election labels for the accounts of candidates running in the 2018 U.S. midterm elections.

Facebook director of product management Rob Leathern said the company is giving advertisers “a short window of time—the next week or so” to make sure they go through this process before they are prevented from running ads.

Global politics and government outreach director Katie Harbath added that Facebook plans to roll these tools out more globally “in the coming months.”

Facebook announced earlier this month that it planned to hire as many as 20,000 more employees by the end of 2018 to work on everything from offensive content to election integrity, and the social network said Thursday that 3,000 to 4,000 will work on this initiative.

As previously reported, advertisers that seek to run ads with political content in the U.S. must verify their identity and location. Part of that process: putting in the last four digits of your social security number, a picture of a government-issued ID and a U.S. mailing address.

Leathern said revealing where the money behind the ads came from is especially important when that information doesn’t match the page name, adding that when Facebook or Instagram users click on those labels, they will be taken to this archive, which will provide information including the campaign budget associated with the ad and how many people saw it (as well as their ages, locations and genders).

The archive is available globally, and it will contain ads and political issue content run by advertisers for up to seven years from the day they run. Harbath added that the seven-year time frame was chosen in order to include a full U.S. Senate cycle of six years in the process.

Facebook began populating the archive in early May, Leathern said, starting with ads from advertisers that have completed its authorization process, and it is now adding ads that were determined to be political.

Learthen added that Facebook will work with the Election Commission it announced in April “and other stakeholders” to create an application-programming interface for the archive, enabling access for “outside experts, researchers and academics to conduct their own analyses on this data.”

Leathern also encouraged users to become more involved with helping to monitor political ads. Users who deem ads suspicious can tap the three dots in the upper-right-hand corner and select “report,” followed by, “it refers to a political candidate or issue,” and if the ad violates the social network’s political advertising policy, it will be removed and added to the archive mentioned above.

The advertisers behind those ads will then be banned from running ads containing political content until they complete Facebook’s authorization process, and users who report these ads will be updated on steps that were taken.