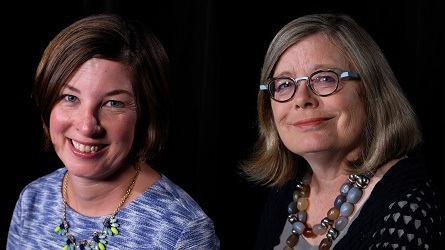 Noreen Gillespie helped create AP’s first regional desk in Atlanta. Sarah Nordgren meanwhile during her career with the wire service once served as director of state news, overseeing operations across all of AP’s state bureaus.

The two (pictured, l to r) have risen impressively through the AP ranks and are now both newly anointed deputy managing editors. Gillespie will oversee U.S. News, while Nordgren will be tasked with keeping things running smoothly in Sports, Business News, Entertainment and Lifestyles. Each will transition shortly at the New York office to their new role, alongside a third major promotion announced today, Lisa Gibbs, named director of news partnerships.

Per an internal memo from AP senior vice president and executive Sally Buzbee:

Sarah, a mentor to many across the AP and a journalist of wisdom and creative ideas, has for the past two years served as operations director for U.S. news, helping to roll out new storytelling techniques such as story summaries and The Latest, working on cross-format integration and managing budgets. She has also served as executive director of Associated Press Media Editors, an industry group that includes 3,500 media organizations, a role she will continue in for a few more months.

Both Nordgren and Gillespie will report to AP managing editor Brian Carollivano, who has high praise for both of his new charges. For example, of Gillesspie, he says, “Noreen is one of our most creative, charismatic and gifted journalists and leaders. Her enthusiasm and passion for the work we do infuses everything she touches.”